Nokia Sitting Pretty After Week of Turmoil for Huawei, Ericsson

Nokia CEO Rajeev Suri and his gear-making colleagues may feel Christmas has arrived a few weeks early this year. First, US and Canadian authorities arrest Meng Wanzhou, the chief financial officer of China's Huawei, in a sure sign that further trouble lies ahead for the Chinese equipment giant. Then some faulty software in Ericsson's network gear leaves millions of smartphone users globally without Internet access. With all the negative publicity about rivals, Nokia chiefs must be as chirpy as Santa's elves. (See this story on our sister site, Telecoms.com, for a similar take on Nokia's prospects.)

As Happy as Suri 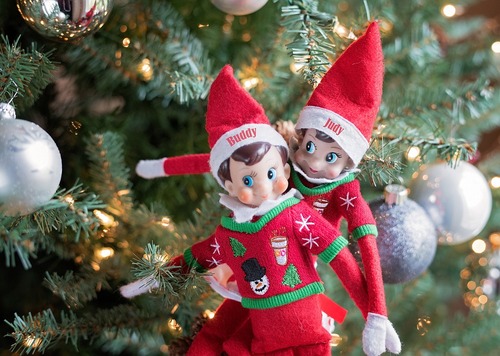 The Finnish equipment maker will naturally seize any opportunity to capitalize on its rivals' problems. So far, it has not had the best year. Profitability suffered in the first half as it pursued new 5G deals, and a cost-saving program has not delivered sufficient benefits. Announcing third-quarter results in October, Nokia Corp. (NYSE: NOK) said it would look to cut another 700 million ($797 million) in annual costs over the next two years. (See Nokia Warns of Job Cuts in 700M Shake-Up.)

Moreover, since 2015, including the Alcatel-Lucent business it bought a year later, Nokia's revenue market share has dipped three percentage points, to about 17%, according to fresh data from market research firm Dell'Oro. Ericsson AB (Nasdaq: ERIC) is down just one percentage point, to roughly 14%, over that period. But Huawei Technologies Co. Ltd. has been the real winner: Despite long-running concerns about the Chinese vendor, its market share is up from 24% in 2015 to about 28% this year, says Dell'Oro. 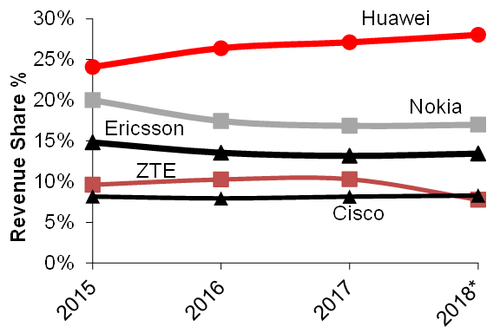 That now looks set to change as US authorities tighten the screws on China's biggest technology export. Hawks in the US administration say Huawei remains a "bad actor" that flouts international sanctions, rips off intellectual property and feeds customer information back to the Chinese government. The US is now actively lobbying European governments to exclude Huawei from their telecom markets, says a Huawei spokesperson. Authorities in Australia and Canada have already blocked Huawei from their 5G markets. According to a Reuters report, Japan is now moving to ban Huawei from tenders for government contracts as well. (See New Zealand blocks Huawei from 5G deal with Spark and Australia Excludes Huawei, ZTE From 5G Rollouts.)

In markets where there is no official ban, operators may be weighing their options. Germany's Deutsche Telekom AG (NYSE: DT), the biggest operator in Europe, has voiced concern about the possibility of government restrictions, warning this could hold up the rollout of 5G services. Asked about contingency plans, a spokesperson pointed out that Deutsche Telekom maintains relationships with several equipment vendors.

Meanwhile, in the UK, BT Group plc (NYSE: BT; London: BTA) was this week revealed to have begun stripping Huawei equipment out of its mobile core and optical transport networks. It will not consider using Huawei as a supplier of 5G core or mobile edge computing equipment, said a BT spokesperson. (See Huawei Cut Out of BT's Mobile Core, Optical & Edge Plans and Europe's Telcos Fret as Walls Close In On Huawei.)

So there now seems little doubt that Huawei will lose mobile market share as operators turn to other suppliers in the 5G era. As Ericsson faces up to angry customers after this week's network problems, Nokia would seem to be in the perfect marketing spot.

The arrest of Huawei's Meng Wanzhou, reportedly because of an alleged breach of sanctions against Iran, marks a dramatic escalation of the whole affair that has probably been welcomed by investors in the Nordic equipment makers. With Europe's markets in recovery after a slump yesterday, Nokia's share price was up around 3.5% in Helsinki during early afternoon trading on Friday. Despite its network slip-up, Ericsson's had risen the same amount in Stockholm. Both companies are likely to benefit from a clampdown on the Chinese. (See Huawei: The Signs Were There and China Slams Huawei CFO's Arrest, Huawei 'Not Aware of Any Wrongdoing'.)

Indeed, Ericsson's pain will probably be relatively short-lived. Operators affected by the network outage might seek compensation from the Swedish vendor but seem highly unlikely to change suppliers in response. However reluctantly, most customers of ZTE Corp. (Shenzhen: 000063; Hong Kong: 0763) appear to have stuck by the Chinese vendor (for the time being) despite the far worse disruption triggered by US moves against it. Much like Huawei, ZTE was accused of breaching sanctions against Iran by including US components in equipment it sold to Iranian organizations. Its difficulties began in 2016, when it was officially charged with violations. (See Ericsson Problem Leaves Millions Without Smartphone Services and Amid the rubble of L'Aquila, ZTE tries to rebuild.)

For Ericsson and Nokia, the big risk is that China retaliates by shutting them out of its own 5G market. But China's hand is comparatively weak. Together, Ericsson and Nokia are understood to account for only about one quarter of the Chinese telecom infrastructure market. Last year, about 11% of Nokia's sales came from China, while 12% of Ericsson's were made in North East Asia. Huawei, by contrast, generates nearly half of its revenues outside China. Even if they are locked out of China, Ericsson and Nokia might be able to grow by replacing Huawei in Asian, European and some North American networks. Nor would it suit the interests of China's telecom operators to lose all Western vendors and the competition they bring.

Amid some investor skepticism, Suri has continued to guide for a major improvement in Nokia's performance starting in the final quarter of the year. There were some positive signs in the recent third quarter, when sales ticked up organically, compared with the year-earlier period, and the operating margin at the networks business improved sequentially. But a wave of problems for Nokia's number-one nemesis may carry the Finnish company into next year on a Christmas high.