Nokia chief Rajeev Suri peers down from his London office at a giant outdoor screen showing this year's Cricket World Cup. The sport he so clearly loves is analogous to his own industry, with its specialists and all-rounders, its complicated rules and susceptibility to external forces. Rain has been interrupting play, making the cricket results harder to predict. Amid some 5G turbulence and a trade war between the US and China, the same uncertainty affects today's market for telecom equipment.

The going has seemed especially rough for the Finnish manufacturer. Reaching a 12-month high of 5.74 ($6.44) in late January, its share price has since fallen about 22% after a weak set of first-quarter results and signs of 5G trouble. On a mission to grab market share, as customers shift from one generation of mobile technology to the next, close rival Ericsson is up 15% over the same period. Investors worry that Nokia is -- to use a cricket expression -- on the back foot.

Each Nordic firm claims to have secured 5G-related business at its rival's expense. Ericsson boasts radio deals in the UK and Germany where it is replacing Nokia. Its Finnish rival had not been able to launch a single 5G network in Europe or the US, Ericsson said earlier this month, because of software problems. While Nokia admitted software was not ready in the first quarter, blaming this for some revenue disappointment, it insists that interoperability remains an issue for the whole industry. When operators change mobile supplier, it is beating Ericsson, boasts Suri. "With our Nordic rival, when there are swaps we win two-thirds of the time," he says.

Analysts are skeptical a shake-up is already happening. During the initial phase of 5G rollout, equipment will rely heavily on the existing 4G network and so any "footprint" changes will be minimal, according to Stefan Pongratz, a senior director with market research firm Dell'Oro. In the long run, the question may be whether Ericsson's decision to focus on the radio access network (RAN), and jettison other lines of business, will be more successful than Nokia's contrasting move to bulk up -- through its 15.6 billion ($17.5 billion, at today's exchange rate) takeover of Alcatel-Lucent in 2016 -- and become a one-stop shop.

In cricket terms, Ericsson seems a bit like Shane Warne, a flamboyant Australian bowling specialist, while Nokia is perhaps more akin to Ian Botham, an Englishman who looked proficient with bat or ball in hand. It is a comparison Suri might not like, implying Nokia trails Ericsson in the RAN stakes. But he is adamant that specialism would not have been a winning play for his business in the 5G era. "We don't think having a narrow portfolio will play out in 5G in the long term," he says.

Specialist or All Rounder?

That is partly down to what Suri calls "strategic mindshare" with customers, and the ability to speak "authoritatively" about the impact one part of the network has on other domains. Equipped with this understanding, Nokia has been able to "optimize" products for a better user experience in a way a specialist never could, he insists. "Your chances in a routing tender are higher compared with Juniper because you have this strategic mindshare and can optimize the total cost of ownership with the customer," he says.

Championing all-in-one deals over the pick-and-mix approach may seem counter-intuitive. At trade shows, operators increasingly grumble about overdependence on one or two giant vendors. The push for greater interoperability and standardization is driven partly by a desire to introduce other suppliers. Almost without exception, vendors tout the "openness" of their technologies while operators harbor doubts about the reality.

Yet Nokia cannot reasonably face accusations of being more resistant than its chief rivals to this telco pressure. Unlike Ericsson and Huawei, it is a member of the Telecom Infra Project, a Facebook-led initiative offering support to network startups. It is also a long-time member of the group that preceded the O-RAN Alliance, an industry association trying to bring more competition into the RAN. Ericsson did not join that group until earlier this year, while Huawei remains firmly on the outside, arguing its dedicated equipment is far superior to any "white box" network built by a multitude of vendors.

Even as Nokia demonstrates its support for that multivendor network, data shared by Suri handily suggests the all-in-one strategy is paying off. "A year ago, we had 35% of our pipeline that was end-to-end and now it is 49%," he tells Light Reading. "It is steadily growing." He also partly credits the end-to-end strategy for an improvement of three percentage points last year in Nokia's share of the market for optical network equipment. In the last few weeks alone, Nokia has won a deal with a large European operator to replace Huawei in the transport network, says a company spokesperson.

Enterprising moves
For investors, another potential concern is Nokia's enterprise strategy. Worried about competing against its main telco clients, Ericsson has stopped selling directly to enterprise customers. Nokia seems to have no such compunction. Today, it boasts about 1,000 enterprise customers across the energy, logistics, manufacturing, public sector, transportation and "web-scale" sectors. The number is rising by 150-200 annually, according to Suri, and Nokia is targeting an addressable market of about 4,000 such organizations.

The danger this could backfire and upset Nokia's service provider customers may have risen after Germany's telecom regulator decided to reserve valuable 5G spectrum for local use by industry. Yet sales to enterprise customers grew 9% last year, offsetting weakness elsewhere, and today they account for about 5% of Nokia's 22.6 billion ($25.4 billion) in annual sales. Some 12 or 13 countries are considering similar moves to Germany, according to Suri, and the rollout of private LTE networks to enterprise organizations appears to be one of the fastest-growing parts of Nokia's business. Ignoring enterprise opportunities could be self-defeating.

5G Is Not Just Radio 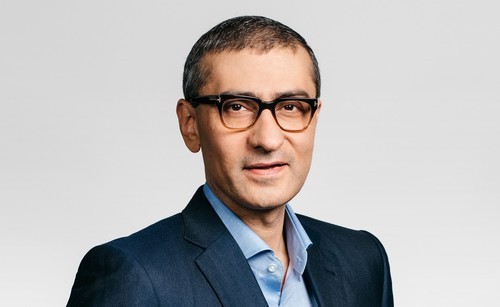 "Over the next eight or nine years there will be a lot of spectrum needed and some enterprises are lobbying for that," says Suri, when quizzed about the strategic risks. "Our preference is to work through service providers and where they have no interest we go direct  We are not competing for a moment with our customers."

The direct-to-enterprise strategy also gives Nokia a different way to amortize research-and-development spending. "We try to do enterprise with minimal investment because we are making those products for the operator space," says Suri. "We might as well amortize over a new channel and diversify." Last year, the company's overall R&D spending of about 4 billion ($4.5 billion) was roughly comparable to Ericsson's investments, despite Nokia's much broader product portfolio. But Suri vehemently denies that Nokia is too thinly spread. "We have a better mix of low-cost countries after looking at where talent is available," he says. "It has helped to not have everything in Finland but use Poland, Greece and other parts of Europe."

Cost reduction remains a priority. A program to slash annual operating costs by 1.2 billion ($1.4 billion) was announced in the wake of the Alcatel-Lucent merger. Now that integration is largely done, Suri is determined to find another 700 million ($785 million) in yearly savings from cuts to corporate, support and IT functions, as well as real estate. "After that we should be at the optimum size," he says. What this means in terms of headcount he will not say, but Nokia had an average of 103,083 employees last year, up from 101,731 in 2017, and is less efficient than its Swedish rival in terms of revenues per employee. At current exchange rates, Nokia makes about $239,000 per worker annually, while Ericsson generates more than $245,000.

The figure might grow dramatically if licensing becomes a much bigger deal in the 5G era, as Suri hopes it will. As one of the big owners of the "standard-essential" patents behind cellular technology, Nokia theoretically makes money every time someone buys a smartphone that includes its intellectual property. Last year, it generated about 1.4 billion ($1.6 billion) in patent as well as brand licensing. But the opportunity could be far greater in future if 5G is eventually used in billions of connected devices, and not just smartphones. Smart metering, connected cars, consumer electronics and industrial IoT (the Internet of Things) are all potential targets, according to Suri. And he is confident the lofty profit margins are sustainable. "It has an 82% to 83% operating margin attached to it and we see 85% in the long term," he says.

At the mainstream 5G network business, investors continue to weigh the impact of US moves against Huawei. If the controversial Chinese vendor is hammered by trade restrictions and locked out of 5G markets, Ericsson and Nokia could be the main beneficiaries. Yet neither has seen a boost so far, and Western vendors may be worried about supply chain fragmentation and an aggressive Chinese response to the US campaign. "It is too early to tell," says Suri, when asked if Huawei's misfortunes spell opportunity for Nokia. Just like cricket, the jostling for position in the telecom industry can be a very long game.

roch.smartcric15 6/24/2019 | 11:04:22 PM
Re: Cricket crictime.com smartcric star sports live tv Nokia has subsequently been in touch to point out that five operators have now launched 5G services on its equipment. Those companies include three in South Korea, one in the Middle East and one in Italy, which announced its launch around the time Bansal made his comments. The full story about those five operator launches can be seen,,
Reply | Post Message | MESSAGES LIST | START A BOARD

Outside the subcontinent, down under, S. Africa, and England most readers probably won't get the reference. Suffice to say, cricket is a tiny bit like baseball in that it involves a lot of standing around in the outfield not doing much.

Nokia has subsequently been in touch to point out that five operators have now launched 5G services on its equipment. Those companies include three in South Korea, one in the Middle East and one in Italy, which announced its launch around the time Bansal made his comments. The full story about those five operator launches can be found here: