Millimeter Wave Spectrum Auction Blasts Past $1.5B, Shows No Signs of Cooling

The FCC's ongoing auction of millimeter-wave (mmWave) spectrum this week shot past the $1.5 billion-mark in terms of total bids placed, and the pace of action in the event hasn't slowed down since it started on Monday. The spectrum will likely be put to use in 5G networks.

According to spectrum expert Stephen Wilkus of Spectrum Financial Partners, bidders in the FCC's latest spectrum auction have been increasing their bids by 10% to 20% during each of the last nine rounds of bidding. He said that the event, which started Monday, has already exceeded his expectations and appears to be headed toward $3 billion in total bids.

However, analyst Tim Farrar with TMF Associates noted that the auction would have to generate between $7 billion and $8 billion in total bids to reach the same valuations as the FCC's two prior mmWave spectrum auctions.

The FCC's Auction 101 for 28GHz spectrum licenses raised $703 million in total bids, while its Auction 102 for 24GHz licenses raised $2 billion in bids. The FCC disclosed the results of those auctions this summer. The agency's Auction 103, which started Monday, offers an astounding 3,400MHz of spectrum across the 37GHz, 39GHz and 47GHz bands -- that's far more overall spectrum than was available in the agency's two prior mmWave auctions.

With more spectrum coming to market, the overall demand for the mmWave spectrum is declining. (The FCC just this week took steps to release even more spectrum for commercial uses.)

Wilkus of Spectrum Financial Partners said that the average price for spectrum licenses in the FCC's ongoing Auction 103 clocked in at just $0.00187 per MHz/POP in round eight, which he said was five times lower than the final price of the 24GHz spectrum auction earlier this year.

At issue is the way the value of spectrum is calculated. "MHz/POP" refers to the amount of spectrum available in a license across how many people it covers. For lowband spectrum like 600MHz, those calculations often sit in the $1 range since 600MHz transmissions can travel across miles of geography, and operators generally buy licenses in the band in blocks of 10MHz. Calculations for mmWave spectrum are much different though, considering transmissions in such spectrum can't travel more than a few thousand feet, and operators often buy such spectrum in 100MHz chunks. That's why the FCC's first two mmWave spectrum auctions ended at just $0.01 per MHz-POP.

"Results after the first round of bidding in the FCC's Auction 103 appear to indicate that the federal coffers may end up lighter than expected," wrote Spectrum Consortium COO Sasha Javid on LinkedIn after the first day of bidding in Auction 103. Javid manages some of the spectrum holdings of some TV broadcasters. "Round 1 ended with gross proceeds totaling $637,295,800. While this is more than the approximately $284 million raised after Round 1 of Auction 102 (the 24 GHz auction), it is approximately 40% less on a MHz-POP basis. After Round 1, spectrum is selling for just $0.000931 per MHz-POP, compared to $0.001606 per MHz-POP at the same point in Auction 102. With 3400 MHz of spectrum available and just 35 bidders competing, it will be a struggle for Auction 103 to reach anywhere near the disappointing $0.009112 per MHz-POP that Auction 102 reached after 91 rounds." 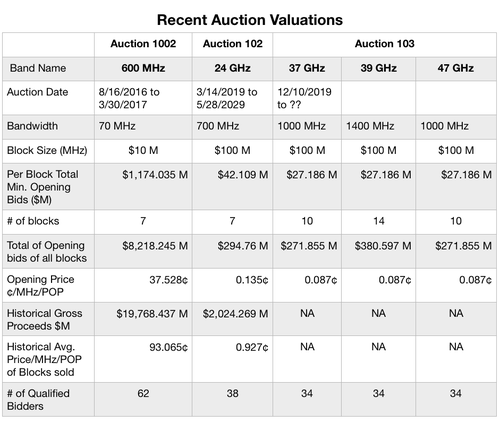 Further, according to Wilkus's calculations, the overall value of spectrum appears to follow a clear trajectory based on whether it is low-band spectrum or high-band spectrum. For example, he said demand for 47GHz licenses in Auction 103 significantly trails demand for the 37GHz and 39GHz licenses. 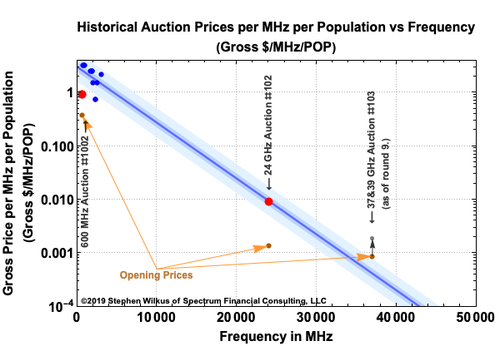 One final takeaway from the FCC's ongoing Auction 103 is that demand varies by location. While the FCC isn't disclosing the identity of the bidders, it does disclose the specific licenses that are receiving bids. Because the FCC divides up spectrum licenses by geographic location, the event can show where Auction 103 bidders are fighting over mmWave spectrum licenses. 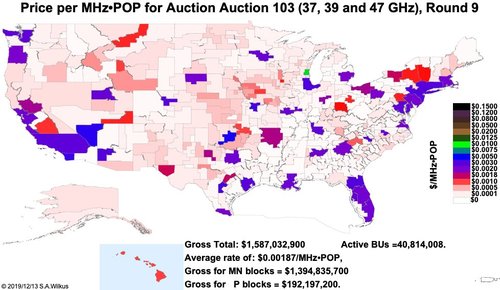 Not surprisingly, much of the demand for spectrum is centered around major metro areas, while there's not much demand for licenses in rural areas. Further, as Wilkus noted, there are no bids at all yet for licenses in Puerto Rico, the US Virgin Islands, American Samoa and the Gulf of Mexico.

The FCC will reveal the identity of Auction 103 bidders after the event is over. AT&T, T-Mobile and Verizon purchased the bulk of the licenses up for grabs in the FCC's two prior mmWave auctions.

JohnThomas151 12/16/2019 | 7:11:36 AM
Best Article The article you have shared here very good. This is really interesting information for me. Thanks for sharing!