This is a story about how I met my small cell. Or at least, how I'm getting ready to meet it (it should be installed in a few months). It's going to be roughly a mile from my house in Arvada, a suburb of Denver, Colorado.

At least, that's the closest one to me right now. I expect someone in the next few years will build an even closer one.

This is important because, if you live in any urban or suburban area of the US, you're probably going to meet a local small cell, too.

If you don't have one already.

A major new trend
By most indications, small cells are the future of cellular and 5G: Those big, 100-foot tall macro cell towers that loom outside of town can't cut it anymore. They can't keep up with the growth in traffic across 3G, 4G, and 5G networks, and they're too tall and spread out to use for transmissions in higher spectrum bands like the millimeter wave (mmWave) bands that Verizon, AT&T and T-Mobile are in part using for 5G. (mmWave signals can only travel a few thousand feet.)

Network operators around the world are looking to "densify" their networks with small cells, which are essentially pizza box-size transmitters installed on top of light poles, rooftops and other so-called "street furniture." Ultimately, the US wireless industry is expected to install almost a million small cells around the country in the years to come -- trade group CTIA forecasts that the number of small cells in the US will grow from around 86,000 in 2018 to over 800,000 by 2026.

Of course, this isn't going to be easy. Small cell vendors will need to get municipal permission to install them. They'll need to route power to them. And they'll need to figure out some way -- fiber, microwave or something else -- to connect them to the wired Internet. And then they'll need to make money from all this, too.

It's a challenge that companies like Zayo, Verizon, Crown Castle and ExteNet Systems are embracing in a big way in virtually every US city.

Because I've been writing about this topic for almost a decade now, and because the small cell push took off in earnest last year, I decided it was time to meet my small cell. And thus, I began my search for the small cell that's physically closest to where I live.

A fortuitous connection
To find my small cell, I had planned to connect with the city of Denver first, given that it already has a large and growing network of small cells. Although downtown Denver is roughly ten miles from my house -- not very close when it comes to small cells -- I figured that was the place to start.

And then I lucked out; the answer to my small cell quest literally landed in my lap. The city of Arvada produces a weekly newsletter, and right there on page three was everything I needed:

"Small cell facilities are arriving in Arvada," read the blurb. "Small cells are installed and operated by private providers, including Verizon, AT&T and Zayo, on behalf of Sprint, to continually improve and expand their network capacity and coverage. Legally, the City of Arvada cannot restrict the installation of the small cell sites; it is required by federal and state law."

It also included a phone number and website for details.

After a bit of footwork that included carefully explaining the fact that I'm a legitimate journalist working on a legitimate story about small cells, I got in touch with Linda Hoover, a senior planner in the City of Arvada.

Hoover explained that Arvada just finished a two-year process to get ready for the small cell wave. Cities around the country are being inundated with small cell applications, and the municipal issues surrounding small cells are much different than the issues around 100-foot-tall macro towers. Arvada's small cell efforts included the creation of a small cell section inside the city's eTRAKiT permitting system, as well as the development of an organizational structure that could handle dozens or even hundreds of small cell permits. Hoover said four people must approve each small cell permit in Arvada: an engineering and traffic person, a permitting clerk, a permit administrator, and someone like Hoover in the city's planning department.

In order to submit a small cell application, a company like Verizon must first sign a master lease agreement with the city. The company must then pay a $300 planning review fee for the small cell site, plus whatever extra electrical and traffic fees apply to that specific small cell's installation (total city fees on my small cell are $1,336.54).

The reason for all this red tape ought to be clear to anyone even remotely familiar with local zoning and permitting rules in the US. It's important for cities to tightly control who can do what with public infrastructure. I've been to countries where there is little or no oversight on these kinds of issues, and it's not pretty: 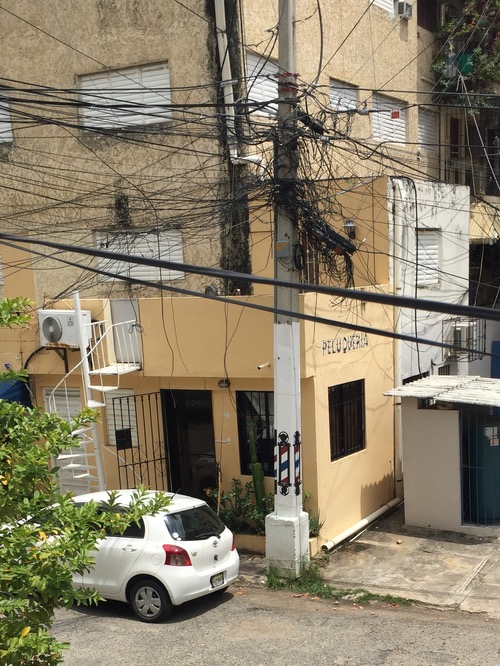 Rights of way in the Dominican Republic.
(Source: Mike Dano)

A municipal minefield
Thankfully, it sounds to me like Hoover and the city of Arvada are aware of the sticky issues surrounding small cells in the US. In its note to residents, the city nods to new FCC rules approved in 2018 that essentially forbid cities from blocking or charging excessive fees for the installation of small cells. Hoover explained that Arvada's small cell fees are designed to recoup the cost of the permitting process, but not to make extra revenues. That's a change from how Arvada handles macro cell tower applications, which are designed to add to the city's revenues.

Thus, it should come as no surprise that the FCC's new small cell rules haven't gone down well with other cities like Eugene, Oregon, and Huntsville, Alabama, which are among a group of localities suing to block the FCC's small cell guidelines.

The city of Arvada is also aware of concerns around the country about the health effects of small cells and 5G in general. "STOP KILLING THE CHILDREN!!!" wrote one cell tower opponent in a Washington state town considering a cell tower next to an elementary school.

"If you would like to learn more about the safety of the [small cell] facilities, visit FCC-Safety," the city of Arvada notes on its website.

And Arvada also has clear guidelines designed to prevent small cell vendors from installing unsightly equipment. "All Small Cell Facilities shall, to the extent possible, match the appearance and design of existing City traffic signal or City or utility street light or distribution pole adjacent to the Wireless Site," the city states in its guidelines. That's likely intended to forestall embarrassing stories like this one from Aurora, another Denver suburb, that trumpeted "mysterious" computer boxes showing up in residents' yards that were actually for small cells.

Hoover said that the city is preparing to approve its first dozen small cell permits, including mine, and that it ought to be able to move much more quickly on future applications now that the system is in place. That's probably a good thing considering companies like Verizon, ExteNet and Crown Castle have started filing lawsuits against cities like Torrance, California, that they believe are dragging their feet when it comes to prompt action on small cell installation applications.