Making the Case for 5G

MWC Los Angeles -- 5G is in its early days and facing an increasing barrage of criticism, but it's rolling out fast and much sought-after business models are emerging -- including a few pleasant surprises.

"For an industry that often describes itself as slow moving, this is phenomenal," Brown said.

In the US, Sprint is early to market with 5G, and the provider is already seeing early use cases and trends, Bryan Fries, Sprint VP 5G strategy and global services, said. But even though 5G is new, Fries said he's been living with 5G a long time.

"I've spent nearly every moment of my life thinking about 5G for the past few years," he said.

Kicking off his talk about business potential for 5G, Fries said, "I'm not going to spend a lot of time talking about remote surgery."

Find out what you need to know about the telco network revolution at Light Reading's 5G content channel.

Remote surgery is front-and-center in telco and vendor marketing presentations about the future of 5G, along with mass-market virtual reality and self-driving cars. What these use cases have in common is they don't exist -- they're entirely speculative.

Meanwhile, in the real world, media delivery is emerging as a 5G use case. Media traffic comprises some 70% or more of network traffic, and 5G lets users access media in a fraction of the time it takes using 4G/LTE, Fries noted.

"When you make things better and easier for people, they'll use more of it," Fries said. And, indeed, Sprint is already seeing higher levels of engagement with data services over 5G, though Fries acknowledged that at least part of that would be due to today's 5G early adopters being likely to use more bandwidth anyway, simply by virtue of being "power users."

Sprint partnered with streaming mobile gaming platform Hatch in a recent 5G project. Gaming is a big opportunity for 5G; more than half of the US population plays a mobile game at least once per month, providing an early opportunity to highlight 5G opportunities, Fries said. 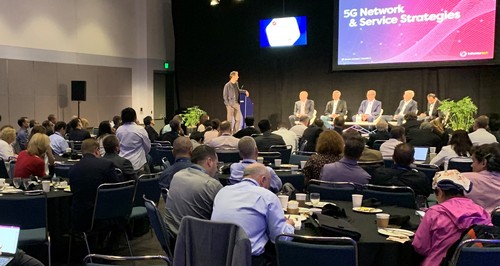 Light Reading's 5G breakfast event was, of course, well attended and not just because of the copious lashings of fresh fruit on offer...

The gameplay was awesome Soon after lighting up 5G in Los Angeles, Sprint hosted the first amateur esports tournament over 5G in a full night of gameplay. For example, four people competed on Hatch on a beach buggy racing game, followed by a bout of Fortnite, all done using high-end gaming PCs hooked up to 5G connections, Fries said.

"The gameplay was awesome. The energy was high. People had a fantastic night," Fries said, noting this wasn't a telecom industry event -- the people involved were part of the gaming community.

The event was held in partnership with Hatch, Nokia (Sprint's radio access network provider) and Super League Gaming. Partnership is key to delivering 5G benefits, Fries said -- operators won't be able to do it alone.

Gambling is another promising use case for 5G, Boingo Wireless CEO Mike Finley said. More precisely, "micro-betting." Using the low-latency capabilities of 5G networks, consumers will be able to make almost instantaneous bets on individual events in games, such as whether a basketball player makes a particular shot.

Shifting to a focus on enterprise opportunities, Alejandro Holcman, Qualcomm SVP corporate engineering, said the company is bullish on the possibilities of millimeter wave 5G, which works well indoors, in locations such as warehouses, factories and other commercial buildings with a need for the kind of wireless networking 5G can provide.

Enterprise applications are often cited as the first, best use case for 5G, but those will be challenging to implement, Ericsson CTO Erik Ekudden said. The technology is there, but it requires enterprises to make big changes, finding engagement for deployments that will play out over multiple years.

Nonetheless, enterprises have strong interest in 5G as a network platform. They want the guaranteed, predictable performance in a wireless network that 5G promises, Ekudden said.

Different industries and regions are finding their own unique needs for 5G, Qualcomm's Holcman noted. 5G looks set to replace WiFi in some industries, while regulators in countries such as Germany have set aside 5G spectrum fro allocation to enterprises that want to build their own 5G networks.

The platform as a platform Ekudden made the case for Ericsson as a 5G technology provider to telcos and enterprises. Openness, he said, is important, but it requires a guiding architecture. Organizations are "caught in a web of system integration work that costs them more and more," he said. And that's why organizations are coming to Ericsson. They want to consume "the platform as a platform, and not as bespoke pieces," the Ericsson man said.

On the consumer side, 5G is going very well, Ekudden said. If you interview random consumers, many are not just expecting 5G, they're "expecting it to be a step change," he said. About two thirds are willing to pay more for performance, he suggested: "They are longing for that higher bitrate and low latency they have been promised," Ekudden said.

Where is 5G most prevalent? An early start in North America paved the way for aggressive buildout plans, Ekudden said. Northeast Asia, particularly South Korea, saw massive buildout at the same time, with 3 million customers and nearly universal coverage, albeit in a smaller country. That penetration will pave the way for new user experiences such as AR/VR. Japan and China are strong on planned buildouts, the Ericsson CTO said.

Worldwide, 1.9 billion subscribers are expected to be using 5G services within five years, and penetration is already underway in every part of the world, including pockets of development in the Middle East and parts of Africa, Ekudden said.

With 5G in its infancy, some early services have attracted criticism for poor performance, but according to Ekudden, reality exceeds expectations. "One of the things that surprises people is that it works so well," he said. Using tools such as midband spectrum, dynamic spectrum sharing and carrier aggregation, operators can solve for noticeable problems. "You start with the current grid and upgrade it and deploy more densities when you need it," the Ericsson executive said.

But Boingo's Finley disagreed. He said consumers initially had different experiences on different networks when both 3G and 4G rolled out, and that might happen again with 5G at first, but operators will move quickly to resolve it, as they did with 3G and 4G.

Finley said the best applications for 5G have yet to come; apps like Uber, Airbnb and the current iteration of Netflix only came out after 4G had been deployed.

Fast connections alone will be a valuable use case for 5G, Finley said. He cited the example of someone at an airport rushing to board a plane; in that situation, the difference between a one-minute download on 5G versus eight to ten minutes on an LTE network can be a big deal.

If the main revenue source would be media over eMBB and if carriers have hopes for charging more for 5G eMBB consumer services there are on the way for a rude awakening!