If every journey begins with one step, the 5G journey in the US appears to be starting with a bit of a waddle.

According to BayStreet Research, US wireless network operators sold just 29,000 5G devices by the end of the second quarter. And the firm predicts that the number won't grow much throughout 2019.

5G is definitely in its infancy in the US. It only launched a few months ago, and it's only available in a handful of cities on just a few phones. And those phones aren't cheap: The Samsung Galaxy S10 5G for Verizon starts at an eye-watering $1,300, for example.

Thus, it's probably no surprise that the first 5G phones aren't exactly flying off the shelves. 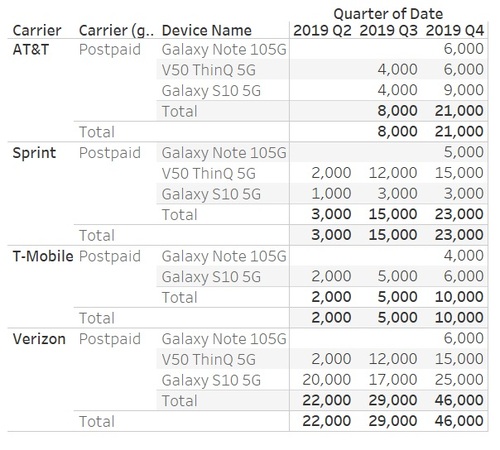 Unlisted in the above chart is the 5G Moto Mod, an accessory that customers can snap on to a handful of existing Motorola smartphones that will allow them to access Verizon's 5G network. Maldonado estimated just 1,000 to 2,000 sales of that gadget.

BayStreet obtains its figures from public and private data sources. Maldonado pointed out that the company's third and fourth quarter figures are estimates. He also noted that the forecasts of 5G phone sales in the coming quarters don't -- and can't -- include as-yet-unannounced devices.

What this means
If the US is in a race with South Korea in 5G, it appears that South Korea has gained a definitive lead. The country now counts more than 1 million 5G customers across the operators that offer 5G in the country. However, South Korea's 5G is widely available in many major cities and is offered by all three of the country's main providers.

And US operators are promising 5G improvements throughout this year and next year. Executives from T-Mobile and Verizon have promised to sell less expensive 5G phones, and T-Mobile and AT&T are both promising to launch nationwide 5G coverage early next year.

Further, many in the industry have argued that the rollout of 5G in the US could ultimately take up to ten years, considering operators will need to deploy 5G across more potentially millions more small cells, using a wide range of spectrum bands and will have to invest in technologies like mobile edge computing. But those technologies could support a wide range of new services like real-time virtual reality and autonomous vehicles.

For those reasons, many in the industry remain upbeat about the overall prospects of 5G in the US. But here in the early days of 5G, most actual customers are staying on the sidelines.

[email protected] 9/6/2019 | 2:11:09 PM
BayStreet Numbers/Table Hello Mike, an interesting article that helps illustrate the infancy of 5G in the U.S.

ajwdct 8/19/2019 | 7:27:36 PM
Limited mobility of 5G smartphones/devices; Sticker Shock Pricing! It's extremely important to realize that a given 5G smartphone will only work on one carrier's network, e.g. an AT&T 5G phone won't work on Verizon's 5G network.  That's because each pre-standard 5G wireless carrier uses different RIT specs (most are based on 3GPP Rel 15 NR NSA for the data plane with LTE signaling for the control plane and EPC for the mobile packet core) and different frequencies.  So your so called 5G phone will fall back to 4G if you are not in range of your carrier's pre-standard 5G network.  That means limited mobility and certainly none when you travel to a city where your carrier doesn't have 5G coverage.

All these pre-standard 5G deployments will be trashed and ditched when the IMT 2020 standard is completed and implemented in new standard IMT 2020 phones and base stations/small cells.

Meanwhile, IHS-Markit reports that the cost of the initial wave of 5G phones is dramatically exceeding expectations, with the price premium as much as 29 times higher than many consumers anticipate, according to a new IHS Markit survey examining consumer perceptions regarding the technology.

The actual pricing of the first wave of 5G phones is far higher than expected.  For example, Samsung's S10 5G phone is retail priced at $1,300, a 335 percent premium compared to the $388 average for the company's existing 4G smartphone models. In dollar terms, this would represent a $912 increase in price, an order of magnitude higher than consumers' expectations.

This pricing discrepancy could instill sticker shock among many consumers. While such pricing premium is not likely to impact early adopters, it could slow sales of 5G devices to the wider, more mainstream consumer market.