Intel Doubles Down on 5G & NFV

Network and edge "cloudification" are major drivers for the new products, as well as cloud, AI and analytics, said Navin Shenoy, Intel executive vice president and general manager for the Data Center Group.

"The same concepts and technologies that created the cloud are now transforming the network. And as 5G emerges, we will only see that cloudification accelerate," Shenoy said. 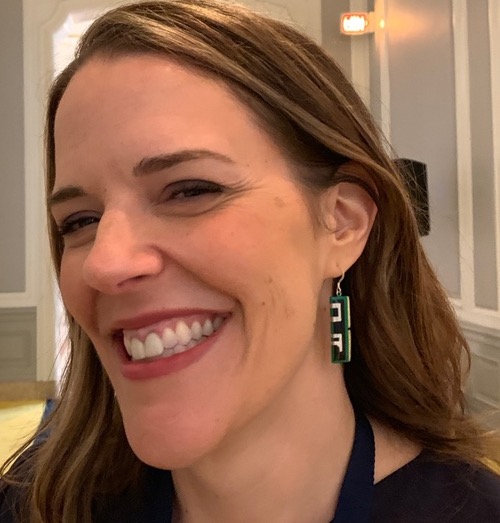 Intel's Lisa Spelman sports Optane earrings, reproductions of the Intel memory product, made by a local crafter in Portland, Ore.

The new processors include configurations optimized for networking and NFV, with 1.76x performance improvement for NFV over previous processors, as well as enhanced quality of service.

Matt Beal, Vodafone director of technology strategy and architecture, spoke at the event on a pre-recorded video. He said the telco is moving to the cloud with x86 processors. "Network workload has always been the hardest thing to inject in a general purpose processor," he said. The new Intel technology brings a higher degree of automation and reliability to Vodafone's infrastructure, as well as enhancing Vodafone's ability to scale to provide an exact fit for customer's needs at the moment, he added. (See Vodafone Meets IBM: 5G Dream Team or Culture Clash?.)

Don't forget memory
High-speed memory is a requirement for network performance, because the CPU needs to get data fast enough to operate, Shenoy said. To that end, Intel introduced Optane D Persistent Memory, with up to 36 TB in an eight-socket system.

Matt Singer, a senior staff hardware engineer at Twitter, took to the stage (in physical form) to talk about how the company uses Intel memory and storage to improve performance. Twitter processes more than a trillion events daily as users tweet and interact with other's tweets. That activity is processed by Hadoop, with 100 petabytes of logical data in a cluster, using hard drives for storage. Hard drives are affordable, Singer explained.

Twitter is able to reduce the number of racks in a cluster, which reduces the size of the data center footprint, consolidating 12 smaller hard drives to one big hard drive in a system without reducing performance, and moving from four-core to 24-core Xeon processors, Singer said.

Twitter claims a 75% reduction in energy usage, and 30% overall reduced total cost of ownership, due to these architecture changes, Singer said. And Twitter can make better use of processors because memory bottlenecks are removed.

Next page: Life on the edge