In Search of 5G's Rationale

The race is on to build the first commercial 5G networks, but beyond providing ever faster mobile broadband connectivity, what type of applications and services will enable network operators to develop new revenue streams using their shiny new networks?

That's the question being addressed by a Spanish research lab called 5TONIC that was founded more than two years ago by Telefónica and not-for-profit research organization IMDEA Networks Institute, and which now includes the likes of CommScope, Ericsson, Intel and Red Hat amongst its members.

The focus of the initiative, which is funded by its members but which could access EU funds for specific projects, is to identify useful applications for specific verticals, not to engage in yet more R&D on the underlying technology, notes Patrick Lopez, VP of networks innovation at Telefónica and a member of the 5TONIC steering board.

"We are identifying specific needs within verticals that are unresolved with current technology -- the big issue is that there's a lack of understanding among enterprises about what 5G could do for them," Lopez told Light Reading during the recent 5G World Summit in London. "Telecoms people tend to talk about the technology  it takes time to translate the opportunities created by the technology into benefits for users" and then be able to communicate that to those users. "We need to understand what kind of workaround companies are using today to achieve what they need to be done," and see how 5G could help make that more efficient and better.

Basically, then, 5TONIC is searching for 5G's raison d'être -- the use cases that will turn 5G into more than just 4G on steroids. (See 5G Still More Like Rocket Fuel Than a Mission to Mars.)

So what has 5TONIC done so far? It currently has three use cases: The first was focused on the use of augmented and virtual reality at tourism trade shows, which are big business in Spain; and the second was focused on providing device-to-device data communications between wearable technology -- will the 5G T-shirt be the next big industry giveaway? -- and healthcare workers.

Now 5TONIC has teamed up with ASTI Mobile Robotics to investigate how 5G systems could be used to manage and drive load-bearing autonomously guided vehicles (AGVs) around industrial settings in a more efficient way. In addition to goods they are carrying (up to several tons), AGVs currently incorporate a significant volume of compute equipment, including microcontrollers: 5TONIC and ASTI will look at how much of that IT could be centralized and the microcontroller tech virtualized, reducing the cost of the AGVs and improving the centralized management of the driverless vehicles as they follow their instructions about where they need to go next. (See this 5TONIC announcement for more details.)

Lopez says the early trials with ASTI, which involve technology from Ericsson, CommScope and edge computing specialist Saguna Networks , do not currently use a pure 5G topology -- the radio technology is still LTE, for example. As a result, the latency between the centralized compute assets and the AGVs is currently about 25 milliseconds, but that will reduce once a 5G radio technology is available and swapped in, he explains.

That shift to a full 5G set-up will likely come later this year, when ASTI plans to build on the early tests and set up a proof of concept in one of its own commercial factories, while any moves to take the concept to an external third party would not happen until some time in 2019. 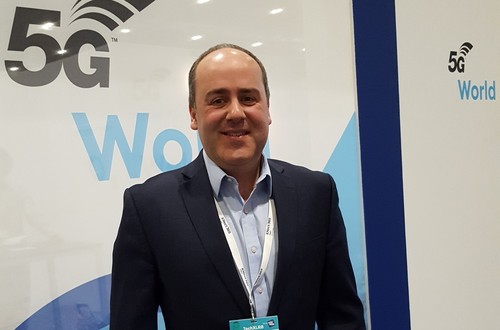 Telefónica's Patrick Lopez: 5TONIC is identifying specific needs within verticals that are unresolved with current technology.

Evaluating such use cases, then, clearly takes time a lot of time. Lopez notes that each potential use case "has a significant incubation period" while the various parties involved analyze what is currently being achieved, what end users want, how the introduction of 5G could benefit enterprises and then how trials and tests could benefit all involved. Further trials are being considered but Lopez says 5TONIC isn't ready to discuss any details just yet.

In the meantime, Telefónica is engaging separately with ASTI Mobile Robotics to develop IoT products based around 4G capabilities and to jointly develop business opportunities in multiple verticals based on automated industrial processes in the European and Latin American markets where the Spanish operator giant is active. (See Telefónica, ASTI Mobile Robotics Team on Industrial IoT.)

Gabriel Brown 6/26/2018 | 6:57:53 AM
Re: Ante up, big boys The "emperor has no clothes" story refers to situation where nobody would call out the absurdity for fear of being be-headed. There's no shortage of critical thinking and opinion on 5G. Just read LR for a few weeks.

What does get away from us all a little bit is the timeline and phasing of 5G. Some of this  stuff will take longer, and be harder, than it first looked. That's no reason to give up.

OK, I sort of get that - spectrum is important.  But...you have to get ROI on that investment, and it's a brave, brave operator that builds out widescale 5G on the promise of the use cases that are commonly trotted out: connected cars, VR etc.

It feels somewhat chicken and egg: the real use cases come organically when the network exists, but who's going to build the network without a use case to finance it?

[email protected] 6/25/2018 | 5:42:59 AM
Re: Ante up, big boys Ultimately I can't see anything in the way of business opportunities for operators that don't implement 5G capabilities UNLESS no-one else on their market does... and that's a scenario I don't see happening elsewhere.

It will be very gradual though and it will be quite some time before anything resembling 5G hits many emerging markets -- across AFrica, for examole, where 4G rollout is still happening in many countries.

They key consideration here is not the radio access, I feel -- the major challenge is planning and deploying all the supporting technology, from optical capacity to virtualization to edge computing and (quantum computing-powered?) analytics that need to be in place to make anything beyond faster mobile broadband a commercial possibility. That, in my opinion, is all the realy hard stuff - but once that's there, then those operators that have it will have a massive cmpetitive advantage over those that don't... so any operators with plans to hold back or push LTE to its absolute limits are operating on borrowed time in my opinion.