Huawei Shrugs Off Challenges With Surge in H1 Profit

China's Huawei has maintained its sales growth and bolstered profitability despite fierce competition from chief rivals Ericsson and Nokia and rising hostility in parts of the Western world.

In a statement lacking detail, the Chinese vendor said overall revenues were up 15% year-on-year for the first six months of 2018, to 325.7 billion Chinese yuan ($47.7 billion). That rate of growth is the same as Huawei reported for the first half of 2017.

Unfortunately, Huawei Technologies Co. Ltd. does not provide a breakdown of results across its three separate business divisions of carrier, enterprise and consumer. Last year, when full-year results were up 16%, to RMB603.6 billion ($88.3 billion), the company was heavily reliant on its enterprise and consumer divisions for sales growth. Revenues at the carrier business, the part that competes directly against Ericsson AB (Nasdaq: ERIC) and Nokia Corp. (NYSE: NOK) in the market for telecom network equipment and services, edged up just 2.5%, to RMB297.8 billion ($43.6 billion).

Headline Performance in First Half 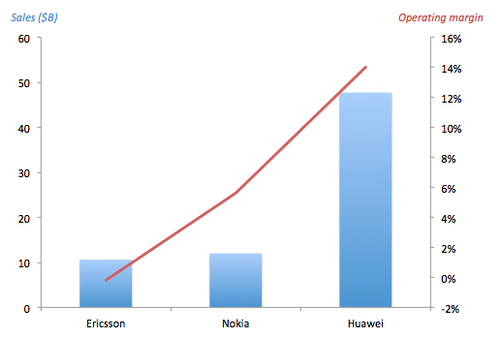 Source: Companies. Note: All currency conversions were carried out at today's rates.

Analysts familiar with Huawei say it has been just as concerned as Ericsson and Nokia in recent months about a slowdown in that carrier market, as major service providers cut spending on networks following the rollout of 4G technology and with 5G on the horizon.

However, both Ericsson and Nokia flagged improvements in the mobile network market for the second quarter, when each reported organic sales growth of about 2%. And in a sign that more adventurous operators are keen to start investing in 5G, Nokia this week landed a $3.5 billion contract with T-Mobile US Inc. for the rollout of 5G network products. (See Profits Crash at Nokia's Networks Biz, Ericsson Back in Profit After Fierce Cuts & 5G Action and Nokia Reels In $3.5B 5G Deal With T-Mobile US.)

Huawei cannot benefit from any spending uptick in the US market due to government hostility. Since 2012, the main US service providers have been warned off using either Huawei or smaller Chinese rival ZTE Corp. (Shenzhen: 000063; Hong Kong: 0763), with both seen as a potential threat to national security. Policymakers insist they are worried that Chinese network products could facilitate spying by the Chinese government.

With the recent US campaign against ZTE, penalized for selling US technology to Iran and North Korea, some market watchers fear Huawei is similarly in the crosshairs of US politicians. Earlier this year, it was reported to be under investigation by the US Department of Justice for breaching sanctions against Iran. At the very least, service providers seem less likely to use Chinese vendors as their sole suppliers from now on. (See ZTE Racks Up $790M Q1 Loss on US Ban.)

Huawei has also recently encountered a backlash in Australia, where politicians citing security concerns want it blocked from selling 5G products to local operators. In the UK, meanwhile, security watchdogs earlier this month said they could provide only "limited assurance" that risks posed by Huawei had been mitigated. UK service provider O2 was subsequently reported to have distanced itself from Huawei, saying it is less reliant on the Chinese vendor than rivals BT Group plc (NYSE: BT; London: BTA) and Vodafone Group plc (NYSE: VOD). (See Huawei Faces Security Backlash in Australia and Huawei Poses Security Threat, Says UK Watchdog.)

Growing competition is a further concern for Huawei. Ericsson, in particular, has been trying to grow market share in some countries in advance of 5G deployment, and is understood by Light Reading to have been very aggressive on pricing in some tenders. In June, a contract win for the Swedish vendor with Telefónica Argentina came partly at Huawei's expense. (See Ericsson Beefs Up With Telefónica Argentina as Huawei Goes Hungry.)

Even so, in most parts of Africa, Asia, Europe and South America, Huawei's position has appeared to remain strong. And while there was little mention of 5G in its earnings update, Huawei may also be anticipating a wave of 5G investment in key Asian and European markets in the next two or three quarters.

Providing his assessment of the 5G outlook outside North America during a recent earnings call with investors, Nokia CEO Rajeev Suri said: "There will be a couple of waves depending on the spectrum awarded. South Korea will happen later this year and then you will have Japan starting at some point in the first quarter of next year followed by China around the end of Q2 or in Q3 next year. Then you have some Middle Eastern and Nordic countries in the first half. These are the lead countries."

Besides maintaining its rate of sales growth, Huawei also recorded a sharp increase in profitability, with its operating margin up to 14% from 11% a year earlier. That means operating profits soared 46%, to around RMB45.6 billion ($6.7 billion).

Huawei is thought to have made cuts to marketing expenditure after rotating CEO Eric Xu complained about "empty and extravagant marketing events and conferences" during a New Year message in January 2017. Xu was evidently upset that profitability had failed to improve despite double-digit growth in sales. (See Is Huawei in for a Bumpy 2017?)

Whether that directive has had any impact on Huawei's headcount may not become apparent until the publication of the 2018 annual report next year. The company had around 180,000 employees on its books in 2017, the same number it reported in 2016, but sales growth may have driven margin improvements without the need for hefty reductions.