Ericsson is pursuing the European customers of Huawei and Nokia in the belief that its rivals are not yet providing baseband technology that can be software-upgraded to support 5G services.

The Swedish vendor claims that its much-touted Ericsson Radio System (ERS) is currently the only 5G-ready baseband platform in the world and that demand for the product has exceeded its original expectations.

Under a new strategy, it is trying to build 4G market share through ERS sales with the goal of dominating the future 5G market. Its rationale is that operators will have little incentive to use Huawei Technologies Co. Ltd. or Nokia Corp. (NYSE: NOK) if they can simply upgrade ERS kit to handle 5G when that technology is standardized next year.

During a call with investors last week, Ericsson AB (Nasdaq: ERIC) CEO Börje Ekholm told investors that Ericson had already grown its 4G market share in China thanks to ERS interest, and that a continued push would have some impact on gross margins in the country during the final three months of the year. (See Ericsson in China: Dangerous Liaisons?)

Now the country's European chief has revealed to Light Reading that Ericsson is pursuing the same strategy in Europe, where it thinks 5G could take off sooner than previously expected.

"Our ambition in Europe is the same as in China -- to increase market share in 4G to be ready for 5G," said Arun Bansal, the head of Ericsson's business in Europe and Latin America, on the sidelines of an Ericsson 5G event in London. "With ERS we are the only vendor in the world delivering baseband that is 5G-ready today. When operators realize that there is a tremendous pull now to go for Ericsson baseband." 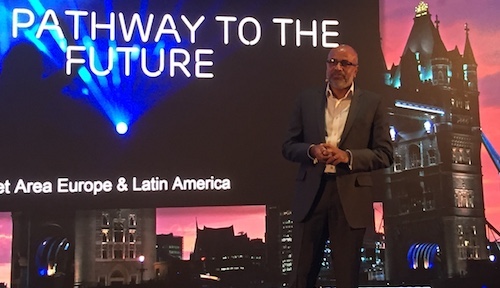 Ericsson already claims to have landed an ERS deal with Vodafone UK at the expense of its competitors, although it has long been the UK operator's main supplier of radio access network equipment. (See Ericsson Seals 4G, 5G Deal With Vodafone UK.)

"The one contract we announced was in London where we are swapping out one of the existing partners of Vodafone, and that is a sign of leveraging our ERS portfolio to drive market share in Europe," said Bansal.

Until nine months ago, Ericsson did not expect European operators to launch 5G services until 2022 due to "skepticism" about the business case. It is now predicting the first European launches will happen in 2019 or 2020 amid signs of growing telco interest in providing 5G services to business customers.

Ericsson had originally hoped that ERS would account for one half of all global radio shipments this year, but it claimed to have beaten this target when reporting its recent July-to-August results, with ERS then accounting for about 55% of shipments. It aims to stop shipping older platforms entirely next year.

Bansal says that 5G-readiness is not the only hardware attraction of ERS. "It weighs 40% less [than older products] and saves power by 40%," he claims.

Because Ericsson will not have to replace hardware when upgrading ERS to support 5G services, the product could help Ericsson to improve its profit margins in future.

However, the market-share push in China has met with some analyst concern that Ericsson is effectively giving away hardware to secure deals. During Ericsson's recent earnings call, Francois Meunier, an analyst with Morgan Stanley, expressed concern that Ericsson would not be able to sustain market share gains in the long run, citing the failure of a similar strategy in Europe several years ago.

Hit by a downturn in the market and its underperforming cloud and media divisions, Ericsson has reported a sequence of earnings setbacks in the last 18 months, although it noted improvements at its main networks business in the recent third quarter.

Under Ekholm, who took charge of Ericsson at the start of this year, its immediate goal is to double last year's operating margin to about 12% beyond 2018.

Bansal says most of the improvement will come from exiting loss-making contracts in non-core areas, such as fiber deployment and maintenance activities. Ericsson is also thought to be exploring a divestment of its loss-making cloud hardware and media assets.

In an email sent in response to Ericsson's baseband claims, a Huawei spokesperson said: "Our basestations are designed to support 5G. The Huawei radio platforms (5000 series Massive MIMO and 3000 Blade series RRU) are upgradable to support 5G NR [new radio] (numerology, frame structure etc.) right now. These platforms are already deployed economically; and the Huawei baseband platforms (both 5900 and 3910) are capable of supporting 5G NR according to 3GPP standards.

"The 3910 has been already successfully used in commercial networks, and the 5900 has been commercially available since the middle of this year and has started to roll out in the global market."

Light Reading approached Nokia outside normal business hours but had yet to receive any comments on Ericsson's baseband claims at the time of publication.

iainmorris 11/1/2017 | 6:50:52 AM
Huawei responds This story has been updated with comments from Huawei since it was first published.
Reply | Post Message | MESSAGES LIST | START A BOARD

iainmorris 11/1/2017 | 6:50:53 AM
Huawei responds This story has been updated with comments from Huawei since it was first published.
Reply | Post Message | MESSAGES LIST | START A BOARD

danielcawrey 11/2/2017 | 6:28:47 PM
Re: Huawei responds Well, I guess that's a strategy. Hard for me to say if what Ericsson claims is true or not. However, if they do have this baseband tech locked down, it would be very good for them. No sense in complaining.
Reply | Post Message | MESSAGES LIST | START A BOARD

kq4ym 11/13/2017 | 12:49:49 PM
Re: Huawei responds If 5G comes sooner than expected by competitors the strategy would seem to make sense having every ready to go at the starting line, while others try to play catch up. But, giving away some of the units may surely hurt the bottom line at least temporarily while the long terms results may be worth it.
Reply | Post Message | MESSAGES LIST | START A BOARD
EDUCATIONAL RESOURCES