Huawei unveiled its Balong 5000 5G modem Thursday and says the silicon will be integral to its first 5G smartphones, to be launched at Mobile World Congress at the end of February.

This is a major announcement for Huawei Technologies Co. Ltd , which is currently the biggest smartphone manufacturer in the world after Samsung Corp. , according to IDC ).

The modem is widely reported to be shown off in Huawei's foldable P30 Pro smartphone at mobile World Congress.

"This chipset supports a broad range of 5G products in addition to smartphones, including home broadband devices, vehicle-mounted devices, and 5G modules," the vendor said in a statement, indicating the breadth of its ambitions for the new wireless technology. (See A 5G Device Timeline for 2019). 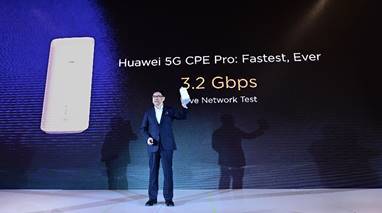 Huawei says that the unique selling point of the Balong 5000 is that it is the first multi-mode 5G chipset. That is, the chip supports 2G, 3G, 4G and 5G on a single chip. The Balong also supports Sub-6GHz 5G and high-band millimeter wave (mmWave) 5G on the chip.

Huawei claims that the Balong 500 can achieve downloads ten times faster than the "top 4G LTE speeds" achieved today. It is claiming peak downloads of 4.6 Gbit/s for sub-6GHz and up to 6.5-Gbit/s for mmWave. Like many 5G claims, however, these claims have not been independently tested yet. (See Getting Real About Mobile 5G Speeds.)

But, the Huawei numbers would be mind-blowingly fast, even compared to Verizon Communications Inc. (NYSE: VZ) stated current top speed of 900-Mbit/s for its 5G Home service in the US. In fact, Ookla found the average download speed over fixed (e.g., largely wired) broadband in the US was 95.25 Mbit/s in the third quarter of 2018. (See Verizon Sets Launch of '5G Home' and Verizon's Vestberg Mum on 2019 Capex but Ebullient on 5G Prospects.)

All this puts Huawei into direct competition with Qualcomm Inc. (Nasdaq: QCOM), which already has products using its X50 5G modem launched in the US. (See AT&T's Nighthawk 5G: Potential Download Could Cover a Wide Range of Speeds.)

And getting to sell 5G phones in the US could be a vexed question for Huawei. Currently, American users have to revert to Amazon or Ebay to pick up unlocked devices to use. None of the major US operators carry Huawei smartphones and they have been dropped by major retailers like Best Buy. (See Huawei, ZTE Face US Federal Ban and Best Buy to Drop Huawei in Another Blow to US Ambitions  Report.)

aberdeen.xu 1/27/2019 | 8:21:07 PM
spelling indicting the breadth of its ambitions for the new wireless technology------should be "indicating", not "indicting"
Reply | Post Message | MESSAGES LIST | START A BOARD
EDUCATIONAL RESOURCES