Every few weeks, Huawei Founder Ren Zhengfei is dusted off and sat like some latter-day Chinese royal before one of the world's most prestigious media titles. And whether he is meeting with the Wall Street Journal, the New York Times or the BBC, his message is nearly always the same: Huawei is being treated unfairly, it has never spied for China's government, US sanctions will fail and so on.

This time it was the turn of the Economist, a highly respected current affairs magazine with origins in nineteenth-century Britain. But if the set-up was familiar, the message was strikingly different. Not usually in the scoops business, the Economist had a more newsworthy discussion to report than any of its international peers: Huawei is proposing to sell its 5G assets to a Western rival. 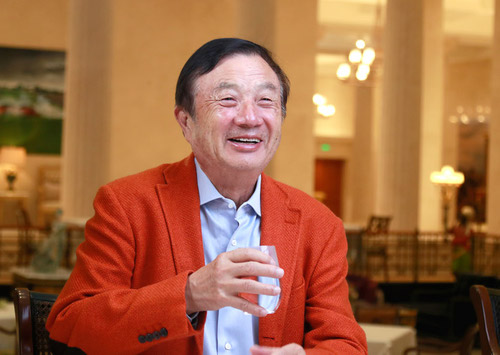 Ren Zhengfei, Huawei's founder, during one of his recent interviews with the media.

The entire report can be read here and includes the Economist's typical readable analysis of the latest proposal and the dilemma facing Huawei. The short version is that Huawei would charge a one-time fee for "perpetual access" to its "5G patents, licenses, code, technical blueprints and production know-how." The buyer would be free to make changes to source code once it had acquired the assets, perhaps to overcome Western government anxiety about Chinese snooping via network products. Huawei would retain existing 5G contracts and continue developing its own 5G kit. "A balanced distribution of interests is conducive to Huawei's survival," Ren is quoted as saying.

The proposal, which was aired in a two-hour interview, clearly begs lots of questions, not all of which were tackled in the Economist's story. Even under sustained US pressure, Huawei has been on a mission to dominate 5G, a successor to the earlier 3G and 4G standards that might ultimately prove far more important. China, likewise, seems determined to win a 5G race against the US, as a network-sharing deal between two state-backed operators recently showed. Has the outlook darkened so much that Huawei is suddenly prepared to transfer its knowhow and expertise to a rival? Would Chinese authorities accept that? Neither would have seemed a remote possibility before Ren's interview. And even as he discussed his plans, he carried on insisting that US measures have had a limited impact, and that Huawei now has "alternative suppliers" to US firms.

Moreover, the move seems unlikely to end the campaign against Huawei. Many of its existing 5G contracts are with operators in Western markets where governments have been urged by Trump's administration to ban Chinese vendors. Why would Huawei's opponents give up the fight if it is still the supplier? The company buying assets could also attract suspicion, even if it is free to alter Huawei's source code. And Huawei would either be strengthening an existing rival or bringing fresh competition into the market.

All that said, any company buying assets from Huawei would struggle to copy its success without such vast resources and experience of operating in low-cost markets -- not to mention its relationships with service providers worldwide. Acknowledging his surprise at the news, Gabriel Brown, a principal analyst with Heavy Reading, tweeted: "My immediate thought is that Huawei's success is not only due to technology -- it's also due to how the company is run, its immense growth in domestic markets and the 'rise of China' globally. That isn't replicable."

It's a good way to generate a unique idea.
Thanks for sharing