Here Are the US Military's Plans for 5G

MWC Los Angeles -- The US Department of Defense disclosed on details on Wednesday of its plans to test 5G, including increased spectrum sharing and applications such as VR training and smart warehouses.

The agency said will issue a final request for proposal (RFP) for 5G equipment vendors in early December, shortly after the agency's "5G Experimentation Industry Day" next month.

"The DoD is all-in on 5G," said the agency's deputy undersecretary of defense for research and engineering, Lisa Porter, in a keynote appearance here.

Porter also offered a timeline for the DoD's 5G efforts:

The DoD has already released a portion of the 3.5GHz band for sharing with commercial users. Under an innovative spectrum sharing system, the CBRS 3.5GHz band is now being shared between the US Navy and commercial operators like AT&T and Verizon.

Soldiers and 5G
So what does the DoD want to do with 5G? As Light Reading previously reported, Porter said the agency is planning to look at multiple use cases: 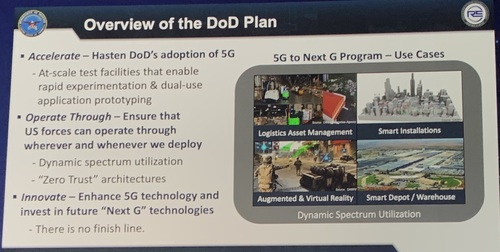 Porter said the DoD plans to install 5G networks into four different, unspecified military bases and would use the technology for three different applications:

Porter added that the DoD plans to issue additional RFPs next year.

Not surprisingly, Porter explained that the DoD would also look to ensure 5G security, including how the military could make sure that it obtains uncompromised 5G equipment and that its communications are secure.