Germany's 6B 5G Auction Should Be a Break Point for Telecom

Germany's 5G spectrum auction has become a bit like the Wimbledon tennis match between John Isner and Nicholas Mahut in 2010. That clash lasted a record-breaking 11 hours, and took place over three days, as each player refused to cede ground. Isner finally triumphed with the score at 70-68 in the final set. But his victory was Pyrrhic. So enfeebled was the giant American by his exertions that he was soon out of the tournament.

As this story was being written, telcos bidding for new 5G licenses in Germany were into round 407 of an auction that began in mid-March. The duration of the contest has no precedent, with Germany's 4G auction in 2010 lasting for 224 rounds. And the 6 billion ($6.7 billion) now offered is 1 billion ($1.1 billion) more than experts thought companies would spend. 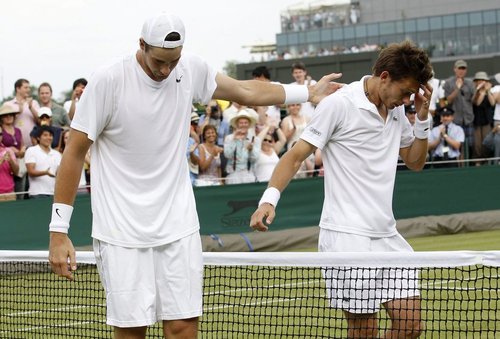 John Isner (left) and Nicolas Mahut at the conclusion of their epic 2010 encounter.

Unlike Isner, Germany's warring telcos -- Deutsche Telekom, Vodafone, Telefónica and 1&1 Drillisch -- are not in danger of a post-match collapse. The 6 billion they have pledged so far pales in comparison with the 50 billion ($56 billion) German telcos spent on 3G spectrum at the turn of the century. But as the industry prepares for the costly rollout of new 5G networks, with little prospect of any immediate revenue growth from new 5G services, the spectrum bill is a further squeeze. And while bidding has recently slowed, the contest is not yet over.

Telcos appear to be grasping expensively for a small amount of spectrum in the 3.6GHz range, the "mid-band" that looks optimal for the delivery of 5G services. The fight would have been less damagingly drawn-out had German regulators put more of these airwaves up for sale, according to Timotheus Höttges, the boss of Deutsche Telekom. Instead they chose to hold back 100MHz for industrial and local settings, such as German factories, leaving 300MHz to the telcos. Supply constraints have driven up the bids.

Competition has been especially fierce because of 1&1 Drillisch. Having previously bought network capacity from Telefónica, and functioned as a mobile virtual network operator, the broadband company is now determined to build a fourth mobile network using spectrum it picks up in the auction. After round 406, 1&1 Drillisch accounted for more than 1.1 billion ($1.2 billion) of the amount bid. Since the auction began, its share price has lost a quarter of its value as investors worry about the consequences of spending so much.

Outside Italy, Germany now values the mid-band at a higher level than any other European country that has licensed 5G spectrum. Were the auction to finish now, German telcos would pay about $0.16 per megahertz per head of population (per MHz pop, a common way of valuing spectrum) for 3.6GHz licenses. That edges Germany ahead of the UK, which raised about $0.15 (at current exchange rates) per MHz pop during a 3.4GHz auction in 2018. Spanish companies last year paid just 0.05 during a 3.6-3.8GHz auction (although this calculation does not consider usage fees they are also charged). Finland's mid-band sale in October raised as little as $0.04. 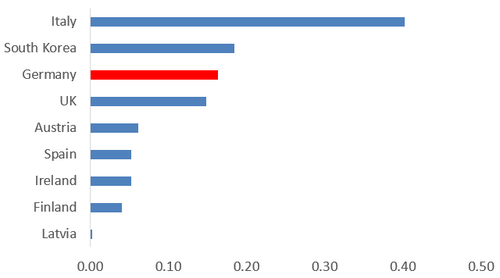 Sources: Companies, regulators, Light Reading. Note: German auction is still open and the amount shown here reflects the value of spectrum on the morning of May 24.

But the German sale is nowhere near Italy on this measure, and it will not even get close. After slapping just 200MHz of mid-band spectrum on the table, and slicing it like a badly cut pizza into uneven segments, Italian regulators made off with around $0.40 per MHz pop. The auction "winners" are now choking on their rewards. Telecom Italia and Vodafone, which landed the biggest mid-band concessions, are busy slashing jobs and pooling assets to ensure 5G rollout is affordable.

German authorities may still have cause to worry. While the country's operators are in healthier shape than Italy's, a large spectrum bill risks slowing down the pace of 5G rollout and jeopardizing national ambitions. With its large manufacturing sector, Germany is hopeful that 5G will support Industrie 4.0, a government initiative to bring communications technologies into factories and the workplace. The productivity boost this promises may be critical if Germany is to remain competitive with the US, China and other fast-developing Asian countries.

The German telecom regulator is reportedly unrepentant. Jochen Homann, the president of the Bundesnetzagentur, is said to have argued that bidders knew the conditions of the auction before it started and will have prepared accordingly. Yet analysts thought a spectrum sale would raise between 3 billion ($3.4 billion) and 5 billion ($5.6 billion), an upper limit the auction has now breached. The European circus act, where governments try to balance their desire for a windfall with longer-term economic interests, appears to be going wrong.

Noting China's habit of simply giving away spectrum to operators, some experts believe European regulators should follow suit, relinquishing the windfall for the sake of the market. The epic tennis match between Isner and Mahut ultimately led to a rule change at Wimbledon, with the introduction of final set tiebreaks at 12-12 starting this year. But no such overhaul seems imminent in the world of telecom. As governments in the UK and France greedily eye forthcoming 5G auctions, operators will have to stagger on.

Gabriel Brown 5/24/2019 | 9:05:56 AM
German vs UK Comparison Given it's a "cleaner" allocation in Germany (100MHz contigous) vs UK (40MHz and 50MHz blocks) and the German market is less competitive than the UK, it is logical that this spectrum should price higher in Germany.