For UK 5G Users, the Only Way Is Huawei

If you are a UK smartphone user who upgraded to the latest 5G technology when it recently became available, your service runs over a network built by Huawei, a controversial Chinese company now at the center of the geopolitical clash between the US and China.

This is an inconvenient truth for the UK government. Its Department for Culture, Media and Sport (DCMS) is in the middle of a supply chain review that will decide whether Huawei should be allowed anywhere near 5G. Hardliners and US officials see the Chinese company as a threat to Western security, arguing China's government can use Huawei's products to spy on other countries (something Huawei vehemently denies).

Yet in its desperation to beat rivals to 5G, BT, the UK's former state-owned monopoly, has in the last few weeks used Huawei's network gear to launch its service. Customers in the cities of Belfast, Birmingham, Cardiff, Edinburgh, London and Manchester can upgrade to the higher-speed technology courtesy of the Chinese vendor. 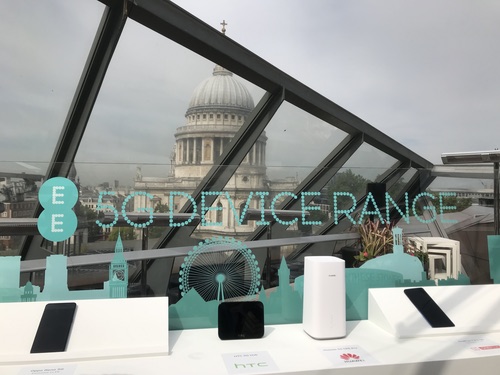 Until rival operator Vodafone launches its own 5G service next month, there is zero alternative to Huawei. In its radio access network -- the mobile sites that dot the landscape -- BT relies on two suppliers: Huawei, in urban areas, and Finland's Nokia, in less densely populated communities. Because BT's initial rollout is focused on cities, it falls naturally under the remit of the Chinese.

Could BT not have used a different supplier, given the current government concerns? The operator has been stridently opposed to any switch, arguing at a conference last week that a ban would restrict choice and hinder 5G deployment. Devotion to Huawei is not a great surprise: It has long had a reputation for aggressive pricing and is today seen as a technology leader by independent experts.

BT has remained stubbornly resistant to change even though Nokia has been trying to persuade operators that it can overcome the technical challenges of a "swap-out" in a cost-effective manner. "If you have another vendor's 4G and want to bring in Nokia's 5G, then rather than use the other vendor's 4G as the link to 5G you introduce a thin layer of Nokia 4G," said Rajeev Suri, Nokia's CEO, during a recent interview with Light Reading.

Despite touting this interoperability fix, Nokia has not been able to add the UK to a shortlist of countries where its network products are currently supporting 5G services, the company revealed to Light Reading last week. Only in Italy, South Korea and the United Arab Emirates are operators providing 5G services on Nokia equipment.

The Finnish vendor has not been able to book about 200 million ($228 million) in revenues because customers in some markets do not consider its 5G software to be ready, it has previously acknowledged. "Our revenue recognition policies and contractual terms require reasonable commercial availability and customer acceptance of our own system software before we can recognize revenue related to a new generation of mobile technology," Suri told analysts during an earnings call in April.

Neither Ericsson nor Huawei has flagged software readiness as a constraint, and representatives from both companies have drawn attention to Nokia's 5G difficulties in talks with Light Reading. Ericsson boasts 5G service launches across a bigger number of markets and should add the UK to that list when Vodafone joins BT in the 5G market next month.

Brain surgery
But it is not just on the radio side that BT looks heavily dependent on Huawei. The Chinese vendor is also responsible for BT's mobile "core," the "brain" of the network that stores customer data and makes important decisions about traffic routing and other operations.

It is this part of the network that has some government spooks worried. In the radio network, a bad actor could more easily be contained, they argue. In the core, it could potentially bring down the entire system. Operators including BT and Vodafone are in broad agreement. They were hoping any DCMS review would make this distinction, until US hawks recently indicated a core-only ban might not go far enough.

Just how, then, did BT end up with a Huawei core? While the operator has long had a policy not to use Chinese vendors in this seemingly vulnerable part of the network, its 2016 acquisition of EE -- the move that took it back into the mobile market after years as a fixed-line business -- brought it into core network contact with Huawei.

At the time, this would not have seemed as much of a big deal. Barack Obama was still in the White House, China and the US were on better terms and there was little commotion about Huawei. BT would have assumed it could phase out Huawei without anyone much caring how long that process took.

But when Donald Trump's administration stuck Huawei's name on the US list of supervillains, attention quickly focused on BT's core-network predicament. To stick with the "brain" analogy, extracting a vendor from this part of the network is a complex surgical operation, and BT executives have indicated it may take years.

To complicate matters, next-generation 5G core technology is still not ready. BT is providing 5G services over Huawei's radio network on Huawei's 4G core, in what is commonly referred to as a "non-standalone" deployment of 5G. The 3GPP, a standards body, has already finalized technical specifications for a 5G core under its "Release 15" update. But vendors are not yet offering "standalone" technology.

In any case, Howard Watson, BT's chief technology and information officer, prefers to wait until Release 16, which is not due to be finalized until March next year. Only with this will BT get all the functionality it wants, including the ability to support 4G, non-standalone and standalone services on one system. Although it is in core trials with Cisco, Ericsson and Nokia, it has yet to decide which vendor to use, and will not be able to start deploying a new core network until the middle of next year. The next challenge will involve migrating mobile customers over to the new core -- a process that could take most of 2021, says Watson.

All this means Huawei may be around in BT's mobile core until 2022, by which stage the US may even have a different government. The date could easily slip, too. The 3GPP is understood to be worried that today's geopolitical fight could result in the fragmentation of the 5G standard and a return to the days when different regions used different technologies. Given Huawei's influence over standards-setting activities, the current uncertainty could easily put a brake on progress.

Political turmoil and intervention by Huawei's rivals have made the DCMS decision even harder. Following the resignation of Theresa May, the UK is likely to name Boris Johnson, a hardline "Brexiteer," its next prime minister, increasing the likelihood the UK leaves the European Union in October without any deal. This could propel the country into the arms of Trump as it looks for a lucrative trade agreement outside Europe. But US deals and intelligence sharing may not materialize unless Johnson or his successor shuts the door on Huawei.

In the meantime, any UK opportunity to persuade US authorities of the difference between core and radio networks may be disappearing, thanks partly to the efforts of Ericsson. "5G architecture will make it hard to say where the intelligence is sitting and where is the connectivity," says Arun Bansal, the head of Ericsson's business in Europe and Latin America. "That boundary will disappear in 5G simply because of the way the architecture will be done, and it will be hard to say this is core and this is radio." For BT, the risks of building a 5G network with Huawei seem to be growing by the day.