In a move aimed at opening up more critical midband spectrum for 5G, FCC Chairman Ajit Pai today announced he intends to circulate a C-Band item next week in anticipation of a February vote, according to Multichannel News.

Pai's announcement happened following today's FCC meeting, Multichannel News noted, adding that the proposal is to auction 280MHz of the 500MHz in the band that today is largely used for satellite delivery of TV programming. If things go as planned, a C-Band auction could get underway before the end of 2020.

Reports have circulated that the FCC was moving toward a vote next month that, according to Reuters, would endorse "low single-digit billion-dollar" incentive payments to existing users of the C-band spectrum and accelerate the speed of the transition. Bloomberg reported that such payments to be shared by incumbent satellite providers would be less than $10 billion. Multichannel News said Pai declined to comment on the reported incentive payment piece.

A C-Band official told Reuters that low-single-digit-billion incentive payments are "not going to do it." Reuters added that the FCC believes it can push ahead with the item without new congressional legislation.

This flurry of activity comes just days after the C-Band Alliance (CBA), a group backed by incumbent C-band band users Intelsat, SES and Telesat, put forth studies (PDF) from NERA and Evercore that the 280MHz of spectrum set to be auctioned is valued in the range of $43 billion to $77 billion. In a separate filing, the CBA said it believes it could cost about $3.3 billion to clear 300MHz of C-band spectrum.

Striking Up the C-Band 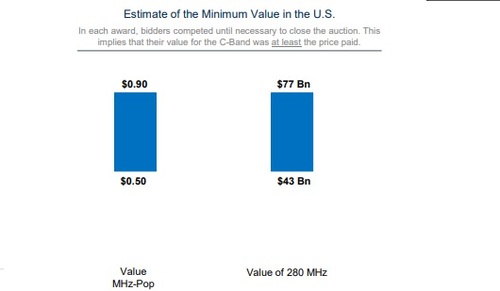 The CBA argues that its members deserve fair value if they're forced to vacate a portion of the band that has helped to underpin their businesses.

"The point is a simple one: if the government determines it to be in the public interest to push out incumbent users who for decades have built their businesses around this spectrum," the CBA said, "then fairness and the law dictate these important rights-holders should receive fair value for their efforts in expediting the clearing of this spectrum and making it available far more quickly than would otherwise be possible."

Soon after the CBA analyses was announced, reports surfaced that John Kennedy (R-La.) and two Senate Democrats -- Brian Schatz (D-Hawaii) and Maria Cantwell (D-Wash.) -- had filed legislation (the Spectrum Management and Reallocation for Taxpayers Act, or SMART) that would allocate just $1 billion of auction revenue for incentive payments to incumbent users and $5 billion of auction proceeds allocated for C-Band clearing costs.

While the "situation is obviously fluid," the odds of the CBA "getting anything close to what they asked for last week have gone down," New Street Research policy advisor Blair Levin wrote in a note issued to clients earlier this week. He also believes that the CBA's public push to be treated "fairly" in these proceedings means the risk of litigation has been elevated.

"Without other stakeholder support, CBA's efforts to get the government to raise its allocations will be an uphill climb," Levin added.