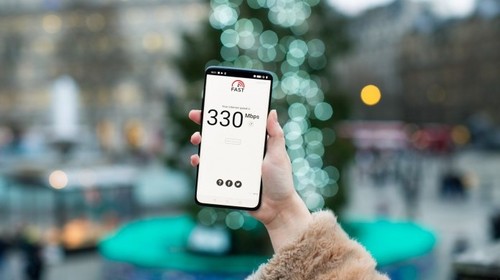 If all you want for Christmas is 300 Mbit/s and a sore arm from taking Yuletide selfies, then you might be in luck... (Pic: EE)

appstatus 12/21/2019 | 7:48:04 AM
5G is the best option The best of the internet that is we are using today that is giving the best services i always like to browse the latest video and shows the best streaming on the record to download the latest apps
Reply | Post Message | MESSAGES LIST | START A BOARD

appstatus 4/3/2020 | 1:17:30 PM
Best apps to check the spped There ara various <a href="https://bestappsapk.com/hill-climb-racing-apk/">apps</a> are to be developed to measure the speed of the data transfer rate best is the speed test i have tasted but the speed of 5G is much faster then the 4G and also stability this all helpful for all of us to download largest data in lesser time
Reply | Post Message | MESSAGES LIST | START A BOARD

appstatus 4/3/2020 | 1:20:09 PM
innovation in life  i like this as the very beautiful for all us 5G created innovation the life
Reply | Post Message | MESSAGES LIST | START A BOARD
EDUCATIONAL RESOURCES