Signs of progress
Ericsson's problems began in mid-2016, when former CEO Hans Vestberg began to complain about weak conditions in some of Ericsson's biggest markets. Earlier moves into adjacent markets such as cloud hardware and media have not worked out as planned. And in Europe and Asia, Ericsson has struggled to fend off competition from Chinese rivals Huawei Technologies Co. Ltd. and ZTE Corp. (Shenzhen: 000063; Hong Kong: 0763), which have flourished while Ericsson's business has shrunk. (See Huawei Hits $92B in 2017 Sales.)

Under current CEO Börje Ekholm, who took charge in early 2017, Ericsson has been guiding for an improvement in conditions this year. But its revenues have continued to slide in the early part of 2018. Overall sales were down 9% in the quarter, to SEK43.4 billion ($5.1 billion), compared with the year-earlier period, although Ericsson said the decline would have been just 2% were it not for adverse currency movements (and following other adjustments for "comparable units.")

In a nutshell, Ekholm's plan is to make Ericsson a smaller business with fatter margins. Sales next year are expected to be around SEK10 billion ($1.2 billion) less than in 2016 as the company concentrates mainly on being a market leader in 5G, a next-generation mobile technology.

Consequently, and as Ekholm explained during a call with analysts earlier today, sales are falling as Ericsson continues to quit the digital and managed services contracts it deems to be unprofitable. (See MWC 2018: Ericsson CEO Interview.) 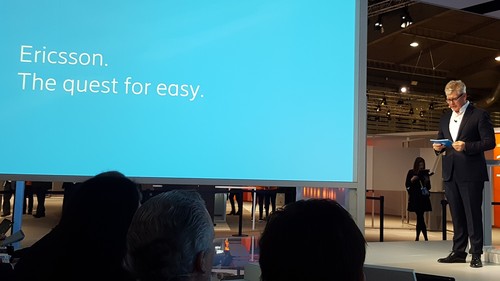 The quest for easy is proving tough: CEO Börje Ekholm checks his notes at this year's MWC event in Barcelona.

Even so, when adjusted for foreign exchange effects, sales were up in North America, the Middle East, Africa and Latin America as some customers began preparing for the rollout of 5G networks and others made improvements to their 4G systems. On the downside, there was a deterioration of conditions in China, where service providers have largely finished building their 4G networks.

On the networks side, overall net sales were down 9.5%, to SEK28.6 billion ($3.4 billion), while the operating margin rose to 13.5%, from 12.8% a year earlier. Profitability growth was driven partly by interest in Ericsson's latest radio platform. Called simply the Ericsson Radio System (ERS), this generates higher margins than earlier systems and today accounts for about 84% of total radio deliveries, up from just 61% of the total this time last year. It can also be "software-upgraded" to support 5G services as and when they are introduced, say Ericsson executives. (See DT Ditches Nokia From Its German Radio Access Network.)

While Ericsson's guidance is based on an assumption it will not see any commercial 5G business until after 2020, Ekholm now expects otherwise. "We think there will be revenues ahead of that, actually," he said. "We will see commercial revenues this year and clearly next year."

Much of that interest is coming from North America, where the biggest mobile operators are busily engaged in a 5G marketing battle and where authorities have blocked Huawei and ZTE from doing business with the major operators.

Indeed, ZTE has now said its very future could be at stake after US authorities this week banned it from buying US-made components for the next seven years. Watchdogs say the Chinese firm issued misleading and false statements after it last year paid a $900 million fine for breaching sanctions on Iran. (See ZTE in Existential Crisis as It Slams 'Unfair' US Ban, Considers 'Judicial Measures'.)

Analysts believe the setback for ZTE could be an opportunity for Western equipment companies like Ericsson and Nokia Corp. (NYSE: NOK), but Ekholm was coy when asked if he had already seen a positive impact.

"I think it is too early to comment on that and our focus is on having a competitive product in the market," he told analysts. "Many customers are asking questions and that is not so strange, but let's refrain from summarizing that yet."

Ericsson continues to guide for a sales decline in the overall market for radio access networks (RAN) of about 2% this year, after witnessing a much sharper fall in 2018, and now expects RAN market sales to increase at a compound annual growth rate of 2% over the 2018-22 period.

The possible risk is that an industry shift to more open and virtualized RAN technologies allows telcos to reduce equipment spending and leads to the emergence of new vendors. (See Nokia Seizes Open RAN Initiative as Ericsson Holds Back.)

Asked if Ericsson's market guidance factored in that risk, Norrman says estimates are based on external views and that Ericsson is currently involved in discussions about the use of open source technology. "We use external sources but we think they are reasonable," she says. "We are looking at future architecture and network possibilities. Those are definitely a part of what we are."

In "emerging business and other," a grouping which now includes its long-suffering media operations, there was also good progress on margin improvements. While still unprofitable, its operating loss narrowed to SEK1.1 billion ($130 million), from SEK3.1 billion ($370 million) a year earlier, with sales down 11%, to SEK1.6 billion ($190 million).