Ericsson has taken a giant step closer to profitability for the first three months of 2018 thanks to hefty cost cutting, a renewed commitment to R&D and the ditching of unsatisfactory contracts. (See Ericsson Reports Q1 Improvement.)

With sales still on the slide, the ailing Swedish equipment vendor reported its sixth straight operating loss as it struggled to execute a turnaround. But that loss narrowed to just 300 million Swedish kronor ($35.6 million) in the first quarter from SEK11.3 billion ($1.34 billion) a year earlier. (See Ericsson: Desperately Seeking Profitability and Ericsson Stuck in Loss-Making Rut, Offloads Majority Stake in Media Unit.)

The update gave a huge boost to Ericsson during morning trading in Stockholm, with the company's share price up 16.5% at the time of publication.

The improvements came as Ericsson AB (Nasdaq: ERIC) slashed another 3,000 jobs in the recent quarter and said that 18,000 positions (including contract jobs) have been axed since July 2017. The number of full-time employees has now dropped to 97,581 from 111,464 in the final quarter of 2016.

Ericsson's target is to reduce annual costs by around SEK10 billion ($1.2 billion) by the middle of this year. It claims already to have realized savings worth SEK8.5 billion ($1 billion) across a 12-month period, but says not all of these savings have yet fed into quarterly results.

Those remarks will put additional pressure on the company to maintain its recent momentum, and analysts may now be expecting a return to profitability in the second quarter of 2018.

While Ericsson is not providing any concrete short-term guidance on that front, it hints to Light Reading that further improvements may be right around the corner. "After focusing on stability in 2017, profit improvement activities are now accelerated in all areas," says Helena Norrman, Ericsson's chief marketing officer. "Gross margins can vary between quarters but cost reductions will further improve earnings."

Moving in the Right Direction 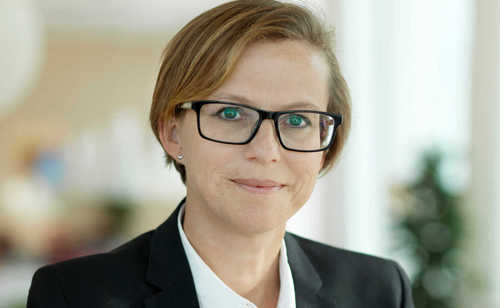 Helena Norrman, Ericsson's chief marketing officer, hints that a return to profitability is right around the corner.

Further layoffs look a certainty in the second quarter, as Ericsson aims to hit its cost savings target. The company was last year reportedly seeking to cut as many as 25,000 positions across the company. It has never confirmed that as an official target but is already nearly three quarters of the way there. (See Ericsson Plans 25,000 Job Cuts – Report.)

Norrman says margin improvements are also coming from investments in R&D, which has been ringfenced from the cuts happening elsewhere. Indeed, R&D spending rose from SEK31.6 billion ($3.8 billion) in 2016 to SEK37.9 billion ($4.5 billion) last year, and Ericsson today said it had recruited another 500 engineers for its 5G business. "We need to keep the portfolio competitive," says Norrman. "This is about investing in R&D to get higher gross margins." (See Huawei Dwarfs Ericsson, Nokia on R&D Spend in 2017.)

At both its digital and managed services businesses, Ericsson has also been renegotiating or scrapping what Norrman calls "non-performing contracts."

Excluding restructuring charges, Ericsson's gross margin came in at 36% in the quarter, up from 19% a year earlier and only slightly below a 2020 goal of 37-39%. At minus 0.7%, its current quarterly operating margin is not even close to the annual target of 10%, which Ericsson similarly hopes to realize in the next couple of years. But as the effect of staff cuts becomes visible in the financials, and as the digital services outfit is hammered into shape, Ericsson should start to close that gap.