BARCELONA -- MWC 2018 -- Deutsche Telekom will start commercial trials of the next-generation 5G standard this year before the technology becomes "fully live" in 2020, the German operator announced at a press conference in Barcelona earlier today.

It will carry out major commercial trials in all of its "big, integrated countries," said Claudia Nemat, the board member for technology and innovation, meaning countries where it owns both fixed and mobile infrastructure.

The first trials will happen in Germany, Nemat told reporters today, with Hungary and Slovakia likely to follow. In both markets, Deutsche Telekom owns the former state-owned fixed-line monopolies. 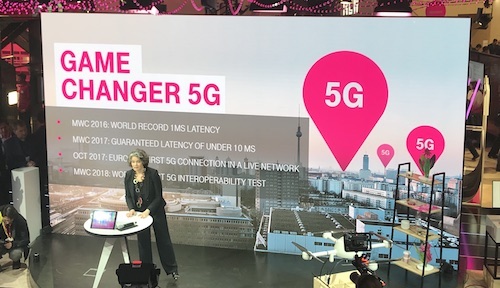 The update follows 5G standardization progress in late 2017 and comes a year after Deutsche Telekom AG (NYSE: DT) announced ambitious plans to build 5G networks across its entire footprint, without indicating how quickly it would roll out the technology.

At the time, Deutsche Telekom executives had highlighted concern that 5G rollout would prove costly without progress on the technology front and more investor-friendly regulation.

While many questions have yet to be answered in the technology space, Deutsche Telekom CEO Timotheus Höttges had another go at Europe's regulatory authorities, which have already come under attack this week from Sweden's Ericsson AB (Nasdaq: ERIC) and UK-based Vodafone Group plc (NYSE: VOD). (See Ericsson CEO: Net Neutrality Threatens 5G and Europe at Risk of 'Slow, Fragmented' 5G, Warns Vodafone Boss.)

"I hope that we get less regulation in the mobile space and not more ideas like mobile wholesale access or national roaming, which would be counterproductive to the buildout of 5G in our environment," he said at today's press conference.

With a 5G spectrum auction due in Germany later this year, Nemat also urged regulators not to overcharge for the spectrum they release to operators. "It will be important that spectrum auctions are decent, that no one has the idea the auction is putting money toward the financial deficit of the state," she said.

Nevertheless, in preparation for its 5G trials and subsequent launch, Deutsche Telekom has been making its mobile antennas "5G-ready" in Germany and several other markets, using single RAN (radio access network) systems that will allow it to run different radio standards over the same hardware.

Other network investments are also laying the groundwork for 5G rollouts. Those include the launch of 4G services using 900MHz spectrum, which gives Deutsche Telekom the wide area network coverage it will need with higher-speed mobile data services. The operator today hinted that 900MHz might in future be used to support 5G services.

The deployment of more fiber also figures prominently in Deutsche Telekom's network plans. Having rolled out 40,000 kilometers of fiber last year, it is planning to lay another 60,000 kilometers in 2018.

"Fiber is also important in the context of 5G," said Claudia Nemat, the operator's board member for technology and innovation, at Mobile World Congress this afternoon.

Providing multi-gigabit-speed connections, 5G technology will need fiber for the "backhaul" connections between basestations and core network systems. With a virtual radio access network, which would separate baseband processing from remote radio units, fiber may also be needed for the "fronthaul" links between those different network elements.

Deutsche Telekom has yet to make any firm decision about RAN virtualization, however. "Fully fledged RAN virtualization could bring a lower TCO [total cost of ownership], but it is just a hypothesis and we need to know whether the assumptions are plausible," said Alex Choi, who leads Deutsche Telekom's network strategy, during a conversation with Light Reading earlier this week. (See DT-Owned MobiledgeX to Power German Telco's Edge Rollout.)

Some of the operator's investments this year will also support the construction of new edge facilities in Germany. By helping to reduce latency -- the delay that occurs when sending signals over data networks -- those edge facilities could in future allow Deutsche Telekom to provide connectivity for remote surgery, factory automation and other, so-called "mission-critical" applications.

However, the first 5G services are likely to be less out of the ordinary. Among other things, Deutsche Telekom has been testing a fixed wireless access (FWA) service it calls "virtual fiber," which uses 5G in high spectrum bands to support residential broadband connectivity. "This can complement access technologies to bring gigabit speeds to those who do not want digging in their garden," said Nemat.

Nemat has been working on the virtual fiber technology with vendors -- including Huawei, Samsung Electronics Co. Ltd. (Korea: SEC) and Ericsson -- as well as through the Telecom Infra Project (TIP), a Facebook-led initiative aimed at lowering the cost of building data networks.

It already claims to have made a breakthrough with TIP on the issue of signal propagation in higher-range frequencies, which do not penetrate objects as well as low-band spectrum.

"We have solved this," said Nemat. "When that happens, the traffic gets automatically rerouted to other antennas. This is a solution we have with Facebook. We have set that up in Berlin and will [also] test this in Hungary."

Deutsche Telekom is also working with the city of Dresden and the Dresden University of Technology on a smart energy grid powered by 5G communications.

The operator says it could potentially use about 12,500 of its German street cabinets as energy charging stations. "The trick is having systems that can manage energy in a decentralized and bidirectional way," said Nemat. "Today's networks are too stupid but 5G can help with its low latency and high capacity to manage such a decentralized network of devices."

Höttges said the cabinets the operator has approved as potential charging stations all come with power supply and metering systems.