"I feel like I'm in a Hollywood movie," said renowned surgeon Prokar Dasgupta, donning a haptic glove during a demonstration of 5G-powered remote surgery at King's College in London earlier today.

It looked like something out of a Hollywood movie, too. With up-and-down movements of his arm, Dasgupta, a professor at King's and a urology surgeon at Guy's Hospital, was able to control a robot on a nearby table -- even if he wasn't quite ready to carve into a live subject.

Such technologies could revolutionize the healthcare industry, says Dasgupta. Instead of traveling to city-center hospitals for operations, patients could undergo surgery at local facilities. Medical professionals could train the next generation of surgeons remotely, rather than in the same room. Hospitals would ultimately morph into data repositories, storing information about patients equipped with "medical-grade" wearables, according to Vishnu Singh, the head of Ericsson's ConsumerLab market research division. 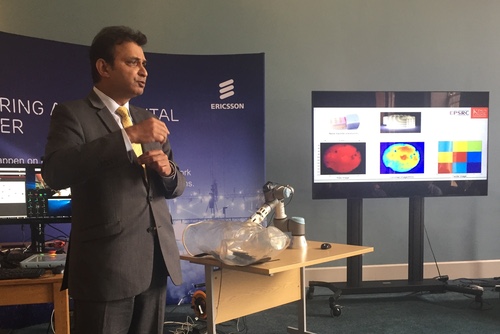 Renowned surgeon Prokar Dasgupta is a strong advocate of using 5G technology in a healthcare setting.

But it will not happen without 5G, says Dasgupta, delivering a withering assessment of older network technologies in a healthcare setting. "It is not fast enough and it is not secure enough," he said about 4G technology. "5G is the solution."

Ericsson AB (Nasdaq: ERIC) is clearly delighted to be able to call on such a prestigious advocate of a technology it desperately hopes will fuel sales growth in the next two or three years (assuming the Swedish vendor is still around by then). According to his Wikipedia entry, the Daily Mail newspaper rated Dasgupta one of the top ten prostate cancer surgeons in the UK back in 2010. Getting him to bang the 5G drum is about as good as endorsements come on the healthcare side.

Yet his enthusiasm only reinforces the impression that the real beneficiaries of 5G -- as with previous network technologies -- will be the end users rather than the telcos that roll it out.

How telcos can profit from 5G in a healthcare setting is arguably an even bigger conundrum than other business case challenges surrounding the next-generation mobile standard. The investments needed to support low-latency, ultra-secure 5G networks on a nationwide scale are unlikely to be insignificant. But without that underlying infrastructure, Dasgupta's vision will be hard to realize. (See The Growing Pains of 5G.)

The revenue case does not look compelling, either. Connectivity revenues have continued to fall despite heavy investments in previous next-generation network technologies. The 5G standard is expected to create new service opportunities in the much-hyped Internet of Things (IoT), some of which will undoubtedly relate to healthcare. Yet Northstream, a Swedish consulting and market research business, reckons IoT will only ever account for between 1% and 3% of revenues for most telcos. It is skeptical partly because the revenue contribution from a lot of machine-based connections will probably be negligible, and also because it thinks most IoT revenues will be captured by traditional systems integrators focused on "solutions" rather than connectivity. (See 5G Guru Predicts Rollout Disparity.)

Ericsson, unsurprisingly, is bullish, saying the "addressable market" for 5G operators in healthcare alone will be worth about £3 billion ($3.9 billion) in the UK in 2026. That represents about 8% of what UK operators made in total in 2015, according to regulatory authority Ofcom. In all likelihood, though, operators will have to become more than just connectivity providers if they are to see most of the healthcare-related revenues. Across eight global industries that Ericsson has examined in collaboration with consulting firm Arthur D. Little, connectivity and "infrastructure provisioning" accounts for only about a third of the overall revenue opportunity for a 5G player.

Next page: Toward a 5G hospital

Michelle 5/31/2017 | 11:07:11 PM
life gain This is one of the more compelling reasons for pushing 5G forward. Great mobile experiences for device users is an easy win, connecting healthcare could be big. I hope they figure out the cost.
Reply | Post Message | MESSAGES LIST | START A BOARD
EDUCATIONAL RESOURCES