DENVER -- Dish Network's Charlie Ergen said that his company is eying a wide range of potential services and business models with its planned 5G network, including fixed wireless services in rural areas and dynamic pricing options for network access.

However, Ergen acknowledged that the company faces a wide range of steep obstacles as it works to build a nationwide 5G network.

"It's harder than I thought it was going to be," Ergen said of Dish's initial work to build a nationwide NB-IoT network. Dish recently boasted of activating its first NB-IoT tower; the company has said it will finish its NB-IoT buildout by this time next year in order to meet the FCC's spectrum license buildout requirements. "We're learning about it," Ergen said of the wireless industry.

But Ergen said Dish will build a 5G network. "We're really, really, really committed" to building a wireless network, including an eventual 5G network, Ergen said during a keynote appearance here at the spring show of the Competitive Carriers Association (CCA), a trade association for the nation's smaller wireless network operators. "There's no guarantee [of success]. We may fail. But you don't know until you swing the bat."

"Failure is not an option. So that's our attitude," he added. 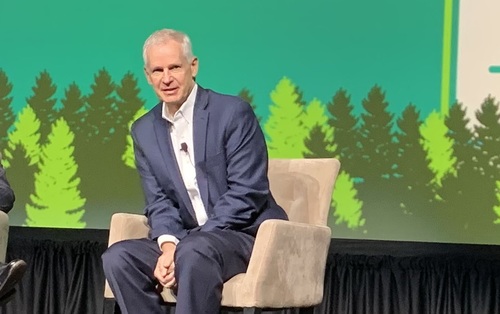 Charlie Ergen said Dish is looking to work with CCA members in areas such as tower access, distribution and sales of the company's planned 5G network.

On fixed wireless specifically, Ergen couched his comments around Dish's investment into Tarana Wireless, which Ergen said has developed near line-of-sight and interference cancelation technology that could dramatically improve fixed wireless services. Indeed, Tarana just last month announced a massive $60 million round of funding with Ergen's EchoStar and Khosla Ventures.

Ergen cautioned that Tarana's products haven't been field tested yet, but he said the company's technologies could pave the way for Dish to deploy fixed wireless equipment alongside its 5G and NB-IoT equipment on towers. And that would allow Dish to sell mobility services, fixed wireless services and video services (Dish of course sells satellite TV and streaming video services through its Sling TV offering).

"There's economies of scale to your buildout," Ergen said of adding fixed wireless capabilities alongside mobility services and video services. "You could be selling mobility and you could be selling fixed wireless at the same time," Ergen said, adding that Dish could potentially sell that bundle of mobility, fixed and video service in rural areas for $100 -- much lower than competitors price such offerings. "The missing piece we don't do today is the broadband connection."

On the topic of dynamic pricing, Ergen pointed to the business models of Uber and Airbnb as examples of how Dish might approach the overall 5G market. He said those companies are looking at underused assets -- Uber with cars and Airbnb with houses -- and are figuring out ways of increasing the usage of those assets. With Uber, for example, Ergen said cars typically sit unused for 95% of the time, but with Uber they can be put to use driving other people around.

Ergen said Dish would look to do the same kind of thing in 5G by making sure that the capacity in Dish's promised 5G network is fully monetized through technologies like network slicing and approaches like dynamic pricing.

And to offer that kind of service, Ergen said Dish would build its network using the latest software and virtualization technologies. He pointed to Reliance Jio in India and Rakuten in Japan as examples of operators that are building virtualized, cloud-based networks of the kind that Dish aspires to.

"We think our capex will be somewhat less than what the incumbent carriers have spent," Ergen said of the approach.

Finally, Ergen essentially made a plea directly to the rural wireless carriers at the CCA show, noting that Dish would work with them on things like tower access, distribution and sales of its planned 5G network.

"I guarantee you, I will respond," Ergen said of requests from such players. He even spelled out his email address so operators could get in touch with him directly. "Call me, email me... We'll talk to anybody."

"We can be a path for you for 5G," he added. With network slicing, "you should be able to lease a slice of our spectrum and it should look like yours."