Cisco Systems saw a hefty 13% decline in its service provider business for the most recent fiscal quarter, but expects revenues to grow once service providers start investing seriously in 5G networks.

That's a song that a couple of Cisco's competitors have been singing too, but unlike most of the other guys, it's not a sad song for Cisco. That's because overall revenues for Cisco were up for the quarter.

Chuck Robbins, Cisco chairman and CEO, said in a news release that performance was strong "across the business" [Editor's note: Or, rather: across the business except for service providers, which stunk like week-old sushi. We fixed that for you. You're welcome!] 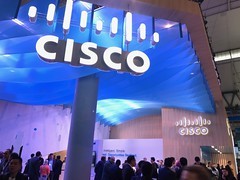 Service provider sales are slow because they are leveraging their existing network core to run early 5G trials, Robbins said. But as the number of connections and capacity needs increase, service providers will build out new backbones for 5G infrastructure, in 2020, which will help Cisco. In particular, Cisco will see strength in the packet core and core routing backbone, Robbins said.

One analyst asked whether the move to virtual network functions (VNFs) affects Cisco. Cisco CFO Kelly Kramer said the transition helps Cisco, which is moving to software and increased automation for all customers, not just service providers.

Weakening service provider revenue combined with increasing overall sales has been an ongoing trend for Cisco, in its second and first quarter as well as the most recent financial period.

In another industry shift, Cisco is seeing its customers move to wireless-first, particularly WiFi 6, which Cisco sees as strategic. WiFi 6's enablement of low latency, immersive experiences will drive a need for organizations to upgrade their network backbones, Robbins said. "Our guys like to say that behind every great wireless network is a great wired network," he said. The transition to WiFi 6 will need to a network technology refresh, which will benefit Cisco, he added.

The company's security business was a particular highlight, up 21%, albeit off a relatively small base, to $707 million. Applications were up 9% to $1.431 billion.

Infrastructure platforms -- Cisco's historical bread-and-butter networking equipment business -- is still the lion's share of Cisco's revenue, up 5% to $7.545 billion. And services revenue was $3.236 billion, up 3%.

Subscriptions represented 65% of Cisco's revenue in the quarter, up 9 points year-over-year, compared with one-time sales, representing 35% of revenue, down 9 points. Cisco sees recurring subscriptions as healthier business than one-time sales.

Other than that 13% slump in the service provider business, Cisco's other sectors were healthy. Enterprise grew 9%, public sector grew 10%, and the sector Cisco calls "commercial," representing small and medium-sized businesses, grew 5%.

As US trade wars heat up, Cisco has been reducing its exposure to tariffs; while the company does some manufacturing in China, it says it has greatly reduced its supply chain exposure. Tariffs are included in the company's guidance for future results. Robbins acknowledged the uncertain geopolitical environment more than once on Wednesday's earnings call, and says he has no greater insight into the future than anyone else. And, indeed, even as the call was under way, news alerts went out that President Trump signed an executive order clearing the way for a total Huawei ban in the US.

Cisco is not alone in seeing service provider business decline. Juniper cited that same factor in its lackluster earnings in the most recent quarter. Similarly, Nokia pointed to slow 5G revenues as it reported a slump. Ericsson, on the other hand, is going gangbusters. And Huawei's revenue jumped, lifted by both 5G and consumer devices.