Wall Street analysts at MoffettNathanson released a chart this week that gets straight to the heart of the 5G push. Citing data from CTIA, the main trade association for the US wireless industry, the chart shows dramatic increases in traffic across wireless networks but a slight decline in the money that wireless network operators are getting from their customers for carrying that traffic. 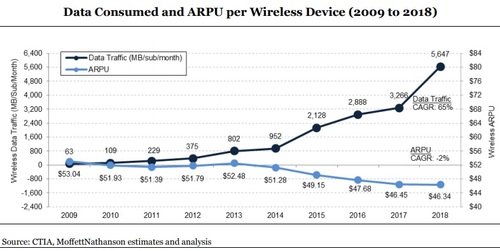 While operators like Verizon and policymakers like FCC Chairman Ajit Pai promise that 5G will usher in a revolutionary new age of connectivity, the coarser truth is that it's also a chance for telecom players around the world to boost sales, revenues and, potentially, profits.

While none of this is a secret, or a surprise, there is one big mystery that still remains: How exactly are 5G providers going to make money on this thing?

The conclusion among analysts is that it's not going to be easy.

"The consensus view -- it will be hard to monetize 5G -- is hard to refute unless telcos execute on new revenue opportunities and cost efficiencies," wrote the Wall Street analysts Bank of America Merrill Lynch in a 134-page report on 5G that they released last month to their subscribers.

"The carriers have failed at extracting additional revenue from additional data consumption," noted the analysts at MoffettNathanson in a recent research note on Verizon. "This cautionary reminder must necessarily inform any serious discussion of the path to 5G. Deploying 5G networks with enough density to meet expectations for blazing fast 5G speeds will cost real money. If not from charging more for using more, then where will the money come from?"

And the Electronic Frontier Foundation -- a nonprofit charged with "defending civil liberties in the digital world" -- recently wrote that it's actually boring old fiber wires, not fancy 5G networks, that will be the "superior medium for 21st century broadband."

"While 5G is a promising upgrade over 4G, long-range wireless broadband cannot outperform fiber as a last-mile link to homes and businesses," wrote EFF's Bennett Cyphers in a report on the organization's site. "In highly populated areas, mmWave [millimeter-wave] 5G will be a supplement to, not a replacement for, fiber-to-the-home."

5G for regular folks
Of course, it's easy to throw shade at 5G, given that it's going to be expensive to roll out (carriers will need to buy more spectrum and more cell towers) and given that the smartphone market is definitely cooling.

Verizon so far is the only US wireless network operator that believes regular customers should pay more for 5G. Whereas T-Mobile and Sprint have simply baked 5G into their existing plans, Verizon is slowly but surely moving to put a $10/month premium on access to its 5G network. AT&T might do something similar when it actually starts selling 5G to regular people -- incredibly, AT&T continues to claim that it's the "first" to launch 5G while concurrently preventing normal customers from actually buying it. (Let's just ignore AT&T's "5G E.")

But that's just the consumer side of 5G. Telecom executives across the globe have been arguing for years that it's actually the business side of the market that will generate the bulk of the near-term 5G opportunity.

And here's where things get a little more interesting.

B2B 5G FTW?
In text lingo it would be "business-to-business 5G for the win," and some analysts might well agree.

"B2B is where 5G could open new avenues of growth. 5G capabilities, especially on latency, will enable new applications in a number of verticals including automotive, energy or smart cities," wrote the Bank of America Merrill Lynch analysts in their report, estimating 5G will generate $77 billion of potential incremental revenue by 2024 for the global mobile industry. 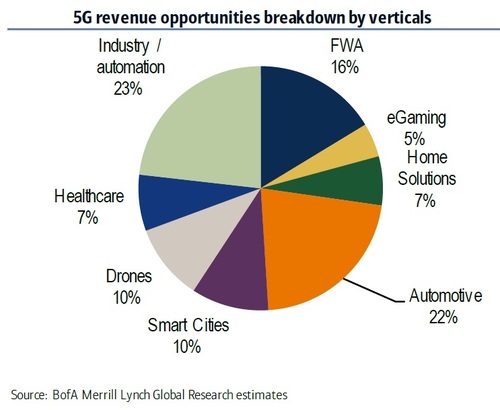 Perhaps more importantly, the Bank of America Merrill Lynch analysts offered a full and clear breakout of where exactly they see 5G revenues coming from, both in the consumer and enterprise space: 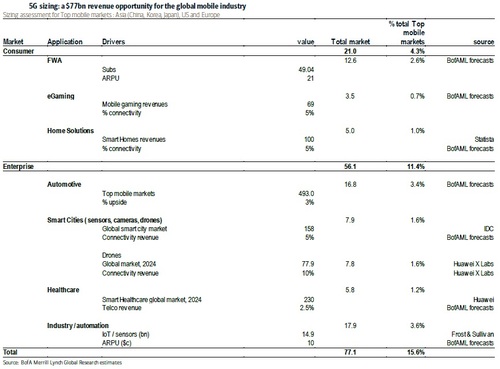 Of course, the Bank of America Merrill Lynch analysts aren't the only ones working to dive into the 5G enterprise revenue situation for operators. For example, the analysts at Gartner this week also took a deep dive into the topic, and found that it's actually outdoor surveillance cameras that represent the biggest near-term opportunity in 5G, given the gadgets' need for high-bandwidth connections and the fact that they don't move around much.

"Cameras deployed by city operators or used to ensure building security and provide intruder detection offer the largest addressable market" for enterprise-type 5G deployments, wrote Gartner analyst Stephanie Baghdassarian in a release from the firm. (Gartner uses the "5G Internet of Things solutions" moniker in its report, but the firm's categories -- ranging from emergency services to connected cars -- roughly line up with most other enterprise-type verticals for 5G.) 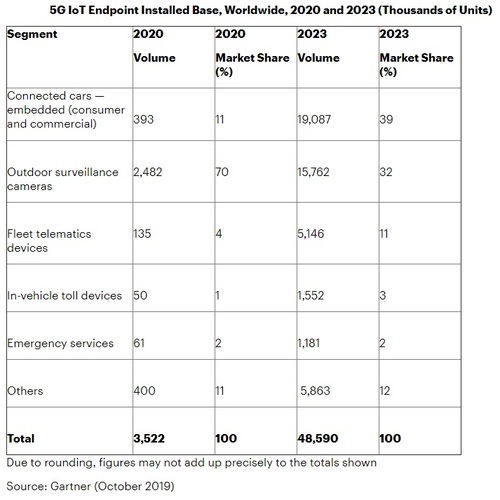 Gartner predicted that 5G outdoor surveillance cameras will lead the space by growing from 2.5 million units globally next year to 11.2 million units in 2022, and then will be surpassed by 5G connected cars in 2023. (It's worth pointing out here that China is the likely driver of this near-term opportunity given the country's well-documented embrace of government surveillance and its big 5G push.)

Skepticism abounds
Amid these somewhat rosy B2B outlooks, some analysts continue to wonder exactly how the 5G enterprise opportunity will play out -- and exactly which companies will profit. For example, the analysts at MoffettNathanson looked at a handful of 5G enterprise scenarios, from connected factories to connected cars, and came away with more questions than answers.

"Yes, of course factories will be connected. But will carriers be part of the equation?" they wrote in their recent report. "Its hard to envision a future where each machine would be individually connected to the public wireless network. Instead, wont manufacturers operate proprietary closed (private) networks, for reasons of cost, control, and security?"

They concluded: "Yes, this will be a real business, but for equipment providers, and for system integrators and installers, not for carriers."

The analysts also took a look at the autonomous automobile opportunity in 5G, noting that it would be "insane" to make life-and-death functions like steering and braking dependent on any kind of wireless network that might not be available in rural areas.

"We arent remotely suggesting that 5G isnt real, or that there wont be any applications that demand it," they wrote. "But we are saying that many of the applications we hear about most often dont make sense. Well need to identity more, and more lucrative, use cases before full-scale deployment of 5G infrastructure (at the requisite densities) can be underwritten. But in a classic chicken-and-egg scenario, until the network is built, those applications will probably be slow to develop. And until they develop, the business case for rapidly building the network will be in doubt slowing deployment. "

As 2019 meanders to a close, wireless network operators in the US and elsewhere do indeed have shiny, new 5G networks to show their investors. But whether they will continue to invest in those networks, and whether those networks will create real opportunities, in either the consumer or enterprise markets, remains to be seen.

DJF5 10/22/2019 | 4:08:38 PM
5G Revenues in Cell Towers How do these projections factor into Cell Tower owner revenues?  Outside of increased lease amounts, are there more vendors needing space.  Do areas such as Dish Network or any of the Healthcare and Banking areas need physical space on towers.  As the media giants buy each other out, the need to expand my tenents becomes the focal point of future business for me.  i was just curious of the impacts of 5G.
Reply | Post Message | MESSAGES LIST | START A BOARD

Thaddeus17 10/18/2019 | 12:56:54 PM
Great synthesis of many data points @Mike Dano: Great job pulling together many data points and presenting a frame around enterprise revenue growth opportunities for the CSP's.  Surprising that Merrill Lynch estimates 55% of 5G enterprise market will be in manufacturing and automtove.  Nice work on the information.
Reply | Post Message | MESSAGES LIST | START A BOARD

Jim P 10/18/2019 | 9:56:01 AM
Not sexy, but... Why wouldn't Verizon use their 5G capacity in Houston, Los Angeles, Denver, Miami suburbs to offset the $75-150/ month per circuit costs they incur for each enterprise last mile connectivity circuit?  It would certainly make the SD WAN product more elastic/ competitive (vs DSL or even cable modem) and, while not a leading use case, would certainly provide lower opex (higher EBITDAs).  They do not publicly disclose their annual spending on special access circuits, but I think it's safe to assume they could take $400-500 million out of 3rd party opex annually and likely improve their competitive standing.

Not good for CenturyLink or Spectrum/ Comcast, but a backstop for sure for Verizon Business.

Instead, Operators who have successful FWA business are all using n40/n41/n77.

Actually, FWA is still a B2C use case, not a real B2B one.

Scarter947 10/17/2019 | 5:09:55 PM
Re: Verizon 5G Home Relaunch - 2019? Thanks as to your question "How exactly are 5G providers going to make money on this thing?" I believe Fixed Wireless Access is the lowest hanging fruit especially with Millenials and how they access content.  Maybe we'll learn more at MWC in LA next week.  Cheers!
Reply | Post Message | MESSAGES LIST | START A BOARD

Mike Dano 10/17/2019 | 4:43:25 PM
Re: Verizon 5G Home Relaunch - 2019? Great question, and one that I have wondered myself frankly. I honestly don't know. Maybe they'll relaunch in the locations that don't need the extended range from the chip, and then expand next year into the locations that need it, when it's available?
Reply | Post Message | MESSAGES LIST | START A BOARD

Scarter947 10/17/2019 | 4:37:46 PM
Verizon 5G Home Relaunch - 2019? As you stated, Verizon has committed to re-launch 5G Home service by the end of 2019.  Qualcomm has announced their X55 Snapdragon chip and improved antennas which will be commercially available in 2020.  That indicates that Verizon's relaunch will be with another "temporary" solution/CPE equipment until the X55 is incorporated.  I realize that companies can't continue to wait on technology to launch services, but do you think this will be another test launch of 5G Home?  Going from a 5G proprietary device to a 5G NR X50 chip to a 5G NR X55 chip in a manner of 18 months comes with increased costs.  Or do you believe the launch in 2019 will accelerate with a X55 chip?
Reply | Post Message | MESSAGES LIST | START A BOARD
EDUCATIONAL RESOURCES