LAS VEGAS -- CES 2019 -- Charter Communications CEO Tom Rutledge might want to pay a visit to the trademark office if he's serious about his idea behind the "6G" network of the future. (See Don't Laugh, Charter Is Testing '6G' Wireless.)

In a discussion about what the potential attributes and needs for a future 6G mobile network, panelists here held an illuminating discussion about how quantum computing might fit the bill when the limits of performance and capabilities of today's networks hit a wall ... some day. (See CES 2019: IBM CEO Touts 'What's Next' for Data, Computing and IBM's Ginni Rometty: We're the Blockchain & Quantum Computing Leader.)

As a possible successor to today's binary networks that use ones and zeros that go on and off and need to be sequenced and resequenced, the broad idea behind Quantum computing is to have both of those states occurring at the same time. That, in turn, can enable much more data to be sent along with much improved accuracy, performance, reliability and security.

"If we want to go to Mars, we need it," Derek Peterson, CTO of Boingo Wireless Inc. , said of Quantum computing, citing a somewhat extreme-seeming scenario for when and if we'll need to ring up Elon Musk on his hoped-for, future home on the Red Planet. But the issue there is that it's not possible to communicate back and forth over such long distances efficiently using today's technology.

Back here on Earth, Quantum computing, still in its infancy, is about being ready for the day (and that day isn't imminent) when current technology and the limits of silicon geometries and Moore's Law run their course, Michael Beesley, CTO of service provider network at Cisco Systems Inc. (Nasdaq: CSCO), explained. 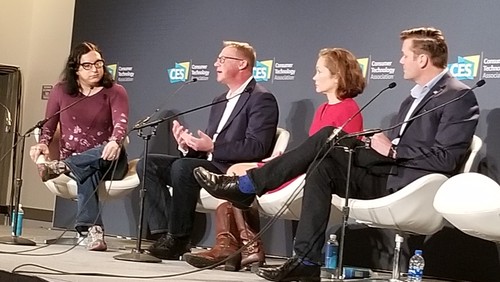 Beesley stressed that the limit isn't about to be reached any time soon, but did see the nascent days of Quantum-powered, 6G coming about as 5G networks begin to get rolled out. Quantum computing will go beyond those physical limits and "reset the technological framework" as "everything is getting connected... Everything," Beesley said.

Quantum computing will also give the industry a chance to "rethink" security, Peterson said, noting that its approach with the qubit, the building block of the technology, can tell you where it came from and where it's going.

And it positions players for a fully authenticated, "intent-driven" network that has the smarts of whether a transaction has a malicious or benign aim. "That solves an awful, awful lot," Beesley said.

And a new way of doing things could pave the way for some wrongs to be righted with respect to security and privacy occurring on today's Internet. With a clean slate, it could be possible to fix the mistakes of the past knowing what we know now. "I think the opportunity there [with quantum computing] is there's no protocols for the quantum Internet," Megan Stifel, cybersecurity policy director at Public Knowledge , said.

A next-generation approach will also put a greater emphasis of "identity" and what devices should have identities and who is responsible. That's going to be important as the IoT era explodes and identity isn't just about individuals, their phones, or their houses. It's drilling down to other layers, such as connected lights, doorbells, garage doors, locks, and even chips and monitors that are implanted into human beings. Does each need to have an identity and, if so, how do those interact with other identities and how are those interactions going to be governed?

Having that kind of foresight is a symbolic failure of today's networks that could be rectified, Peterson said, wondering if a chip implanted in his hand should have its own identity and share that identity and the monitoring data it is generating with only those authorized to see it (like him and his doctor, for instance).

The panel also dug into the geo-politics of quantum computing and the worldly resources of brainpower and money required to truly bring the technology to fruition. The depth and breadth of the technology and systems that will need to be developed will require a global effort, despite the ever-shifting trade tensions occurring between nations like the US and China. (See Trump to Ban Huawei, ZTE in US in January?)

"It is going to be a globally-driven technology and benefit from a globally-driven ecosystem. The scale of it is unfathomable," Beesley said, citing areas spanning supply chains, manufacturing and software stacks that will need to be developed over the years. "We'll solve all of these challenges, but it will be a [global] at-scale effort."