Cellnex has become Europe's hottest mobile infrastructure neutral host following an eight-month acquisition blitz that saw it spend more than 6.4 billion (US$7.16 billion) to pick up new assets in seven countries, a move spurred by the potential new business that 5G network coverage and capacity expansion plans will bring.

The latest deal sees the company -- which hosts and manages radio access network gear on behalf of multiple mobile operators in Spain, Italy, the Netherlands, France, Switzerland, the UK and Ireland (including planned sites up to 2027)  enter Portugal for the first time.

Omtel operates about 3,000 passive mobile infrastructure sites (60% towers, 40% rooftops) across Portugal -- about 25% of the country's total mobile tower sites -- and has plans to build out a further 400 sites during the next four years. Its main customer is MEO, Altice Europe's Portuguese operation: As part of the acquisition deal, Cellnex and MEO have struck a long-term deal that includes the construction of up to 350 further sites to meet MEO's needs.

Cellnex is counting on scale and 5G to provide a return on its recent significant investments: 5G will, the company hopes, "require network densification and an efficient roll-out that should allow a neutral and independent operator like Cellnex to propose an attractive solution to mobile operators both in terms of cost and speed of execution."

5G-driven spending spree
The expectation that 5G will drive significant new business for neutral hosts has led to a number of other acquisitions by Cellnex during the past year, helped by the desire of mobile operators to raise cash and focus their operations by offloading their mobile tower assets:

Previously, in 2017, Cellnex had acquired more than 2,000 sites in Switzerland from Sunrise for about $514 million and struck a $921 million buy-and-build deal covering 3,000 sites with Bouygues Telecom in France.

In November the company -- which also manages inbuilding small cells, provides hosted infrastructure for broadcasters, and runs emergency service networks and smart city/IoT infrastructure -- announced revenues of 753 million ($842 million), EBITDA of 498 million ($557 million) and an operating profit of 131 million ($147 million) for the nine months to the end of September. About 67% of its revenues come from the provision of telecom infrastructure services to mobile operators. Its net debt at the end of September stood at 3.4 billion ($3.8 billion).

Cellnex says the Omtel deal will add about 90 million ($101 million) to its annual earnings before interest, tax, depreciation and amortization (EBITDA) once the Portuguese operation is fully integrated and planned extra sites are built.

But a number of its recent acquisitions are yet to close, and the company likes to talk about the total number of sites it will have once all its deals are completed and the contracted and agreed site expansions have been built out, because that number is much bigger -- about 58,000 in total, including the Portuguese sites, as the graphic below shows. 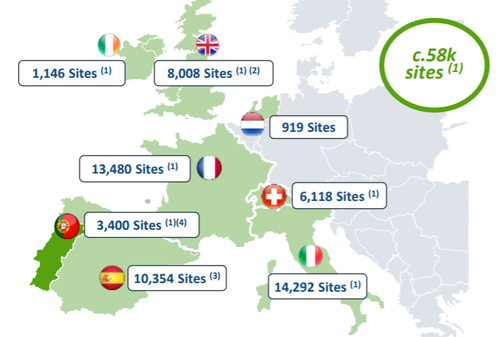 And once all its deals are completed, Cellnex expects its annual revenues to be around 2.2 billion ($2.46 billion), of which an estimated 85% will come from telecom infrastructure services, making it the largest independent mobile towers company in Europe.

Investors are keen on Cellnex's strategy: Its share price has doubled in the past year (see below) and currently stands at 40.44, giving it a market value of more than 15.5 billion ($17.3 billion). 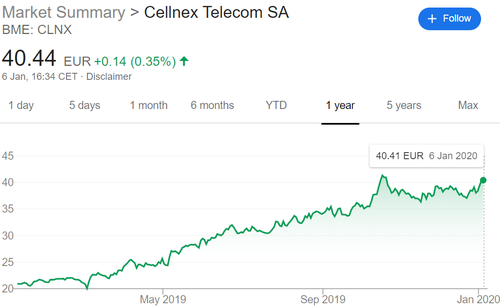 ReginBrown 3/25/2020 | 5:58:22 AM
Good A leading market of the world is opened for the sale and purchase for all customers. Nomination of the element and is accessed for the format for the citizens. Turn is held for the fastened elements. Path is ensured for humans. the feeble count is opened for the youngsters.
Reply | Post Message | MESSAGES LIST | START A BOARD
EDUCATIONAL RESOURCES