EE, the mobile part of UK telecom giant BT, became the first of the country's four network operators to launch 5G in May, when it switched on the new service in six of the nation's biggest cities. But if it gained an advantage, that was not obvious in the operator's latest six-month earnings: Anyone expecting to see a 5G boost would have been sorely disappointed when results came out today.

Despite 5G's availability for a full quarter in some of the busiest communities, BT's adjusted revenues for the half year to September dipped 2%, to £11.4 billion ($14.8 billion), and its adjusted EBITDA (earnings before interest, tax, depreciation and amortization) was down 3%, to £3.9 billion ($5.1 billion), compared with the year-earlier period.

At the consumer business, which today houses EE, second-quarter revenues fell £10 million ($13 million) year-on-year, to £2.644 billion ($3.42 billion), and first-half EBITDA fell 5%, to about £1.2 billion ($1.6 billion). BT, which no longer publishes details of customer numbers, said "5G results are in line with expectations." But average monthly revenue per customer at the important "post-paid" business fell 5% year-on-year in the second quarter, to £20.8 ($26.9). 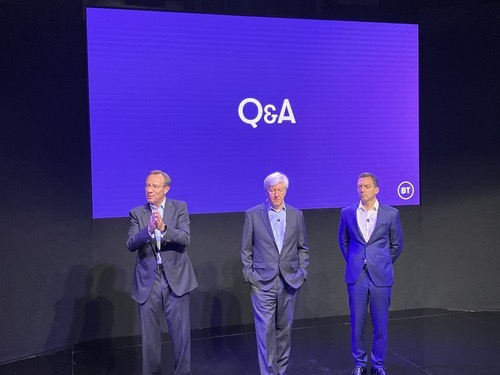 Nevertheless, BT remains confident that 5G services will reach 25 towns by the end of this calendar year, up from 20 today. Managers also insist they are on track to bring full-fiber networks to 4 million premises by March 2021. Those reached 1.81 million premises at the end of March, and BT says it is currently passing 23,000 new properties every week. But to reach the 4 million target, it will obviously need to do better, hitting more than 28,000 per week. A longer-term objective to extend full-fiber networks to 15 million properties -- which demands that regulators play nicely -- will force BT to look hard at how it can support an increase in capex, CEO Philip Jansen told analysts on a call today.

Executives made the fair point that 5G is still nascent, with limited coverage and few handsets. Moreover, where it is available, EE's 5G network has scored highly in recent comparisons by third-party analyst firms. "You can't advertise yourself to a great network," said Marc Allera, the CEO of BT's consumer business, in a dig at the recent marketing push by Vodafone, BT's most aggressive 5G rival.

Yet pricing pressure is a worry for the UK incumbent. Its current strategy is to price 5G at a slight premium to older mobile services, and managers are optimistic consumers will pay extra for a high-quality service. That approach could swiftly change, however, if there is any aggressive pricing by competitors. "I can't predict what other people will do," said Jansen. "If there is irrational pricing, we will respond." Quizzed about market share developments, he would say only that BT is in "reasonable shape" on execution. In both broadband and 5G, pricing is BT's "single biggest uncertainty" in the next year, he said.

All this makes cost discipline even more important. BT is nearly halfway through a plan to cut 13,000 managerial and back-office jobs, having shed 6,200 employees in the last 18 months. That has led to annual savings of £1.1 billion ($1.4 billion), against a £1.5 billion ($1.9 billion) target when the program is finished. But these are gross amounts, executives acknowledged today. Recruitment in other areas means BT's workforce is only about 1,300 employees smaller than it was two years ago, with exactly 105,026 staff members in September, according to results. Analyst consensus is for a net cost reduction of just £200 million ($259 million) over the next two years.

Jansen hinted at efforts beyond the current £1.5 billion ($1.9 billion) plan. "We need to find a way of putting in new systems and processes that take out unnecessary manual intervention and automate and digitize as much as we can," he said. But Simon Louth, BT's chief financial offer, ruled out setting any target for a net savings reduction, saying this could limit BT's ability to make investments. Recruiting engineers for the ambitious fiber rollout means the net headcount reduction may not be "quite as great," he said.

Right now, BT is in negotiations with policymakers about wholesale terms that will guarantee a decent rate of return for shareholders on a fiber investment. Yet emerging infrastructure-based competition will maintain the pressure on wholesale prices. On the retail side, meanwhile, consumer and business spending has not risen significantly (if at all) with the rollout of higher-speed services, and nearly everyone today has a broadband service. BT's only way of gaining customers is to grow its market share.

In short, the operator may be facing a substantial increase in capital expenditure and a rise in operating costs with no real prospect of revenue growth. Already, it looks obscenely bloated next to its peers, making about $280,000 in per-employee revenues last year compared with about $495,000 at Vodafone. Jansen sees a sales opportunity in the launch of new converged services, which package broadband, mobile and TV into one bill, under the new Halo brand. But the appetite for convergence looks weaker in the UK than elsewhere in Europe, according to Paolo Pescatore, an analyst with PP Foresight, and BT does not have any kind of unique proposition. Its TV offering, moreover, looks relatively weak.

For the time being, market sentiment is more positive than it has been in months. BT's share price rose 1.5% in early-afternoon trading in London, to about 205.10 pence sterling, and it has gained nearly 30% since August. But it has fallen a long way since 2015, when shares reached about 500 pence sterling in November that year. Under Jansen, BT has avoided the pitfalls and questionable strategic moves that brought down former CEO Gavin Patterson, who lavished billions on sports rights and was in charge when an accounting scandal in Italy came to light. It looks more competently managed and competitive. In today's telecom market, nobody expects much more.