AT&T will pay ATN International's Commnet Wireless $167.5 milion to build and maintain AT&T's wireless network in the Southwestern US. AT&T will use the network for its own commercial mobile services and for its public-safety offerings through FirstNet.

"Commnet will also provide ongoing site maintenance, which will include performing required maintenance for antenna and radio systems, power plant, transmission networks, backup generator and battery systems, responding to service requirements generated by AT&T to perform repairs or resolve customer-related issues, and performing other cell site physical plant maintenance and repair," ATN wrote in an SEC filing detailing the new agreement. "Commnet will provide these maintenance services for an initial term ten years from the effective date of the Agreement, with five successive three-year renewal terms unless either party gives written notice of non-renewal."

The analysts at Wall Street research firm Raymond James said that contract covers around $80 million in network construction costs over two years and around $88 million in maintenance over the next eight years. "We think the construction portion will be completed by 1Q21 to help AT&T meet its FirstNet buildout commitments," the analysts wrote in a note to investors. "We expect maintenance revenues to ramp over the next two years and then reach an annual run rate of $11M by 1Q21. Importantly, we view this contract as a stabilizer for the [ATN] U.S. Telecom business, which has faced continued headwinds in its legacy wholesale business, and removes the risk of AT&T overbuilding ATN or further pressuring roaming rates."

Commnet is one of several telecom businesses owned by ATN. Commnet operates a wireless network in extremely rural parts of the Southwest, and is essentially expanding AT&T's reach in the area using much of its own, existing wireless footprint.

Commnet Covers Areas in the Southwest US 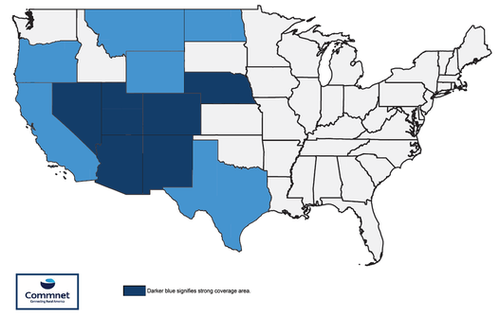 The AT&T-ATN transaction is noteworthy as wireless network operators rarely outsource the construction and maintenance of their networks to other network operators. However, AT&T's agreement with Commnet makes specific mention of FirstNet, a federal entity charged with building a nationwide wireless network for public-safety agencies including police and firefighters. AT&T is FirstNet's network partner, and has been charged with building FirstNet's 700MHz network nationwide. Public-safety users get first dibs on the network, but AT&T customers can use it when it's not being used by police and other first responders.

The agreement may be related to reported stipulations in the FirstNet-AT&T contract regarding the use of rural partners.

During its recent earnings call with investors, AT&T executives crowed of the company's work with FirstNet. "FirstNet is just in its infancy, and we have a few hundred subscribers that have moved to FirstNet. The first responder community is a rather large market, and its a market where we come into it with very small share," said AT&T's Randall Stephenson, according to a Seeking Alpha transcript of his remarks. "And so, our opportunity to grow share as we build out this First Responder Network is quite significant, and youre starting to see that play itself out. But that just as importantly is as we build out the FirstNet network, were moving into markets where we have had a pretty thin presence in the past. These are rural communities. And as we move into these communities, we are standing up brand new distribution in many communities. And everybody on this call, whos followed this business for a while knows what the penetration numbers look like when a new entrant comes into a community."

AT&T said it has so far build 60% of FirstNet's nationwide network, and expects to hit the 70% milestone by the end of this year. AT&T has said that it's employing a "one touch" network upgrade program, where its technicians install support for FirstNet's 700MHz as well as AT&T's AWS and WCS spectrum for 4G and 5G.

ATN's filings with the SEC on its new agreement with AT&T made no mention of what kind of network technology Commnet would support.