For anyone who wants the US and China to find a way around their current trade impasse, the last thing American hawks needed was another reason to eye Beijing warily. But they just got it. In a report out today, consulting company Deloitte says China has already established a massive lead over the US in 5G. Catching up may be "near impossible," Deloitte warns.

The US famously lagged in earlier generations of network technology, and yet its economy remained the biggest in the world. The difference this time, says Deloitte, is that 5G will connect all manner of objects to the Internet, and not just our smartphones and tablets. That will boost productivity and give rise to new services. "Accordingly, countries that adopt 5G first are expected to experience disproportionate gains in macroeconomic impact," says Deloitte.

One can imagine Senators Chuck Shumer and Marco Rubio sputtering over their breakfasts. Fierce critics of China, both have accused Chinese companies of intellectual property theft. That is partly why Shumer opposed lifting a recent ban on sales of US components to ZTE Corp. (Shenzhen: 000063; Hong Kong: 0763), China's second-largest maker of network equipment, after it was penalized for breaching US sanctions. Any suggestion ZTE and bigger rival Huawei Technologies Co. Ltd. are propelling China into a 5G lead will only serve to aggravate the hardliners. (See Senate Republicans Capitulate to Trump's ZTE Deal .)

It may also come as a surprise. Recent news headlines have focused on a monster 5G deal between T-Mobile US Inc. and Finnish vendor Nokia Corp. (NYSE: NOK), as well as efforts by AT&T Inc. (NYSE: T) and Verizon Communications Inc. (NYSE: VZ) to launch 5G services in the next few months. Both Nokia and Sweden's Ericsson AB (Nasdaq: ERIC) refer to spending activity in North America when trying to enthuse investors, and note the post-4G slowdown in China. (See Nokia Reels In $3.5B 5G Deal With T-Mobile US, Verizon Confirms Mobile 5G in 'Early' 2019, AT&T Expects Mobile 5G in 'Parts' of 12 Markets by Year's End, Ericsson Back in Profit After Fierce Cuts & 5G Action and Profits Crash at Nokia's Networks Biz.)

Nor does China appear to be in a great hurry to launch 5G services ahead of its regional and global rivals. "There will be a couple of waves depending on the spectrum awarded," said Nokia CEO Rajeev Suri when commenting on 5G rollout during a recent earnings call. "South Korea will happen later this year and then you will have Japan starting at some point in the first quarter of next year followed by China around the end of Q2 or in Q3 next year."

Falling short
But a sprinkling of 5G in big US cities does not equal a revolutionary new technology. While US operators spout marketing rhetoric, and dream up buzz phrases like "5G Evolution," their Chinese peers have been quietly getting on with the job of laying sturdy foundations for the next-generation technology. Above all, this means investing in the additional sites 5G will need to support fast, low-latency services in high spectrum bands. After a wave of investment activity, China now has about 1.9 million mobile sites, according to Deloitte's research. The US has about 200,000.

China's sites lead has lengthened, too. Since 2015, it has outspent the US by around $24 billion, says Deloitte, and added another 350,000 sites. US companies have built fewer than 30,000. Seemingly overlooked until now, the Chinese spending boom appears to be the result of state activism with the creation of China Tower, an infrastructure firm in which each of China's three big service providers owns a stake. China Tower's site investments have totaled $17.7 billion since 2015. (See China Tower Plans $8.7B IPO in Hong Kong.)

The US, of course, has no such equivalent, and never will have. In January, a leaked US government report proposed "nationalizing" 5G with the deployment of a countrywide wholesale network open to all retail players. Such "single host" schemes have merit, as the China case shows, but are clearly anathema in the US. They could also be counterproductive, says Deloitte. "Such interventions  could risk disrupting a communications and technology ecosystem that has proven symbiotic and resilient over the past decade," its report concludes. (See Trump's 5G Plan Is Not as Bonkers as They Say.)

Instead, Deloitte advocates partnerships between operators and content partners to support investment activity. The subtext is that wealthy Internet companies should pay operators to carry services. Any such development, of course, would anger supporters of "net neutrality" -- the principle that all Internet traffic be treated equally and on non-discriminatory terms -- although it may be acceptable under new legislation. (See Net Neutrality Is Not a Rational Debate.)

Naysayers may argue that China needs more towers because it is much bigger, but the details of Deloitte's analysis are not encouraging. The US currently has only 4.7 sites per 10,000 people, against China's 14.1. For every 10 square miles, there are just 0.4 sites in the US, compared with 5.3 in China. 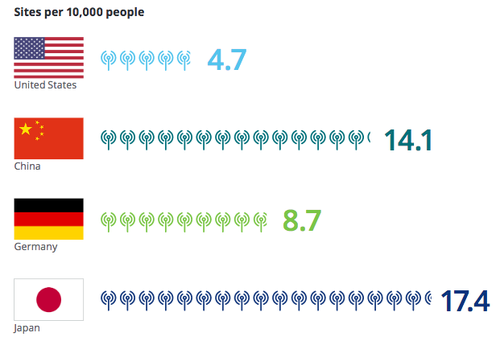 What's more, the US comes off badly when compared with other countries, too. Japan has a staggering 17.4 sites per 10,000 people, and 15.2 for every 10 square miles. Even Germany is ahead, despite the widespread perception of Europe as the world's 5G straggler. It has 8.7 sites per 10,000 people and 5.1 per 10 square miles. Nor is it standing still. Deutsche Telekom AG (NYSE: DT), the country's biggest operator, plans to build another 2,000 sites per year, having added 500 annually between 2014 and 2017. (See The US 5G 'Lead' Over Europe Is Bluster, DT to Splurge 12.5B in 2018 Capex as It Preps for 5G and Europe's Telecom Sector Is Not Perfect, but It's Less Rotten Than America's.)

A US merger between T-Mobile and Sprint Corp. (NYSE: S) is not auspicious, contrary to what the companies claim. It is unclear how any weakening of infrastructure-based competition, in what is already a market dominated by giants, would spur investment activity. State capitalism is the answer to this problem of market concentration in China, but not an option in Western democracies. (See T-Mobile & Sprint: Marriage made in hell.)

The real uncertainty is whether 5G will live up to its promise. Deloitte's authors have made up their minds that any benefits will not accrue to network operators, which could explain the limited appetite for spending. But they are pretty adamant 5G will be a success story for other industries. Plenty of observers still have their doubts the technology will be as economically vital as proponents insist. To US policymakers, that is unlikely to be an acceptable excuse for inaction. (See 5G Still More Like Rocket Fuel Than a Mission to Mars.)

uaetechnician 8/20/2018 | 4:32:56 AM
5G race Yeah, Japan is winning the race. and the real competition is between the techno giant countries for the network. and hope people will always surprised with the technology.

kq4ym 8/17/2018 | 7:48:58 PM
Re: OBvious It does seem as noted that if these numbers are correct and that the number of site matters, the fact that " China now has about 1.9 million mobile sites, according to Deloitte's research. The US has about 200,000" would seem to be a foreshadowoing of what's going to be the future numbers as well. But who knows.
Reply | Post Message | MESSAGES LIST | START A BOARD

R Clark 8/8/2018 | 2:43:33 AM
Not how 5G will get adopted Yes, cellsite numbers are a really crude metric. Obviously, cellsite density is much higher in east Asian cities than anywhere else in the world because of the population density. You can't get that in suburban America. In Seoul, Tokyo, Beijing, Shanghai, Hong Kong you've also got huge amount of fibre and widespread use of Cloud RAN/baseband hotel, which makes it incredibly quick and easy to set up new cellsites, hence the elevated number of cells.

The other point Deloitte miss is the way 5G gets adopted. Even with a lot of cellsites, it's going to be a slow and steady rollout in every country, regardless of who is 'first'.

The other part is industrial/commercial side of 5G, which is the big new development. That will depend as much on enterprise demand and innovation as on network availability. China's doing great on the network, but its economy is full of stodgy SOEs and inefficient firms who aren't great users of tech. So the network side of 5G is just one part, and the 'winner' of the 5G race will be the one that can make use of the new capability, not the one that's first to deploy.

James_B_Crawshaw 8/7/2018 | 4:51:30 PM
Re: And? We can hardly say that the US is losing the 5G race because of existing site density or anything else. Not all of the specs are ready, as Dan points out, and there aren't any consumer devices yet - see Dan's article for the device timeline.

Is there even a race? Sure, vendors would like a race. And maybe some of the operators think they can get some kudos by being first to market. But does the consumer care?

Did the US economy suffer from being laggard in 2G and 3G mobile and has it had a noticeable impact on the economy, relative to other countries, since 4G was launched?

How does that site density relate to the actual connectivity experience in US, China, Germany and Japan?

This study from STL Partners suggests Japan has the best mobile app experience with a score of 78/100, Germany comes 7th with 53, USA comes 10th with 44 and China comes 14th with 35.

So site density and experience do seem to be correlated though China is the exception with higher density than Germany but worse app experience than USA. Perhaps letting the private sector decide where to put cell sites is more efficient than letting the state decide. Who knew?

DanJones 8/7/2018 | 1:15:26 PM
Re: Tower Companies No, I think that's right, a lot of the high-band has to be small cells not sites. in fact, this report appears to assume that 3.5GHz (aka China) spec 5G will deliver good coverage out of the box on macro sites and that ain't necesarily so, as we've seen with 2.5Ghz 4G.

It also (not the intention, surely) helps validate the T-Mobile/Sprint 600MHz 5G plan. T-Mobile has 997 "5G-ready" 600MHz live on 4G already. 600MHz does provide 5G coverage over a longer range and then they can go an backfill mid-band and high-band small cells for speed.
Reply | Post Message | MESSAGES LIST | START A BOARD

what are the consequences?

Carol Wilson 8/7/2018 | 11:42:30 AM
Re: Tower Companies I just finished writing something -- it will be posted this afternoon -- about what tower companies are doing in the edge compute space.

That doesn't directly address 5G infrastructure because it is obviously much more dense than just towers. The folks I talk to say they are building other infra - small cells, DAS, etc. - but I didn't push them on pace because I was narrowly focused on edge compute.

It seems like if there was a clear signal from the wireless carriers on what they want and what they are willing to pay for it, that it wouldn't be likely wireless infrastructure companies would be the hold-up.