With MWC Americas now up and running, and seemingly buzzing, the 5G announcement floodgates have opened, with all manner of vendors and their operator friends whipping up a next-generation mobile standard frenzy and cranking the volume up to 11. (See MWC Americas Day 1 Recap .)

There's already been some 5G action this week, of course. (See Sprint Says Massive MIMO, Coming in 2018, Is the Bridge to 5G and Charter Reveals New Details on 4G/5G Trials.)

But there's so much more where that came from. Here are some of the more notable recent 5G blurts: 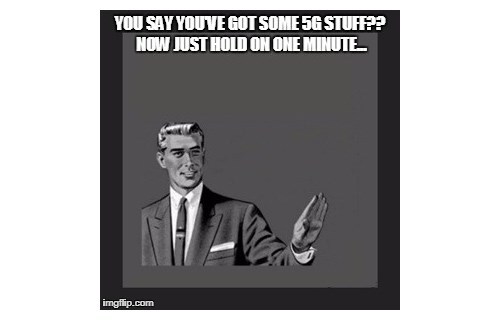 Learn more about the fronthaul and backhaul options for 4G and 5G deployments at Light Reading's 5G Transport & Networking Strategies event in New York on November 10, 2017.

[email protected] 9/14/2017 | 9:13:55 AM
Re: When I Can Get It 5G networking technology will be here before we know it, but the services that 5G will enable will be dependent on things other than wireless/mobile tech -- edge computing/distributed cloud will be the enabler, IMHO.
Reply | Post Message | MESSAGES LIST | START A BOARD

That way, I'll be able to wear a VR headset all of the time.
Reply | Post Message | MESSAGES LIST | START A BOARD
EDUCATIONAL RESOURCES