As we move into the second half of 2019, it's time to assess the progress of 5G globally. And according to the Global mobile Suppliers Association (GSA), things are looking pretty good.

The firm reported that, at the close of the second quarter, there were a total of 1.398 million 5G subscriptions globally, representing 0.016% of the entire global mobile market. South Korea undoubtedly contributed much of that total. Indeed, almost 2 million mobile users in South Korea signed up for 5G services in the first four months of their availability, according to statistics released just a few days ago by the country's Ministry of Science and ICT.

But the US probably didn't contribute much to the GSA's 5G count. According to BayStreet Research, US wireless network operators sold just 29,000 5G devices by the end of the second quarter.

Of course, 4G still dominates the global mobile market. The GSA reported that, at the end of the second quarter of 2019, there were nearly 4.7 billion LTE subscriptions worldwide. The firm found that LTE connections recently surpassed all other types of mobile connections (2G and 3G, for example) globally: 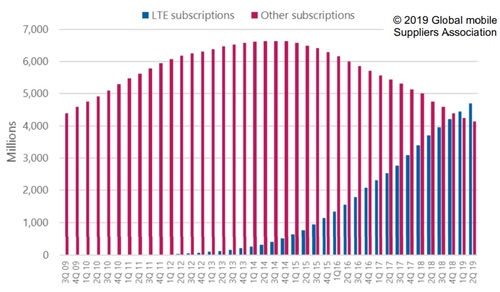 5G devices
The GSA reported that, in the first eight months of 2019, the number of announced 5G devices grew rapidly -- rising to 129 5G devices as of Sept. 10, from 100 just last month. However, it's important to point out that announced devices may not necessarily become commercialized devices. And even if they are released commercially, they may not be widely available. Further, the GSA's figures exclude regional variants and prototypes not expected to be commercialized.

Nonetheless, it's worth taking stock of the GSA's 5G device count, which covers a total of 15 different form factors:

Finally, the GSA counted four vendors -- Huawei, Mediatek, Qualcomm and Samsung -- that have announced 5G chipsets that are being used or are scheduled to be used within devices.