Ericsson reported a 10% year-on-year increase in total revenues to 54.8 billion Swedish kronor (US$5.83 billion) for its second quarter fueled by demand for 4G and 5G network products, particularly in North America and across Asia. On a purely organic basis, accounting for changes in currency exchange rates and reporting only comparable business units, revenues were up by 7% compared with a year ago.

The vendor also reported a much improved operating margin of 6.8%, compared with 0.3% a year ago, and a net profit of SEK 1.8 billion ($192 million), compared with a net loss of the same amount a year ago. The full results announcement can be seen here.

And it's boasting involvement in 15 live 5G networks across four continents, which is about two thirds of all current 5G launches.

CEO Börje Ekholm, who is focused on making Ericsson an increasingly profitable company that is the leader in terms of network technology capabilities, believes the company is showing "underlying growth in our business." There are challenges, of course, but the company is heading in the right direction, he feels.

However, there are trends that are making investors and analysts nervous.

While the Networks division, which generates about 69% of total sales, is reporting improved revenues, its margins are being eroded currently (on a sequential basis) as Ericsson strikes what it calls "strategic contracts." These are deals that Ericsson is very keen to secure so it can improve its market share, Fredrik Jejdling, head of the vendor's Networks division, tells Light Reading. Market share had dipped a few years ago, so part of the current strategy is to improve that metric, which in turn also brings economies of scale.

These so-called strategic contracts can be deals that expand Ericsson's business with existing customers, or be contracts with new customers: However, the vendor isn't disclosing further details about the nature of these contracts, the number of such deals being struck or exactly why the margins are lower in the early phases (a range of reasons that differ from contract to contract, according to the head of Networks).

What Jejdling did stress, though, is that these contracts will continue to put pressure on the Networks division's margins through the rest of 2019 but that the deals are designed to be profitable in the long term, as well as improving market share. He stressed that Ericsson is not seeking a price war with key 4G/5G rivals Huawei and Nokia and is not going to agree to deals that are not designed to be ultimately profitable.

Currently, though, these strategic contracts are negatively impacting the Networks division's margins on a sequential basis (as seen in the chart below -- compare 19Q2 to 19Q1, when revenues increased but margins dipped): Margins were also hit in the second quarter by undisclosed costs associated with a license settlement agreement announced in June. 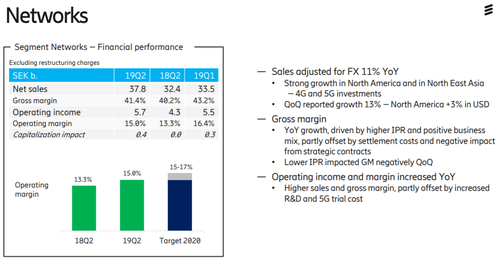 Meanwhile, Ericsson's other divisions are still works in progress.

The vendor's Digital Services division is still in turnaround mode as costs are cut and Ericsson renegotiates or exits 45 contracts deemed non-strategic -- it has so far "addressed" 27 of those contracts. That division is still losing money, reporting an operating loss of SEK 1.3 billion ($139 million) for the second quarter.

Its Managed Services division has also been exiting contracts and investing in new capabilities (AI, automation) designed to deliver gains in the long term, leading to lower year-on-year sales and lower margins, though it is still turning a small operating profit of about SEK200 million ($21 million).

And the Emerging Business & Other division, which includes units such as Red Bee Media and iconectiv, is small and unprofitable, reporting an operating loss of SEK700 million ($75 million) for the second quarter, though the Ericsson team is keen to point out that iconectiv, which provides a broad range of interconnection solutions and services, including number portability operations, is profitable.

Combined, those trends have made investors nervous: Ericsson's share price is down 6.44% in early Wednesday trading on the Stockholm exchange to SEK84.44. Despite that, the stock 9.4% up this year and is up by 25.2% compared with a year ago.

Long-term view
Those longer-view stock trends seem to be more reflective of Ericsson's progress as a company. While the licensing agreement settlement that impacted the Networks division margins is a one-off item, the other trends are not new and shouldn't be a surprise: The turnaround stories at Digital Services and Managed Services have been tough and included some major setbacks for Ericsson in the past year, but these have been outlined in detail and CEO Börje Ekholm appears keen to be as transparent about the company's state of health and mind as he can.

With regards to the "strategic contracts," Ekholm noted during the previous quarter's earnings call that the vendor is signing "contracts that can challenge profitability initially but are attractive in the longer term  Those will come in the rest of the year more than in the first quarter but at the same time we are not saying we are falling off a cliff. It is a strategic imperative and we will continue to do that." He had prepared the market for what was coming.

So it was no surprise that Ekholm appeared to get slightly irritated during today's earnings call as analysts asked over again about the short-term margin impact of the major network deals and asked if the struggling divisions might soon be in better shape.

"It's not about the third quarter or the fourth quarter  this is about building a company that is significantly more profitable by 2025 -- we're not going to sacrifice anything to impact that [goal]. We are managing the overall situation and we will see gains in the long term -- we are very committed to and confident about our targets," noted the CEO.

Global affairs
And currently, it seems, achieving Ericsson's goals is not being helped, or hindered, by what is going on in the broader competitive market: The tensions between the US and China, and the resulting impact on Huawei, has not had any notable impact on investment decisions being made by network operators, the CEO noted.

That situation, though, has been a catalyst in driving changes to product manufacturing strategies: Ericsson recently announced a new facility in the US.

And what about China? The country recently awarded 5G licenses, but it's too early yet for major radio access network rollout deals to be awarded (though some related, preparatory core network deals have been awarded): Ekholm expects to have better visibility into the timing of 5G-related business from Chinese operators towards the end of the year, but he is hopeful that Ericsson can maintain the market share it has in 4G in a market that is dominated by Huawei and ZTE.

Also on the CEO's mind will be the investigation by the US Securities and Exchange Commission and the US Department of Justice into alleged corrupt practices by Ericsson staff that, at some point, will land the company with "material" financial penalties. There are no further updates on that process or the financial implications currently, but, as with other areas of Ericsson's business, Ekholm has given plenty of warning that something is coming down the pipe.