LONDON -- 5G World Summit -- Forthcoming 5G technology may replace fixed broadband for some of Telenor's Norwegian customers as the former state-owned monopoly switches off its copper networks in the next few years, it emerged today.

The Norwegian telco plans to switch off its last-mile copper networks by 2025, relying on a mixture of fiber and high-speed mobile technology to serve broadband customers.

It has already started trials of so-called "fixed wireless access" on its 4G infrastructure as it explores alternatives to the costly rollout of new fiber networks.

"We've started to test fixed wireless on 4G infrastructure because we are phasing out copper in 2025 and there are still two to three hundred thousand people using broadband on that," said Svendsen during a keynote presentation at the 5G World Summit in London. "We can also use fixed wireless to go into areas where fiber rollout is not profitable." 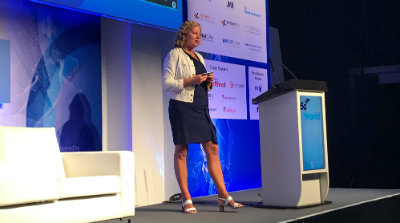 Using 5G could help to overcome some of the capacity concerns about relying on 4G as a fixed broadband substitute, according to Svendsen. Data usage on Telenor's mobile network is rising at an annual rate of between 50% and 60%, she told event attendees.

Telenor Group (Nasdaq: TELN) has now set up a 5G test zone in the city of Kongsberg, where it is conducting trials of 5G technology in various scenarios. In one of those, it is providing fixed wireless services to selected households along a three-kilometer stretch of road.

Fixed wireless access is typically associated with the US market, where Verizon Communications Inc. (NYSE: VZ) plans to run 5G over very high frequencies to support broadband connectivity in areas that are hard to serve with fiber. (See The Growing Pains of 5G.)

By taking advantage of spectrum in the 28GHz range, and other very high frequency bands, some operators believe they can provide the kind of gigabit-speed connectivity usually seen on last-mile fiber networks.

Fixed wireless access appears to hold greater relevance in Norway than many other parts of Europe because the Scandinavian country features numerous rural and isolated communities that are difficult to serve with fixed-line networks.

"If we get promising results [during trials] we can think about building out the RAN [radio access network] based on profitable use cases," said Svendsen. "Fiber is expensive to roll out everywhere and we've publicly stated we'll phase out copper in 2025, so we'll need complementary products when broadband users on copper don't have other alternatives."

While Telenor has already started to introduce 5G functionality in its core network, it is approaching the RAN more tentatively because of the costly investments that are required, Svendsen indicated.

Most of its "use cases," she said, are based on applications for business and public sector customers. In Kongsberg, they include trials of an "autonomous bus" as well as 5G connectivity between a local hospital and one in the capital city of Oslo, about 50 miles to the north east.

Telenor has worked mainly with China's Huawei Technologies Co. Ltd. in the 5G area so far. It claims to have realized peak 5G connection speeds of about 71 Gbit/s in a test environment.