Get ready for lots and lots and lots of 5G phones -- including some from iPhone maker Apple. However, exactly where those phones will be sold remains a bit of an open question.

The Wall Street analysts at research firm Nomura this week dramatically raised their expectations for 5G phone shipments, from just 172 million in 2021 to a whopping 402 million in 2021. The firm said it now believes 27% of all phones in 2021 will be 5G, a rollout pace similar to that of 4G.

Nomura's numbers dovetail with similar predictions from research and consulting firm Canalys, which said this week that phone makers will ship a total of 800 million 5G smartphones globally by 2023.

One of the main drivers for the massive numbers is China. The Chinese government recently issued 5G spectrum licenses, thereby paving the way for operators in the country to begin their 5G rollouts. And operators there are moving full steam ahead: China Mobile, for example, recently said it plans to offer 5G in 50 cities this year using 50,000 base stations.

As a result, Canalys predicts that Greater China will account for 34% of 5G smartphone shipments in 2023, followed by North America at 18.8% and Asia Pacific at 17.4%. That's not surprising considering China is home to 1.3 billion people. 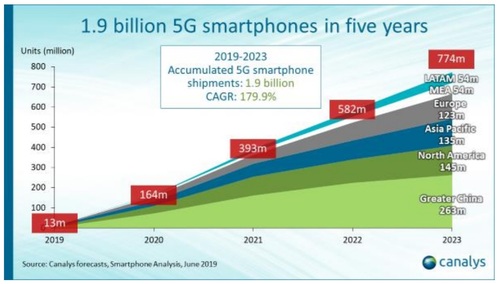 Now here's where the 5G phone story moves beyond simple market forecasts. In part due to China's 5G moves, Nomura's Instinet raised its shipment forecast for 5G iPhones. The firm previously expected Apple to build 35 million 5G iPhones in 2020, but now it believes Apple will release 60 million 5G iPhones in 2020. (It's worth noting though that Instinet, a Wall Street research firm, doesn't believe a 5G iPhone will significantly boost Apple's overall position in the market. "Our view holds that todays gigabit LTE download speeds of well above 100Mbps are sufficient for most consumers," wrote Instinet's Jeffrey Kvaal, adding that "our checks indicate US carriers do not intend to offer incentives on 5G handsets.")

Apple, of course, recently dropped Intel as its 5G chipset supplier in order to ink a massive, six-year deal with Qualcomm. The move was widely seen as a way for Apple to more quickly move into the 5G market.

Interestingly, the development has had a major impact on both Intel and Apple: For Intel, the company is reportedly selling thousands of 3G, 4G and 5G patents. And for Apple, the company appears set to increase its focus on profits and operations at the expense of aesthetics, following the departure of the iPhone maker's longtime designer Jony Ive.

Despite Apple's new deal with Qualcomm, the company is widely expected to be a latecomer to the 5G game, given that LG, Samsung, Motorola and others are already offering 5G products.

And Apple is nowhere to be found in China's initial 5G push. As Canalys analyst Mo Jia pointed out, Huawei, Oppo, Xiaomi and ZTE are supplying the initial 5G phones for China's 5G launch. "Apple will miss out, leaving loyal iPhone users waiting another year, which might risk them switching to aggressive competitors," Jia added.

Apple isn't facing an outright ban in China like its Chinese counterpart Huawei is in the US. Huawei -- now the world's second-largest smartphone maker behind Samsung and ahead of Apple -- faces a tacit ban in the US due to allegations that Huawei's products could be used to open a conduit for Chinese espionage, a claim that US security officials have been making since at least 2012.

However, that all might change based on President Trump's comments this week regarding Huawei and a possible agreement between the US and China on trade. Such an agreement could potentially pave the way for Huawei smartphones in the US -- a development that would represent a further challenge to Apple.

Thus, it's clear that the 5G phone market is picking up steam, but it's hard to say which companies will cash in on the opportunity.