Sensors Move to the Fore in the Internet of Bins

Trash management is a bright spot for cellular IoT and low-power wide area (LPWA) technologies in a market that isnt growing as fast as was hyped.

Analyst firm Berg Insight predicts that the global installed base of smart waste sensors will hit 1.5 million units by 2023, up from 379,000 units worldwide in 2018. These wirelessly enabled fill-level sensors can be installed in new bins, or integrated into existing trash units. The smart sensors can measure things like waste levels and the temperature inside the bins.

Cellular 2G, 3G and 4G standards have dominated the market for waste sensors so far, accounting for three-quarters of the worldwide installed base in 2018, according to Berg Insight. This is starting to change as low power wide area technologies such as narrowband IoT (NB-IoT) LTE and LoRa are getting established in the sector and will account for a 50% share of the market by 2023.

"LPWA technologies such as NB-IoT, LTE-M, LoRaWAN and Sigfox are however establishing themselves as attractive alternatives due to their lower power consumption  a feature that is essential for the performance of smart waste sensors as they are mainly battery-powered," Berg Insight noted in its press release last week.

The analyst firm said that US-based smart bin provider BigBelly Solar is currently the global market leader with a 13% market share worldwide. BigBelly trash bins have been spotted all across the states, and the company is working with carriers like Verizon.

Big Belly in the Wild 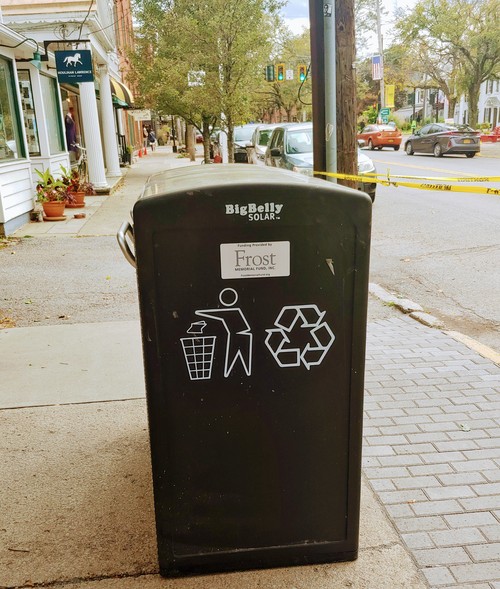 Why this matters Europe is currently the leading smart waste sensor market in the world, Berg Insights reports, but Asia and the rest of the world are expected to lead both the US and Europe by 2023, with nearly half a million sensors installed by 2023 in Asia-Pac.

Smart waste sensors will likely be a sweet spot for cellular NB-IoT providers, because the LTE standard can support long ten-year battery life spans, and the network can connect sensors deep in buildings and underground.

In fact, one of the first customers for T-Mobile's NB-IoT network in the US in July 2019 was Sensoneo, which installs and monitors smart sensors in dumpsters across California, Colorado and Ohio.

It looks like there may be gold -- at least for the early corporate and cellular adopters -- in the Internet of bins!