Emmett Fitch was an electrical engineering student home for the summer when he accidentally discovered the business that would alter the course of his professional life.

Fitch's home was Unalaska, Alaska, and Fitch's summer was supposed to be spent taking online classes. But he couldn't get online because Internet service in southwestern Alaska was so spotty.

Fitch never did get that electrical engineering degree, but he did manage to bring Internet service to Unalaska by bootstrapping an ISP called OptimERA. The tiny company spent years providing Internet service for one large business customer, and then decided to build a satellite-backhauled WiFi network in Dutch Harbor, Alaska. OptimERA deployed 1,000 access points, giving many people access to mobile data for the first time.

But a lot of Alaskans still couldnt make calls on their cellphones.

"Youve fixed the Internet, now fix the cellphone problem," was the message Fitch heard repeatedly from his customers.

"We had never intended to become a carrier," he said. "But somebody needed to do something. So we started to look at what it would take."

Building a software-defined 4G network
OptimERA acquired spectrum in Band 2 and Band 41, and convinced handset manufacturers to configure devices for its fledgling network. Fiber backhaul was not an option so Fitch knew his cell sites would need to use microwave backhaul. Initially, he wanted to repurpose used 2G and 3G equipment, but he ended up deciding to create a software-defined LTE network. He and his partners had learned about packet-switched networks during their WiFi days, and had been using software-defined switches since 2005. 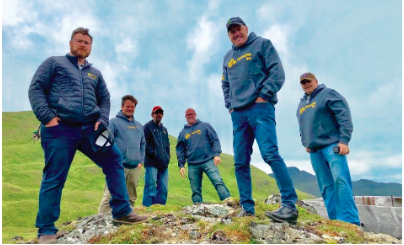 Eventually the company turned to Parallel Wireless, an upstart vendor in the wireless market that has been pushing the notion of "open RAN" where operators can pick and choose from among a variety of equipment vendors, instead of being locked into equipment from just one vendor. Parallel met OptimERA in 2017 and showed the company its software-defined remote radio head and OpenRAN software. "In some ways it seemed too good to be true because all of the other stuff out there was either really expensive or just not fully capable," Fitch remembers.

OptimERA had already deployed more than a dozen remote radio heads from another wireless network vendor that Fitch declined to name, but they weren't working as expected. The company decided to add a handful of Parallel Wireless's radio heads, which are designed to run in parallel with legacy network hardware (hence the name Parallel Wireless.) After several months, OptimERA decided to get rid of its initial set of radio heads (at an estimated loss of $1 million) and use Parallel Wireless for its entire network.

"It's a low-cost, low barrier of entry," Fitch said of Parallel's equipment. "They were able to put us online and have us operating in a matter of days Their software configured the radio head so you don't have to do all that legwork that you would normally have to do in a traditional LTE network."

OptimERA has three generic, white box server racks running Parallel Wireless's software. One controls a gateway, one controls the evolved packet core, and one controls the IP-based Multimedia Services (IMS). Routers and switches are co-located with the servers. Signal is transmitted from the gateway via microwave to remote microwave units which plug into switches, which in turn plug into radio heads.

OptimERA has financed almost everything in-house; there are no venture capitalists or investors to ask before making decisions. That was one reason the carrier was able to pivot so quickly to the Parallel Wireless solution.

Looking toward Rakuten and the open RAN future
OptimERA hopes to add more fiber to its greenfield network in the months ahead. The company is also talking to several small cell vendors, and hopes to use its Band 41 spectrum for microcells. Software defined networking will be important for OptimERA's small cell solution, just as it has been for its macrocells.

"Every time you need to add something to the network, that can be a week of messing around and troubleshooting and when you're talking about remote areas of Alaska that gets expensive really fast," Fitch said. He needs self-optimizing equipment that can be deployed by workers who may not be highly trained engineers. Fitch believes his software-defined network will help him leverage his best workers. "Now those highly qualified people can be focusing on making a really solid profile for a whole bunch of access points as opposed to doing it one at a time," he said.

OptimERA hasn't started offering LTE service to customers yet. Like Japan's Rakuten, which is also planning to build a greenfield wireless network, OptimERA is excited about the potential of a software-defined network but has yet to flip the switch. Rakuten, which has delayed its planned launch until next year, has gained a significant amount of attention in the wireless industry because it too is planning to build a greenfield, software-powered, open LTE network with upstart vendors like Cisco, Altiostar, Intel and Red Hat  a strategy the company has said will reduce its costs by up to 50-60% when compared with traditional network designs.

While massive wireless network operators such as AT&T and Verizon continue to hint at moves toward open RAN technologies, newer players like Rakuten and OptimERA are working to completely embrace the strategy with fresh eyes and new networks unencumbered with legacy vendors and designs.

It remains to be seen whether such efforts will be successful, but it certainly shines a brighter light on the push for open, software-powered wireless networks.