MWC22: What the experts think will stand out

Gird your loins. In its original time slot, starting Monday, Mobile World Congress is back, baby. Now it's probably not better than ever, given we're still in the grips of a global pandemic, but it will certainly feel a lot more normal than June's understandably damp squib.

Light Reading watched from the sidelines in 2021, but we'll be there this February, joining colleagues from our sister title Telecoms.com and the good analysts of Omdia in Barcelona to bring you the latest.

With this in mind, Omdia has put together a comprehensive bit of pre-reading for the event. And because we love our readers, here's a highlight reel to give you a taster of what we're looking forward to, straight from the analysts who watch the industry year in and year out. 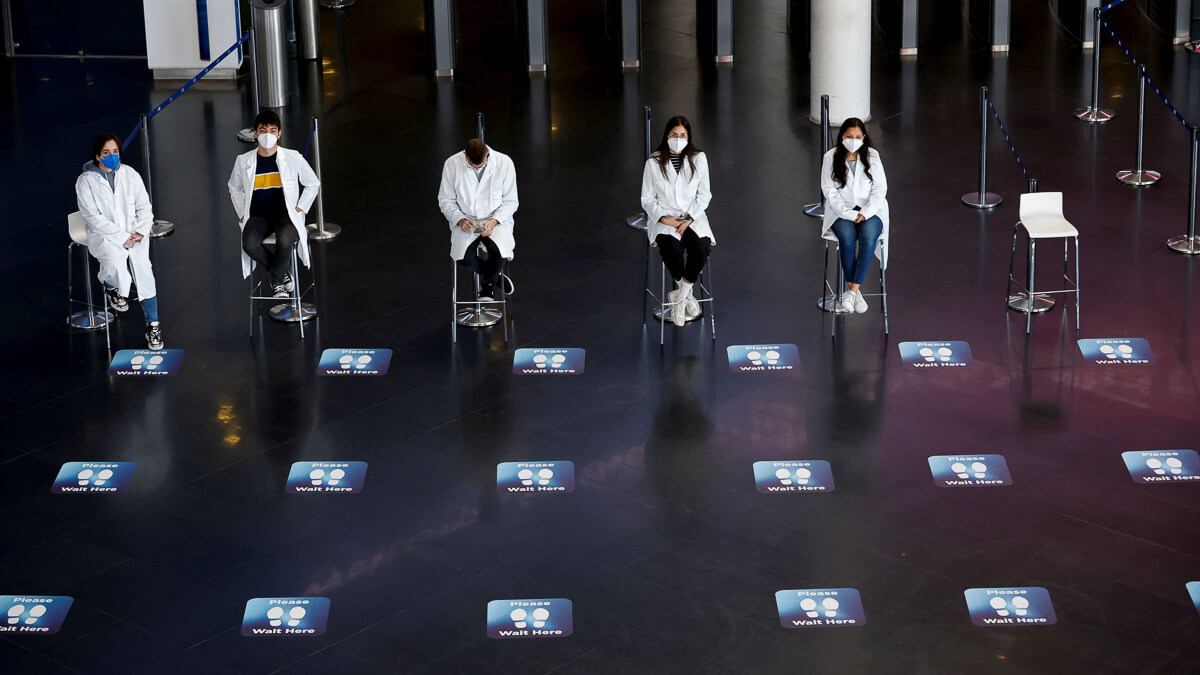 Viral exchange: Also back for MWC22 is COVID-19. Make sure you have your FFP2 masks and vaccine passport.
(Source: Reuters/Alamy Stock Photo)

"Its really about sniffing out the lay of the land in the industry after three years of no MWCs," said Informa Tech VP Evan Kircheimer, one of the authors of the report's introduction.

"Who is having conversations with whom? The centrality of CSPs at MWC had been in decline pre-COVID, but has it now accelerated, and to what degree? I suspect the most interesting and transformational conversations will be happening between webscalers, alternative providers, deep industry specialists, integrators and tech startups."

Omdia Research Director Dario Talmesio, who co-authored the report and contributed to the meat of it is equally excited.

"Like most of us, I am looking forward to catching up face to face with pretty much the entire ecosystem," he said.

Kircheimer and Talmesio say there will be some familiar faces  and some new additions.

Cloud was the big story in 2021  due in no small part to Danielle Royston's Cloud City taking over the suddenly vacant Ericsson stand.

There may be no repeat performance this year (and no Bon Jovi) but cloud is still a big story, with Big Tech chewing at the heels of telcos around the globe.

It is just a few days until we open the doors of #MWC22!

In the THREAD below, we take a look at some of the key highlights at this year's event 👇 pic.twitter.com/yyFUWFNWMM

Amazon's cloud WAN and private 5G services are examples, and AWS, Microsoft and Google will all be there in force.

That ever divisive word, purpose, will also be back, they say. Just how much of this is green/woke washing on the part of the telecoms industry, and how much will translate to meaningful action, is as always debatable.

According to Kircheimer and Talmesio, there's a twist in the tale.

"Although 'mobile' is the name of the game at MWC, look out for messaging about fiber, FWA, and other forms of fixed access, especially cast in the light of narrowing the digital divide," they said in the intro.

Edge is back in the running, while IoT and private networks are likely to feature in most industry narratives, as they're pushed for enterprise.

And 5G of course. This year, it's likely that B2B 5G and private networks will be the next great hope for some, as meaningful demand from enterprise finally materializes.

Add to this top billing contenders open RAN and next-generation 5G core. Kircheimer and Talmesio also expect AI discussions to move from CX to the network itself  from RAN to core network function automation and orchestration.

It's a dirty word for some  and something not actually that new for others. The metaverse is going to be a big talking point whether we like it or not, "in a spirit of speculative musing, rather than grounded reality."

Fiber and the digital divide

"Expect providers to trumpet how their 5G and fiber rollouts are closing the digital divide and unleashing the full potential of Internet connectivity," predicts Omdia Principal Analyst Peter Boyland.

"One of the key themes of MWC 2022 will be the increase in global Internet connectivity and the closing of the digital divide. As over three-quarters of people are expected to be connected by the end of the decade, the conversation is moving on from haves/have nots to the quality of these connections," he said. 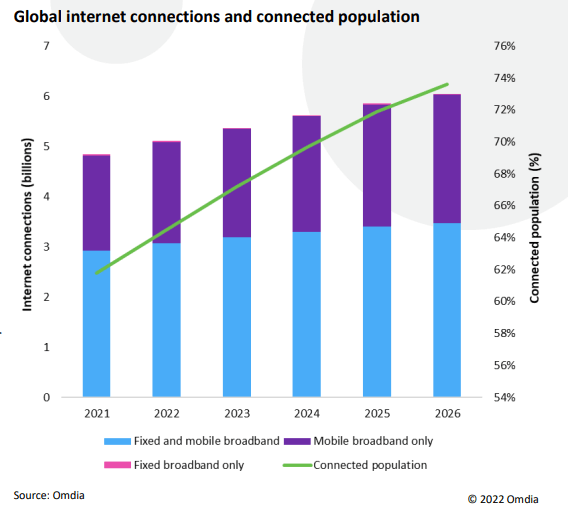 He notes that service providers are investing heavily in the next generation of mobile networks, with a wave of rollout announcements expected at MWC 2022.

"At the heart of this improved connectivity is fiber  a fiber network backbone is vital to mobile cellular connectivity, as are hybrid technologies such as fixed wireless access (FWA)," he said.

The newer kid on the block this year is low earth orbit (LEO) satellites  expect to see some big announcements on broadband service partnerships in 2022.

According to Dario Talmesio, conference goers should look out for CSPs adding flesh to their industry-specific services strategies.

"MWC is an event about networks. Everything at the show revolves around connectivity and the performance of networks to connect things and people," he said. 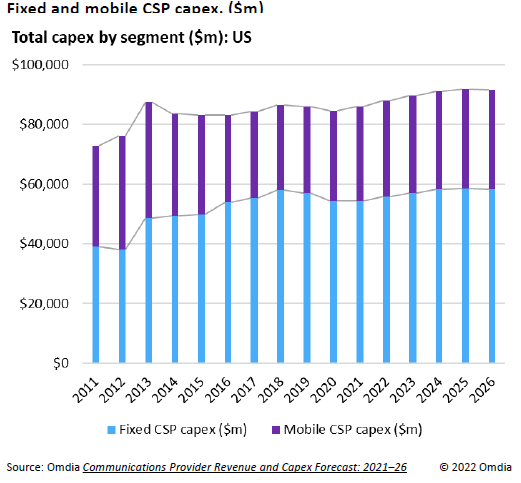 "We can expect most of the show to continue to be centered around the powerful capabilities of 5G networks, the deployment of 'real 5G' (5GSA) and network slicing, network automation, more standardized open networks, quality of service (QoS), a glimpse into 6G, and even some collaboration/integration with satellite."

"MWC22 is likely to be more about growth opportunities and investments, and less about cost cutting and network performance."

While companies are busy hyping the metaverse, the real opportunity is likely to be gaming. Omdia doesn't see it becoming the default method of going online à la William Gibson in the next five years, at least.

"While the future is being increasingly staked out by tech giants, it is a very long way from fruition. A true metaverse requires immersive Internet  enveloping the field of vision, in 3D, and with largely limitless possibilities," said says Omdia Research Director Dom Tait. 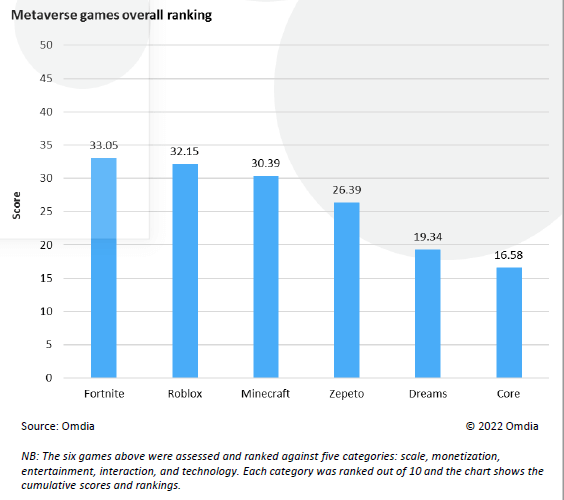 "Metaverse was likely the leading tech buzzword of 2021 even before the company formerly known as Facebook laid out grand plans for Meta's future in late 2021. Microsoft, Nvidia, and even Disney share Mark Zuckerberg's enthusiasm and ambition."

"It can be confidently expected that MWC will be loaded with stalls promising metaverse-related developments, from the concrete to the somewhat speculative. Even in more general terms, the role of telcos in providing the metaverse's gargantuan data transmission needs will be the conferences bubbling undercurrent."

The big question, said Tait, is who will pay for it.

Cloud is one of six main themes at this year's MWC, with its own dedicated stream.

"The shift to cloud-native and service-based architectures means we will also hear more from vendors about interoperability, automation, and integration capabilities," said Research Director Kris Szaniawski.

"Edge cloud  expect to hear about initial deployments and trials, edge cloud use cases, and edge portfolio announcements, including from Google Cloud, as well as fresh mobile edge pairings between operators and cloud providers."

"Sustainability will also be a key trend this year, although the genuine advances will fight for attention against plenty of greenwashing."

Szaniawski also expects lots of SaaS announcements, while the hype around the public cloud will be tempered by vendors emphasizing the hybrid and cloud agnostic capabilities of their offerings.

"Expect the AI conversation at MWC to shift from customer experience automation to AI in the network," said Josh Builta, research director at Omdia.

"Omdia's AI Applications Software Market Forecast predicts that the value generated by artificial intelligence (AI) applications in telecoms will reach $8.7 billion by 2027, increasing by a factor of eight from immediate pre-pandemic levels." 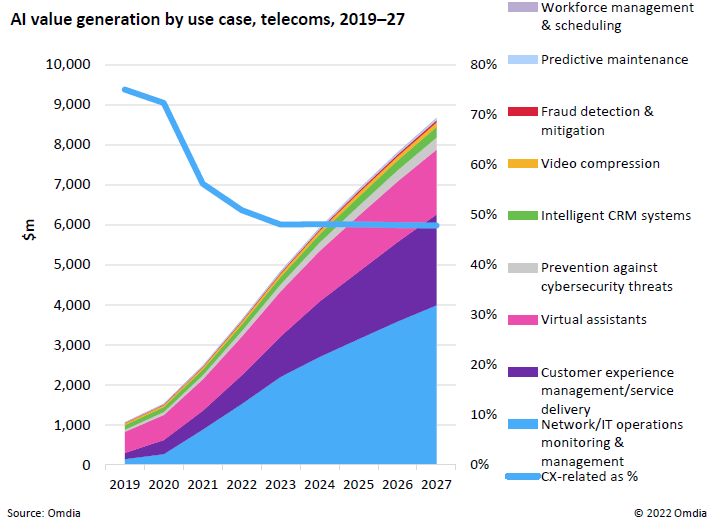 "Customer experience automation has so far been the key sector representing as much as 78% of this total However, the situation has begun to change. We expect AI providers at MWC to showcase how AI is moving from an add-on feature for CX applications to being part of the core business."

Finally, he said, 6G will be present at MWC, but mostly in the form of slide decks presenting stakeholders' visions and results from some early lab tests of sub-THz/THz spectrum.

The growing influence of 5G, artificial intelligence, and hyperscalers is going to dominate conversations around IoT at MWC, says Builta.

"A growing trend in recent years has been the increased activity from non-traditional IoT players," he said. 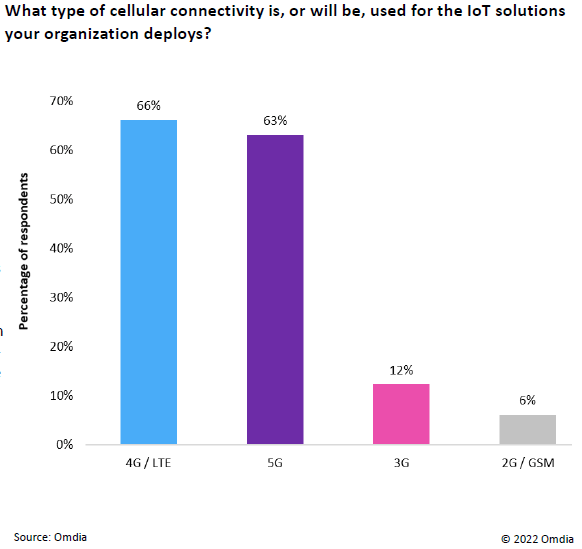 "Most notable is the growing involvement of hyperscalers in the IoT value chain, including in areas beyond their traditional reach such as connectivity and digital twins  MWC presents an ideal venue for hyperscalers to highlight their expanded IoT initiatives, in particular around alternative connectivity options, as they continue to push into areas traditionally controlled by CSPs."

Alternative payments are shifting to the center stage according to Senior Analyst Philip Benton.

"Financial technology [fintech] takes center stage at MWC 2022 for the first time after being on the periphery of discussions in recent years, with payments and crypto expected to feature heavily in conversations throughout the event," he said. 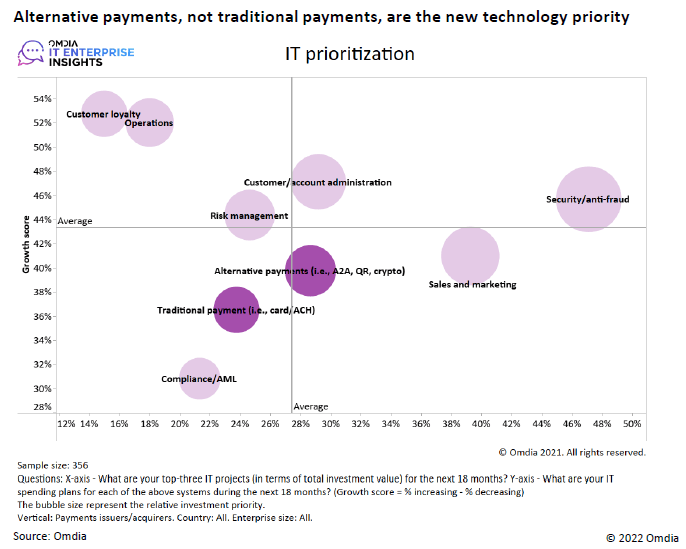 "The fintech and mobile industries continue to converge and accelerate the shift to mobile payments, with digital wallets being one of the most common payment methods globally, both online and in-store."

It wouldn't be MWC without a roster of new smartphones.

"One of the most personal consumer products, the smartphone, will play a key role in delivering the promise of 5G to users around the world. The smartphone is a critical tool for many to access online services, applications, and information  in many cases it is the only connected device available," said Principal Analyst Gerrit Schneemann. 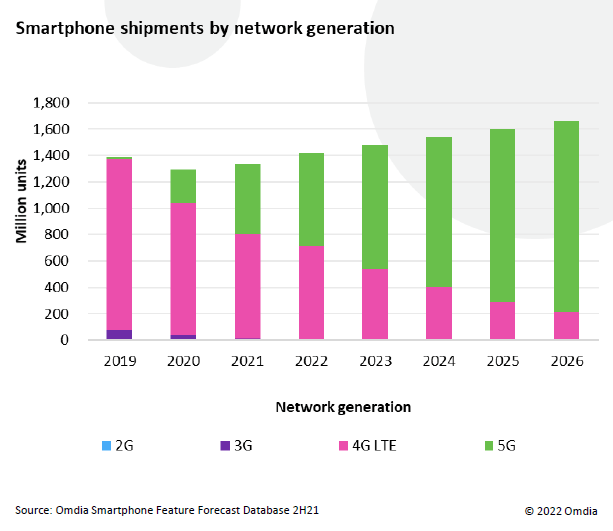 "While the availability of 5G-enabled smartphones is ahead of network deployments in some markets, the groundwork is being done to transition users to future services and applications that will only be available on the latest network generation."

It's impossible to cover everything in the report here  to read more on the subjects we've picked out, or if your area of interest is future of work, cybersecurity, private networks, video and more, download the report and digest at your leisure.

"There is always a guest of honor or a theme of honor owning the show and the conversation. We've had to have the social networks  Facebook  we've had the online content providers  Netflix, and this year we're going to have the cloud, Amazon."

"It's going to be exciting; by the end of the show, one will not distinguish the telecom world of telecom from the world of cloud and hyperscalers."

In the meantime, crack out the sensible shoes, pack the painkillers, slip your wallet into the inside pocket of your coat, and plan, plan, plan. See you in Barcelona.