Last year's Mobile World Congress was a miniaturized and warped version of the event that could once count on drawing more than 100,000 people to wintry Barcelona. Not even delaying it to June, when outdoor living and vaccine campaigns had forced COVID-19 into a summer retreat, could persuade more than 5,000 people from outside Spain to make the trip.

Most of the venue's hangar-like halls were as deserted as the shopping mall in Dawn of the Dead. A shrine to the public cloud, erected by a one-woman consulting firm called TelcoDR, offered a rare glimpse of human activity. It even managed to host a small concert featuring Jon Bon Jovi. And yes, he did perform Livin' on a Prayer.

The hope then was that normal-ish service would resume in early 2022. But months later, another letter of the Greek alphabet had been press-ganged into describing the latest COVID-19 "variant of interest," and the World Health Organization was warning that Omicron would infect half of all Europeans. Once again, the viability of holding a major international event is being questioned. 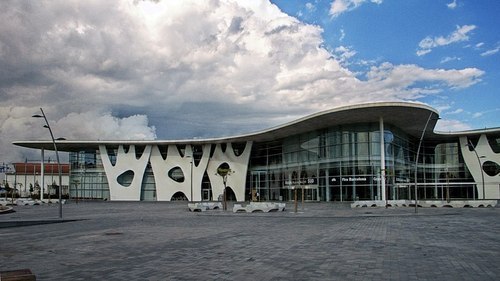 MWC has had a bad case of tumbleweed in recent years.

The cancellations already appear to have started, as well. Japanese electronics giant Sony has become the first big exhibitor to withdraw from the physical show, according to Spanish press reports (Sony's press office had not responded to Light Reading's enquiry at the time of publication). It seems unlikely to be the last.

That said, the GSM association, the organizer of MWC, insists Sony was not even booked to exhibit at this year's show. "The GSMA was surprised to see Sony's comments today about MWC22 Barcelona," said a spokesperson by email, in reference to Spanish press reports on January 13. "Whilst this is disappointing, we respect that strategic business decisions by the organization in 2020 influenced the change and wish them all the best."

The experiences of US trade shows do not offer much encouragement regarding attendance. Last week's Consumer Electronics Show (CES) in Las Vegas attracted only 40,000 visitors, a fraction of the 180,000 that made the trip pre-pandemic. The National Association of Television Program Executives has canceled a Miami show that was due to begin next week. And press reports indicate the Sundance Film Festival, Grammy Awards and E3 (a video game conference) have also been scrapped.

There is no suggestion the GSMA will join their ranks. It has been determined since October to attract more than 1,500 exhibitors to Barcelona in late February and would be in financial torment if the event were called off or massively diminished. Owing most of its revenues to MWC Barcelona and satellite shows, it has already had to lay off a chunk of its workforce after 2020's show cancellation and last year's zombie apocalypse.

But no one seriously expects to see 100,000 face-masked attendees piling into the Fira, as socially distanced from one another as mud wrestlers. If the ratio to pre-pandemic levels were identical to CES, the show would be looking at about 24,000 visitors  not much improvement on the 20,000 it welcomed last June.

MWC attendance over the years

There are some positive signals, though. Sweden's Ericsson, normally at the front of the withdrawals queue, plans a big comeback after two years of jabbering by Zoom. It will descend on its usual Hall 2 stand  the one that doubled as a Bon Jovi concert venue and cloud temple last year  presumably with its usual smorgasbord of basestation equipment. On the telco side, Deutsche Telekom and Orange expect some of their senior technology executives to brave the Catalonian air.

Physical participation by Ericsson may have GSMA boss John Hoffman bellowing Abba's Happy New Year in a late-night karaoke session with colleagues. Not only is the Swedish vendor ultra-cautious. It is also one of the main exhibitors, alongside Finland's Nokia and China's Huawei, and therefore one of the main reasons for other visitors to come. If it is confident enough to issue statements just a few weeks before the show, others will plan to go, too.

Omicron could yet prompt a reversal. "Needless to say in these days, our priority is the health and wellbeing of our people, customers and other stakeholders," said an Ericsson spokesperson by email. "We will continuously monitor the development of the pandemic and the advice of global health authorities in the lead-up to the event and base our decisions accordingly."

But another round of cancellations might condemn MWC to years of poor attendance and virtual substitutes for the physical jamboree. If travel is considered dangerous amid Omicron, when vaccines are widely available and fatality rates have plummeted, it may always look unsafe  at least, while COVID-19 is around. Few sensible politicians now think it can be eradicated like smallpox, and it will continue to mutate. Living with it means either accepting a new risk (a small one, for most people) or never meeting up again. Economically, only the cloud companies truly benefit.

The world is arguably less safe than it was in June last year, when Ericsson was not prepared to travel. In those pre-Omicron days, weekly COVID-19 deaths in the UK averaged 28, down from 3,423 in January 2021. They were up to 242 last month and have continued to rise in the last two weeks.

Like many thousands who will attend this month's Australian Open tennis tournament in Melbourne, Ericsson has possibly arrived at the rational conclusion that circumstances will not markedly improve for years. It evidently still considers the physical MWC to be worthwhile and may simply have shrugged off the corporate form of long COVID  a fear of and lethargy about returning to normality. It has been the trendsetter since the pandemic began. Unless its plans change, the GSMA must hope it still is.

UPDATE: This story has been changed since it was first published to include input about Sony from the GSMA.