MWC Los Angeles -- Sprint has become the last major mobile carrier to launch a narrowband IoT (NB-IoT) network in the US.

NB-IoT runs at 100 Kbit/s to 200 Kbit/s in bandwidth of about 180KHz, and works well providing coverage in underground and dense building environments with stationary devices. In contrast, Cat M runs at up to 1 Mbit/s in 1.4MHz bandwidth and works with voice commands and mobile devices.

Cat M and NB-IoT will both run on Sprint's Curiosity IoT core network and operating system, which Sprint has described as "dedicated, distributed and virtualized."

Sprint showed off its NB-IoT work with international automation and energy company, ABB Group, here at the Ericsson booth on Tuesday. For the floor demo, ABB Group was running a variable frequency drive (VFD) to control an electric motor via NB-IoT. 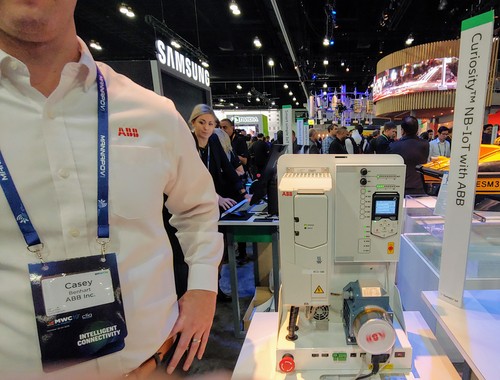 T-Mobile launched a nationwide NB-IoT network in the US in summer 2018. AT&T and Verizon followed with their own NB-IoT networks, in April and May 2019, respectively.