Qualcomm may have once seen the car as a large charger for smartphones running its chipsets, but today the San Diego company looks on it as more of a four-wheeled phone.

"It's really about creating a world when everything is connected beyond phones," CEO Cristiano Amon said as he opened Qualcomm's first Automotive Investor Day Thursday afternoon, hosted at the Classic Car Club on Manhattan's West Side.

He and fellow executives then went to work selling a narrative of Qualcomm accelerating its drive to secure a position for itself among automakers akin to its spot among smartphone OEMs: the essential company that provides the guts of the system, not just a 4G or 5G modem.

"Once you connect the car to the cloud, everything changes," Amon said. 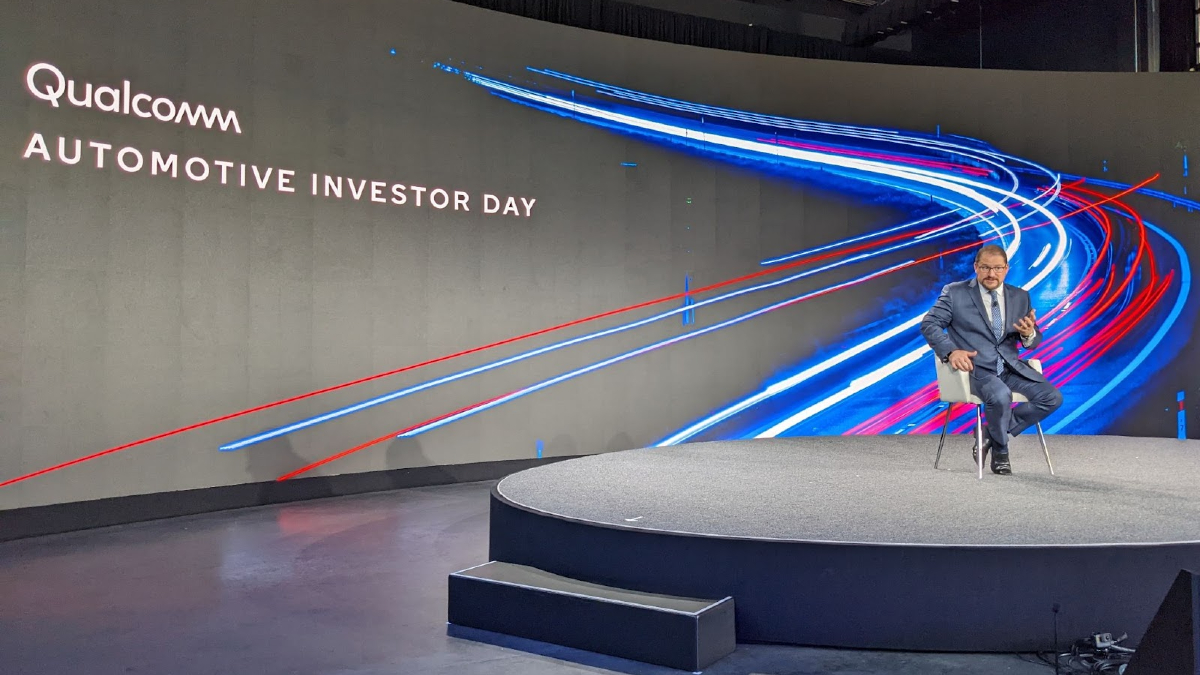 After a recorded video endorsement from GM CEO Mary Barra – "More than ever, it is essential to partner with the right companies, as we are doing with Qualcomm," she said – Amon announced that Qualcomm's "digital pipeline" for its Snapdragon Digital Chassis and related in-car systems had now hit $30 billion.

This design-win model, Palkhiwala added, assumes that revenue starts three or four years after an award and then runs for about four more years.

GM also had a physical presence to go with its CEO's virtual appearance, in the form of a Cadillac Lyriq parked next to the hall; that battery-electric SUV will be among the first vehicles built on Digital Chassis.

Other auto executives followed GM's Barra with their own video testimonials: For example, Stellantis CEO Carlos Tavares ("We are confident that Snapdragon Digital Chassis will give us the horsepower we need to win"), Mercedes Benz CEO Ola Källenius ("It's great to have Qualcomm on our side"), and Honda CEO Toshihiro Mibo (he announced that an upcoming US model would ship with Qualcomm's Digital Cockpit dashboard software in the second half of this year).

A profusion of price points, and maybe car business models too

At the event, Qualcomm emphasized how automakers can deploy Digital Chassis at varying levels of sophistication and cost. Palkhiwala said the Qualcomm content in a vehicle could range from $200 to $3,000 and predicted that "Going forward, the mix will continue to shift towards the high end."

Some manufacturers have already placed their initial bets in the most expensive end of the market – the deal Stellantis announced in April to adopt Digital Chassis will debut Qualcomm's work in Maserati luxury vehicles – but Qualcomm aims for this platform to work on a base-model Chrysler too.

"We created, by design, a platform that can scale to all cars," Amon said. Both he and Palkhiwala also said Qualcomm was looking at how to make a version of Digital Chassis work in e-bikes.

Qualcomm executives further noted how the connected capabilities of Digital Chassis will let OEMs build their own ties to their customers. As Amon said, "The car companies have an opportunity to have a direct relationship with the car owner, in real time."

Nakul Duggal, SVP and general manager for Qualcomm's automotive business, touted the ability of an OEM to win aftermarket business using that channel – "unlocking its services potential," as he put it.

How that gets unlocked and at what cost would be up to individual automakers. The connected nature of this platform would make it easier for car manufacturers to require a subscription to use some features, a possibility Amon did not knock down during a post-presentation Q&A.

Thursday's presentations also left uncertainty about a critical aspect of in-car computing: its software-support lifecycle. Duggal acknowledged that cars represent a profoundly different market than smartphones, saying "you have to actually support these products for an extensive period," but did not specify a number of years.

In an email sent by a Qualcomm publicist Monday, Duggal suggested that car OEMs would determine how much to exercise the update features of Qualcomm's Car-to-Cloud Services platform.

"It is built into the edge device, with cloud back end, and allows us to host customer services while also providing our own services," he wrote. "Through these types of connected, scalable solutions, OEMs can continuously update their vehicle systems well into the future."

An unclear route to self-driving capabilities

Meanwhile, support for driving assistance designed to evolve towards full automation – a long-sought goal and a subject of frequent overpromising by such firms as Tesla, the highest-profile company that hasn't bought into Digital Chassis – remains on a slow-moving assembly line.

Qualcomm has been collaborating with BMW to develop a system capable of Level 3 conditional automation, with the first such vehicles due from the German carmaker in 2025. After that, the terms of that deal allow Qualcomm to provide this system to other OEMs.

Level 4 automation, in which the car operates autonomously in defined areas and conditions and the driver can become a passenger, is further off. As Amon said: "We are designing today for the L3 solution, but the platform is designed to be upgraded to L4."

Analyst Ian Riches, VP of the automotive practice at Strategy Analytics, said right after watching the presentation that he expected even less business from L4 automation.

But L2 automation – in which the car steers, accelerates and brakes on its own but requires constant monitoring from the driver – is well on its way to becoming a table-stakes feature. "L2 is going to be on everything pretty damn soon," Riches said.

The problem for Qualcomm there is that so many other automotive semiconductor firms are chasing after that same more easily-achievable market. But, Riches added, Qualcomm also now has a commitment to this market from the top.

"He sounds like a CEO excited in automotive," he said of Amon's presentation. "Two years ago, he didn't sound like it."