Qualcomm, Intel and Huawei are among the top contributors to the new Wi-Fi 6 technology standard, according to new reports on the companies' standards filings.

The latest report on the issue comes from NGB Corporation, a Japanese firm that provides intellectual property prosecution and litigation, among other services. In its September report, the firm found that Qualcomm and Huawei each hold more than 110 Wi-Fi 6 standard-essential patent (SEP) families, and are in the leading position in patents for the technology. The firm said the two companies are followed by Intel, LG Electronics, Newracom and Marvell. 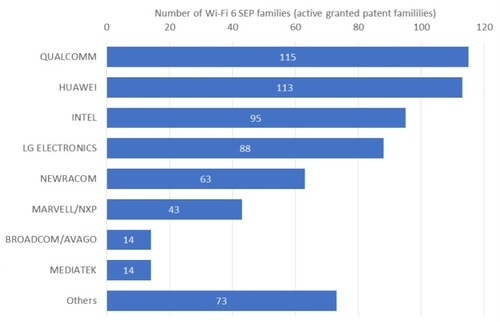 NGB shows the ranking of the top eight companies in terms of the number of their Wi-Fi 6 SEP families. Click here for a larger version of this image.
(Source: NGB)

NGB said it derived its findings from the number of contributions each company made to "task groups" in the IEEE, which officiates the Wi-Fi standard. However, NGB cautioned that "this report does not consider the validity of each Wi-Fi 6 SEP."

The firm also looked at patents related to some of the top technologies that comprise the Wi-Fi 6 standard, ranging from QAM to beam forming. The firm found that OFDMA technology counted the largest number of related SEP patent families, and that "Huawei holds the maximum number of the Wi-Fi 6 SEP families relating to OFDMA, followed by Qualcomm and Intel."

High-tech patent counting is no easy task. For example, a separate report from IPlytics  a German company that analyzes the technology landscape for patents  came to some slightly different conclusions. In its report, the firm tracked contributions across different generations of the Wi-Fi standard  Wi-Fi 5 (802.11ac), Wi-Fi 6 (802.11ax) as well as the expected Wi-Fi 7 (802.11be) standard  and reported that "Qualcomm has submitted most contributions to all generations from Wi-Fi 5 to Wi-Fi 7." 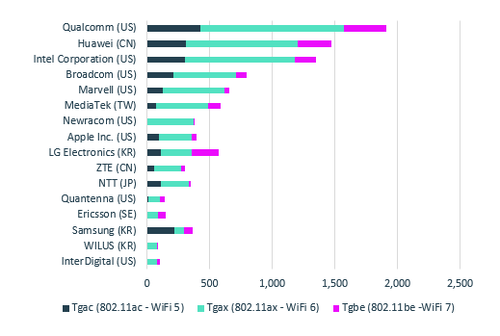 IPlytics reported on the submitted standards contributions per company for various versions of the Wi-Fi standard. Click here for a larger version of this image.
(Source: IPlytics)

And why is all this important? IPlytics' Tim Pohlmann explains: "For a long time, the technologies behind cellular networks and Wi-Fi networks were fairly different. However, as the latest generations of these technologies have developed over the last few years, there has been a great deal of crossover between them. In fact, the performance improvements with Wi-Fi 6 could be great in some situations (e.g., sports stadiums, concert halls and potentially some corporate campuses) and some people believe it could be a threat to 5G."