Qualcomm took the wraps off its newest smartphone chipset, the Snapdragon 888, a product the company is hoping will not only extend its lead in the smartphone industry but will also push 5G into a much wider range of devices.

"I'm thrilled about what's ahead," said Qualcomm President Cristiano Amon. "The potential of 5G is astounding."

A number of analysts largely agreed with Amon's positive outlook.

"The Snapdragon 888 is Qualcomm's halo product," wrote Anshel Sag, a consumer and chip tech analyst at research and consulting firm Moor Insights & Strategy, in response to questions from Light Reading. "The Snapdragon 888 will be the chip that most of the leading Android OEMs [original equipment manufacturers] will leverage to ship their flagship smartphones."

"Specs are up across the board," Tweeted IDC analyst Phil Solis of the Snapdragon 888, noting that it supports more operations per second than any other smartphone on the market.

The Snapdragon 888 is Qualcomm's newest high-end applications processor for smartphones. The applications processor is the chip that runs all the fancy functions in a smartphone, like flashy video games and high-end cameras. But Qualcomm confirmed that its Snapdragon 888 can also be integrated with the X60 5G modem it announced earlier this year. The X60 is a "cellular baseband processor," which is basically the chip that connects a smartphone to a 4G or 5G network.

As Cnet noted, the ability to integrate an application processor with a cellular baseband processor  dubbed system-on-a-chip, or SoC  is an important way for smartphone vendors to improve battery life and size by combining everything into one piece of silicon. 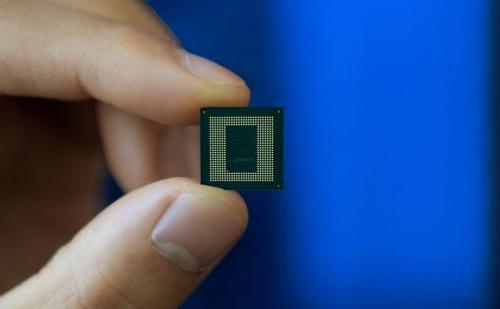 Qualcomm's new Snapdragon 888 can be combined with its 5G modem.
(Source: Qualcomm)

"I believe that the Snapdragon 888's X60 5G modem is going to be the biggest differentiator from the competition as most of the industry lags behind Qualcomm in modem capabilities," noted Sag with Moor Insights & Strategy.

Qualcomm has much riding on the Snapdragon 888. According to research firm Strategy Analytics, Qualcomm was the world's biggest provider of cellular baseband processors with 39% share in the second quarter of this year. And Qualcomm commanded fully 50% share of the 5G baseband market during the period.

Qualcomm was also the world's biggest supplier of smartphone application processors with 32% revenue share in the second quarter, according to Strategy Analytics.

Thus, the 888 could help solidify Qualcomm's position in both sectors.

"We believe that the Snapdragon 888's modem, AI, gaming and camera specs look very impressive," wrote Sravan Kundojjala of Strategy Analytics, in response to questions from Light Reading. "Historically, premium tier chips accounted for less than 15% of Qualcomm's total application processor shipments but accounted for the bulk of Qualcomm's revenue and profit, thanks to high average selling prices."

Already Chinese smartphone maker Xiaomi said it would use the Snapdragon 888 in its forthcoming top-tier phones. Other phone makers, including Samsung, Motorola and ZTE, are also expected to use the 888.

However, Qualcomm does face geopolitical headwinds. As PCMag noted, Qualcomm's market share in China declined this year because of US government actions against Huawei, pushing the smartphone vendor to use silicon from HiSilicon.

Qualcomm's leading position in the market has significant implications for network operators across the world, considering they run the networks that will connect all those devices.

Qualcomm, for its part, said its new Snapdragon 888 applications processor, coupled with its X60 modem, will support 5G in both millimeter wave (mmWave) spectrum and spectrum below 6GHz. The company also touted support for 5G carrier aggregation, Dynamic Spectrum Sharing (DSS) and 5G running in both standalone (SA) and non-standalone (NSA) configurations.

As PCMag noted, the carrier aggregation component of Qualcomm's offering will be important to 5G operators, ranging from AT&T to T-Mobile, because it will allow them to speed up their 5G networks. Carrier aggregation technology allows operators to bond together transmission across different spectrum bands, and the X60 supports that function across a wide range of bands, including those below 6GHz as well as mmWave spectrum bands.

Indeed, the Strategy Analytics analysts estimated that fully 35% of Qualcomm's applications processors were coupled with its 5G modems.

Qualcomm unveiled its new Snapdragon 888 during a virtual event Tuesday, and made it clear that the chipset will play an outsized role in the company's overall strategy. Qualcomm derives the bulk of its chip revenues from sales of silicon to smartphone vendors, and the 888 is now the company's top-tier, flagship product.

But Qualcomm's Alex Katouzian also explained that the technologies that Qualcomm develops for smartphones often trickle down into all its other offerings, whether that's for PCs or virtual reality goggles.

Indeed, Qualcomm ended its event with a video of a Snapdragon 888 demonstration it conducted in its San Diego headquarters. The demonstration featured a pair of remote control race cars powered by the company's Snapdragon 888 and connected to a private 5G network supplied by Verizon and Ericsson. Video from the cars was streamed over a mmWave 5G network to their drivers, thus showing off not only the processing capabilities of Qualcomm's newest chips but also the potential for new and unique 5G products and services.

#ICYMI at the #SnapdragonSummit, @Jon4Lakers remotely raced a 5G #mmWave-connected RC car against professional RC racer @RondaDrakeRC with #Snapdragon 888 5G Mobile Platform-powered smartphones  and holy #5G, was it awesome. Check it out below. pic.twitter.com/bcE96jzNIm

It's that kind of opportunity that both Qualcomm and its network operator partners are keen to foster. After all, creating new categories of devices would allow Qualcomm to sell more chips, and it would allow network operators to make more money from connecting more devices.