As predictable as a hangover on New Year's Day, the assertion every January that IoT (the Internet of Things) is poised for a breakthrough year is likely to elicit similar howls of anguish from seasoned industry observers used to disappointment. But as more efficient network technologies move out of the lab and into commercial deployment, the signs this year are more encouraging than usual. The falling prices of equipment and services could also give IoT a much-needed shove in the right direction.

Despite the bullish sentiment that has long surrounded it, IoT continues to underwhelm, as far as most operators are concerned. Data gathered by Northstream, a Swedish consultancy, and shared with Light Reading in late 2017 showed that IoT revenues as a percentage of total sales were just 1.59% for Vodafone Group plc (NYSE: VOD), 1.18% for Verizon Communications Inc. (NYSE: VZ) and as little as 0.53% for Spain's Telefónica in the third quarter of that year.

Analyst firm Analysys Mason also notes that IoT still accounts for "only a small part of operators' business." In research published earlier this month, it found that IoT constitutes less than 2% of revenues for Vodafone, Verizon, Telefónica and Telstra Corp. Ltd. (ASX: TLS; NZK: TLS). Even if IoT revenues grow 15% annually -- the average organic growth rate so far -- they would not cross the 5%-of-sales threshold until 2026. And that is assuming the top line stays flat. (See Telstra Launches Extensive NB-IoT Network.)

These figures have not stopped the IoT evangelists from promising the usual salvation this year. Chief among them is China's Huawei, which told analysts and reporters "the golden age of IoT has arrived" at a press briefing in London in February. Huawei Technologies Co. Ltd. argues that when IoT revenues generate more than 1% of an operator's total sales, they cross an important inflection point. "IoT growth will be much faster afterwards," said Edward Fan, Huawei's vice president of carrier business group marketing. "IoT will become a major source of revenues for operators." (See DT, Chinese Operators Take NB-IoT to Market.) 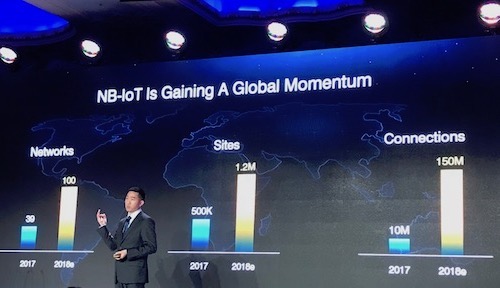 These forecasts prompt guffaws from Northstream CEO Bengt Nordström and are bound to be viewed with skepticism by many of the operators that Huawei serves. It is not just the rate of growth in connections that looks optimistic, either. Huawei's forecasts imply that average revenue per connection (ARPC) falls from $13.33 last year to $11.43 in 2025, a compound annual growth rate of -1.9%. Yet Analysys Mason reckons ARPC is falling at a rate of between 5% and 10% annually. And Huawei's ARPC numbers look high when compared with IoT service charges from companies using non-cellular technologies. LoRa connectivity, for instance, is available from as little as 5 ($6.15) annually, according to advertising.

Huawei assumes that operators will sell more than just connectivity, however. Responding to questions from Light Reading, Fan said: "We are seeing the carriers changing their business models and there are already good practices in this area. They are selling services and also offering data mining because IoT is generating so much data. That is a goldmine."

But selling data analysis will be easier in some jurisdictions than others. European operators, in particular, may struggle to monetize data in this way because of strict regional rules about data privacy. The fallout from the recent data scandal involving the UK's Cambridge Analytica, which used Facebook data for political advertising, might result in much tougher regulations in other countries, too. (See Facebook: The Sick Man of Silicon Valley.)

What's more, operators' efforts to be more than just connectivity providers have been fairly cack-handed. While there are undoubtedly success stories, most telcos still generate a negligible share of revenues from other activities. Nordström continues to feel that systems integrators and consulting companies like Accenture and Capgemini, which have experience across numerous industries, can do a better job than operators at developing an IoT service proposition.

Next page: Signs of life