PEACHTREE CORNERS, Ga. -- With an eye on an emerging slice of the 5G services market, the city of Peachtree Corners -- with Sprint, Georgia Power and other partners -- launched its IoT-focused Curiosity Labs here in this leafy city just outside Atlanta.

Sprint has rolled out its 2.5GHz mid-band 5G network at the Peachtree industrial park for companies to conduct live trials of IoT projects. Sprint today showed off an autonomous Olli mini-bus, along with a drone delivering a package to a smart mail box and a remote-controlled electric scooter.

Indeed, the event, which started with a moment of silence for the anniversary of 9/11, finished up with the Olli, an autonomous shuttle, driving laps around the site and a package delivery from a drone. 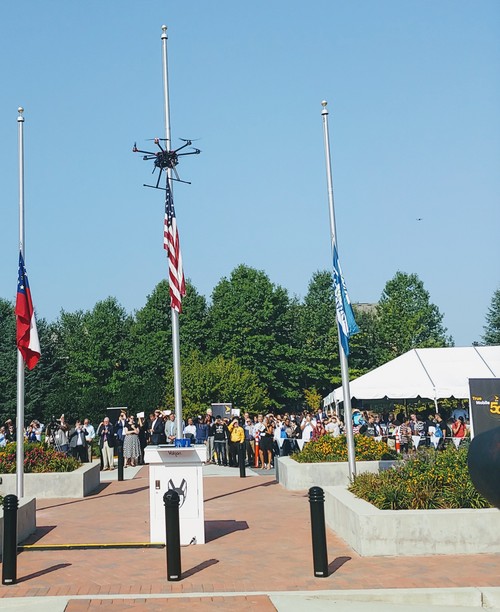 An Autodyne drone delivers a package to a Valqari postbox.

Rook said that the 5G network was about delivering "mission-critical" rather than "best-effort" data on the autonomous and remote-controlled machines. For instance, he said that the Peachtree site has GPS micro-positioning that can allow drones to be positioned within "inches" of a target rather than the within nine feet range of a target that GPS-based tech usually achieves.

Sprint has already launched its Curiosity platform on 4G. Rook says that the network is running on LTE Cat M. The 5G-based activity at Peachtree Corners will offer more real-time capabilities to devices like drones and autonomous vehicles, however, as Sprint can utilize low-latency capabilities on 5G for real-time control of devices.

The Curiousity Labs venture was planned and funded by the city of Peachtree Corners. Located in the northern suburbs of Atlanta, it was incorporated as a city in 2012.