Re-Ingenu: An IoT Startup Is Born Yet Again

Comment (2)
Prized assets
Ingenu believes that network could still be a prized asset to the right company. When rollout ground to a halt, the network was available in more than 35 cities concentrated in the southern US. Finishing the job will cost another $250 million to $270 million, executives estimate, if the operator's goal is to provide near-nationwide coverage. While that may be an eye-watering sum for a struggling IoT start-up, it is a fraction of what it would cost to build a 5G-based IoT network, says Gazzolo. So who might bite?

Discussions have taken place with Amazon.com Inc. (Nasdaq: AMZN), Google (Nasdaq: GOOG) and Microsoft Corp. (Nasdaq: MSFT), although Ingenu has still not identified a buyer. The question is whether any of these technology giants would seriously want to become a network operator. "People say they don't but it depends on the standpoint," says Razi. "If the cost is this low it becomes interesting." For a company like Amazon, he reckons, an IoT network could support service opportunities in markets such as insurance.

So far, efforts to find a third-party maker of access points have been more fruitful. Ingenu has now signed a memorandum of understanding with a manufacturer based in Asia, whose identity it will not disclose. Because that agreement is not exclusive, other such contracts are a possibility. Coming on top of the decision to sell the US network, the step back from manufacturing has already had a dramatic impact on headcount and operating costs. Having employed around 150 people in Horn's glory days, Ingenu is today down to about 20 staff, including contractors. Razi doubts it will ever need more than 35. 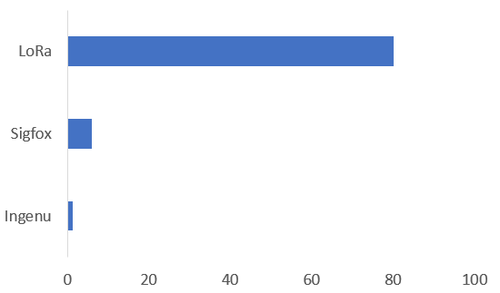 Notes: Figures are based on estimates of active connections; Sigfox number is based on company's end-2018 target.
(Source: Companies, industry sources)

Can a company of such diminutive stature really make an impact on the global IoT market? Sigfox has around 400 employees on its books, according to LinkedIn data, and network partners in dozens of countries. LoRa has spawned an entire ecosystem, recently boasting more than 100 network operators worldwide. Then there is the cellular industry with its NB-IoT and LTE-M standards, which have now drawn commitments from some of the world's biggest mobile operators.

Ingenu seems a long way behind. Data it has provided shows there are just a smattering of networks outside the US and that only 1.4 million of Ingenu's 2.5 million connections are currently active. Sigfox was aiming for about 6 million by the end of 2018 (it has not responded to requests for an update) and some 80 million IoT connections are today based on LoRa, according to an industry source. NB-IoT is developing quickly in China. (See Can LoRa Withstand the Cellular Stampede? and IoT boom won't pay off for mobile operators.) 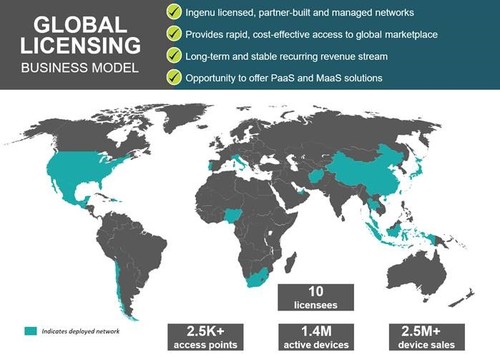 It is largely via partnerships with utilities and other types of business, and not through in-house expertise, that Ingenu hopes to make this move. It has already formed a joint venture in Asia, where it is carrying out ten proofs of concept (PoCs) in areas including agriculture and tracking. In France, a utility that was disappointed by Sigfox and LoRa, and found cellular too expensive, is currently involved in a PoC for smart meters, says Gazzolo. While details of these activities are thin, he expects Ingenu to be in a different commercial position six months from now.

On the technology side, meanwhile, Ingenu is preparing to launch version 3.1, making the transition to an entirely cloud-based system. This should allow Ingenu to manage and support a more comprehensive platform-as-a-service offering, and lead to a tightening of security. "One problem we had before were rogue networks operating around the world without our seeing any benefits from a financial point of view," says Gazzolo. "Now we have complete management of the cloud globally."

A real signal of confidence in Ingenu's prospects would be a much-needed injection of funds, especially given Sigfox's apparent failure to hit fundraising targets. Still a managing partner at Third Wave Ventures, Razi continues to play a critical role on the fundraising side. A financial community that spurned Horn has been warming to the reborn Ingenu, he says.

But it has been three and a half years since Ingenu last raised any funding, according to Crunchbase, and this is not the first time it has tried to reinvent itself. Before Horn's arrival in 2015, it was focused on building private networks for utilities and municipalities. After its second coming turned out to be a false dawn, investors may be wary. For Razi and Gazzolo, it will hopefully be a case of third time lucky.

"Thanks for the comments Lawrence. Just to set the record straight -- we are not debunking Lora or SigFox -- we are passing along information coming from Lora and SigFox customers who deployed in scale with unacceptable outcomes. It is not a criticism -- this industry needs to stop marketing talk and get down to the business of understanding customer needs. Defending outcomes that are failing and have failed does not further anyone's interests. I am not clear whom you are talking to regarding battery life and sensor issues, but I suggest you actually pick up the phone and talk to folks that are deploying RPMA today and get some real-life answers. RPMA works -- it is the only system that was designed and tested for years before it was deployed. I don't want to get into a tit-for-tat here -- this also doesn't serve anyone's interest. Ingenu's problems were directly related to mistakes made in business strategy, marketing and improper vetting of partners. The technology platform is solid and outperforms. Let's just leave it at that. Please take a look in the mirror and stop defending failed systems and flawed strategies. We will certainly do our best to succeed using this approach. Please do the same and perhaps one day we can all start collaborating to serve the needs of a global economy that is screaming for machine connectivity."
Reply | Post Message | MESSAGES LIST | START A BOARD

"The Ingenu technology would cover the same area as a Sigfox network with a fraction of the sites".  Provided they could actually do this (unproven so far), and since they can't change physics, it requires more sensor side power.   All companies using the ISM band have to play by the same set of rules. So, something has to give. This is a major problem according to companies I have personally talked to that have tried Ingenu. It makes battery life and/or sensor size to house a large battery problematic.

"RPMA's ability to support "downlink" communications -- from the network to the sensors -- was also far superior".   Just to be clear, this is a true statement when compared with Sigfox.  It is not true for LoRa, as LoRa features full duplex communication including FOTA capabilities.

Ingenu, like Sigfox, is not an open standard.  They are both start-up companies using proprietary technologies.  Building a global ecosystem is an extremely daunting task.  Networks without solutions are doomed to fail.  IoT is just as much about "interoperability" of things as it is "internet" of things.  The "O" in IoT can just as easily mean open.  IoT is NOT about proprietary solutions.  The odds of either company pulling this off are slim to none.

"Whether or not Ingenu's technology is the best in the industry, its marketing has "sucked," Gazzolo concedes."  Over the years I have been both a partner and competitor to John Horn and his former CMO Landon Garner going back to thier Raco Wireless days.  We are acquaintances but not close friends.  I can tell you from personal experience they are two of the best, most effective marketers in all of IoT.  No one would even know about Ingenu and RPMA if it wasn't for them. I did not agree with thier strategy, but I admired thier marketing.  What's really ironic is that it is Mr. Horn's picture that is the cover on the article.  Gazzolo's comment is laughable at best.

Ingenu has done well in the oil and gas vertical where the power concern is not an issue.  It's also a vertical where cash is readily available if the ROI is right.  Ingenu might be wise to consider themselves a vertical solution and stop trying to be something they are not and will most likely never be.