Comment (4)
Cruising
Even after the cellular retaliation of recent years, Sigfox's technology looks remarkably inexpensive. During an interview with Light Reading in 2014, Le Moan said that per-device connectivity costs were as little as $1 annually. Sigfox has also boasted a big advantage over cellular on the cost of adding silicon to end-user devices. In 2016, it estimated its own silicon costs would fall from about $2 to $0.50 per device over the next five years. The equivalent cost for NB-IoT, its main cellular rival, would be roughly $5 at the end of that period, it reckoned. (See Sigfox Plans Global IoT Network.)

Even if these estimates grossly exaggerate the difference between Sigfox and cellular, any progress the French company has made owes everything to its perceived cost advantage. Sigfox is clearly not for everyone. It is so narrowband that even some M2M applications are too demanding. Its weak two-way capability does a poor job of transmitting signals from the device back to the network, say critics. But for companies that place an emphasis on cost, and need a no-frills connection, it is hard to beat.

That much explains the support that Sigfox gained after its network launch in 2012. Investment has flowed from Bpifrance, a French investment bank, as well as a joint venture between the Caisse des dépôts et consignations and EPIC Bpifrance, two French government agencies. Intel Corp. (Nasdaq: INTC), the world's biggest chipmaker, has also provided funding. And in a sign of cellular's early shortcomings, so have NTT DoCoMo Inc. (NYSE: DCM), Telefónica and SK Telecom (Nasdaq: SKM), three of the world's biggest mobile operators.

It helped that Le Moan had been able to lure Anne Lauvergeon to the business in 2014. Replacing Le Moan as board chair, Lauvergeon had previously worked in the government of François Mitterand, France's president between 1981 and 1995, and had excellent political connections. She had also served as the CEO of nuclear power group Areva between 2001 and 2011. In 2009, Forbes magazine ranked her the ninth-most powerful woman on the planet. 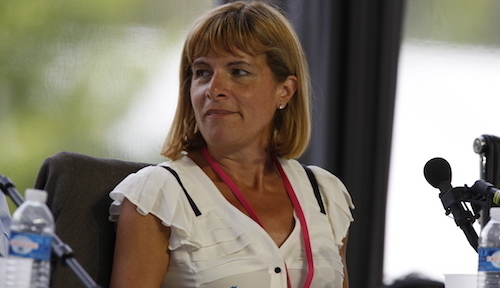 French politician and businesswoman Anne Lauvergeon was a high-profile recruit for Sigfox in 2014.

Crunchbase, a website that tracks funding for startups, calculates that Sigfox has raised about 277 million ($344.9 million) in total since 2009. About $115 million of that came in February 2015, when there was no NB-IoT and Sigfox seemed to be riding high. The three cellular operators participated in this round, as Sigfox noted in a press release at the time. In it, Lauvergeon hailed investors for their "trust" and the Sigfox team for its "dynamism." (See Sigfox Closes $115 Million Funding Round.)

Wan skies
Since then, trust and dynamism have waned.

In mid-2016, a French customer called Nigiloc, developing tracking gadgets for bicycles, told Light Reading that Sigfox's technology had not met its quality threshold, appearing to be unsuitable when "mobility" was a key requirement. Clear Channel Outdoor, an advertising company, and MAAF, a French insurance firm, were also rumored to have had problems with Sigfox, although neither would appear to need any support for mobility. Clear Channel declined to comment on those rumors, while MAAF never responded to Light Reading's approach. (See Sigfox Said to Face Customer Backlash.)

Thomas Nicholls, the former head of communications for Sigfox, and one of the senior executives who left during last year's exodus, would not deny those companies had experienced difficulties. He did insist, however, that all three were among Sigfox's earliest customers, and that they might have had problems unrelated to connectivity. Nicholls also said Sigfox had never provided any commitment to Nigiloc to support "quick-moving devices," a bizarre assertion given Nigiloc's role. The signs were that Sigfox had tried to address needs its technology could not satisfy.

There was other murkiness, too. At the time, Sigfox claimed to have 7 million connections on its networks globally, and that figure had reportedly risen to about 10 million by the end of the year. But these numbers, it transpired, were simply the amounts that Sigfox had agreed to support in contracts. The number of "active" connections was somewhat less than 7 million in June, Nicholls acknowledged, although he would not disclose it. That amount became apparent only at the start of this year, when Sigfox revealed it to be just 2.5 million. Even if Sigfox were making substantially more than $1 per device annually, connectivity revenues would account for only a small fraction of the 30 million ($37.4 million) it generated in sales that year.

Instead, most of its revenues have come in upfront fees it collects from partners. While Sigfox has played the role of network operator in the markets of France, Germany, Spain and the US, it works elsewhere through network licensees, or SNOs. The only way to keep these revenues flowing is to recruit more SNOs. And as Sigfox has given partners exclusive rights in their national territories, there is a limit to how many it can recruit. At some point, Sigfox will have to replace these sales with revenues from connectivity. Unless there is dramatic growth in "active" connections, it risks falling short.

Bumps
Meanwhile, some SNOs themselves may be treading a fine line between survival and failure.

Besides agreeing to share about 40% of their connectivity revenues with Sigfox, SNOs also assume the huge investment burden of building a Sigfox network, which includes paying around $4,000 for each basestation. Despite this, a clause in the contract allows Sigfox to buy the SNO's network at the end of a seven-year agreement at accounting value. After depreciation and amortization have taken their toll, that could mean at a price of next to nothing.

"You enter into negotiation with Sigfox and after many months it appears with this bunny-in-the-hat, buyback clause that is totally absurd," says one source who agreed to speak with Light Reading on condition of anonymity. "This clause is something that all SNOs have."

In practice, Sigfox would be unlikely to execute the buyback clause unless it had piles of cash and an SNO wanted out. "That is a curious situation because the SNO wants out only when it is not flying," says another source with knowledge of the contract arrangements. Nevertheless, a number of SNOs, many of which are very small companies, are rumored to be struggling. And only Thinxtra in Australia has been especially vocal in its support for Sigfox, dismissing criticism of the French company, and suggestions it is a "Ponzi scheme," on Light Reading's message boards.

Despite the onerous contracts, some companies have clearly seen a path to success in a Sigfox partnership. With a disciplined approach, and full commitment, the SNO arrangements can work, argues the source who first described them to Light Reading. "It requires a lot of effort and to be right on target, but it is possible with a startup attitude and huge means," he says.

Sigfox, however, has notably failed to land many deals with larger organizations, including cellular operators. Although it previously signed agreements with Telefónica and France's SFR, neither company appears to have made commercial use of its technology, and certainly not on a widespread basis. Sigfox identifies neither as partners on its website. (See Sigfox 'Only Option' Today, Says Telefónica and Altice, Sigfox Join Forces in French IoT Battle.)

Has the recent emergence of lower-cost cellular technologies spoilt some of the appetite for Sigfox? If so, it has not stopped operators from feasting on LoRa, another technology using unlicensed spectrum and conceived outside the cellular industry. Comcast Corp. (Nasdaq: CMCSA, CMCSK) in the US, KPN Telecom NV (NYSE: KPN) in the Netherlands, Orange (NYSE: FTE) in France and SK Telecom in South Korea are all making use of it, sometimes in parallel with cellular. (See SK Telecom Sees LTE-M, LoRa as Its 'Two Main IoT Pillars', Orange Hails LoRa Breakthrough as Bouygues Ups IoT Game, Don't Put a SIM Card in a Rodent Trap and KPN to Include LTE-M in IoT Mix in 2017.)