Nearly a decade ago, Christophe Fourtet and Ludovic Le Moan, two Frenchmen with a passion for technology, had an idea they believed would transform the slumbering market for "machine-to-machine" (M2M) communications into a multi-billion-device global phenomenon -- and make them rich in the process.

Sigfox, the company they subsequently built, has fast become a household name in today's "Internet of Things" industry. But it is also mired in turmoil, intrigue and uncertainty about its very survival. A sale of its networks seems a growing possibility.

Ever since Sigfox was founded in late 2009, its admirers have seen it as a bantamweight with a knockout punch. Generating sales of only about 30 million ($37.4 million) in 2016, it has attracted far more publicity than most companies of its size, buoyed like an up-and-coming sports talent by expectation and promise.

With its proprietary network technology, it has long been able to boast a much lower-cost radio system than its rivals. Investors continue to hope this could one day provide connectivity for billions of everyday objects, ranging from residential smart meters to industrial tracking devices. They have included some of the world's biggest firms, as well as state-backed funds in France.

Moreover, as an all-too-rare example of a French technology champion in a US-dominated landscape, Sigfox has been the toast of the Élysée. Emmanuel Macron, France's current president, was even pictured at a recent contract-signing ceremony in China.

All the Presidents' Men 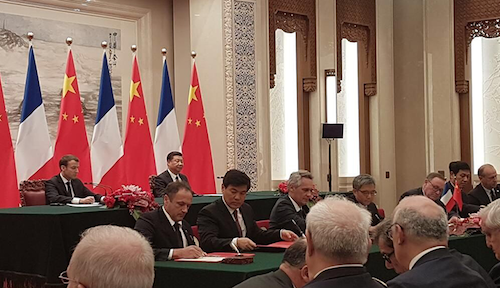 Emmanuel Macron, France's president, sits next to Xi Jinping, his counterpart in China, during the recent signing of an agreement between Sigfox and Chinese telecare company Senioradom.

But despite its global renown and political connections, Sigfox is flailing. Since March last year, some of its most senior executives have quit or been fired, and others are likely to follow. It missed reported fund-raising targets in 2016, and this month published data showing the number of connections on its network is far less than previously implied. Its financial situation looks increasingly precarious. (See Sigfox Sheds More Senior Staff, Including North America CEO.)

The chief problem lies not with the Sigfox technology -- despite the challenges this now faces from rival networks -- but rather with Sigfox's management and commercial approach, including its arrangements with partners. So-called Sigfox network operators, or SNOs, are tied to onerous contracts that have been described as "unethical" by one source in that community. In its desperation to hit lofty coverage targets and amass users, it appears to have overextended. Last year, there were signs of customer dissatisfaction. This year, it has acknowledged that network rollout in the US has fallen behind schedule.

At the root of all this, and almost synonymous with Sigfox, is the larger-than-life figure of Le Moan, the co-founder who today leads the company as CEO. Said to be a close friend of Macron, he was in 2016 inducted into France's Légion d'Honneur, its highest order of merit, and has been described as a visionary by those who know him. Yet he has also been accused of pride and stubbornness, of refusing to adapt the Sigfox business model despite a backlash from partners and his own executives. Notwithstanding his flair, he is to critics the cancer that ails the company. Excise that and Sigfox might have a better chance, is the implication. And the upheavals of the last few months lend support to the narrative that Le Moan must adapt, depart or watch his company fail.

Taking flight
Originally designed for submarine communications during the First World War, the technology was nearly 100 years old. But Christophe Fourtet, a radiofrequency engineer who had previously worked at Motorola, could see its twenty-first-century value.

While much of the industry was obsessed with pumping more data over radio connections, Fourtet had figured out that ultra-narrowband systems dating back to the early twentieth century could massively reduce power consumption, and costs, on modern-day networks.

Ludovic Le Moan, Fourtet's eventual partner in Sigfox, saw an opportunity in the nascent M2M market. Having already started and sold an M2M services company called Anywhere Technologies, Le Moan knew that sector as well as anyone. Still in their relative infancy in 2009, M2M networks could be used to provide connectivity for all manner of dumb devices and objects -- electricity and gas meters, industrial control systems in factories, vending machines. Just about anything, in fact, that might be worth connecting and typically place few bandwidth demands on a data network.

Therein lay the problem. Despite interest in the potential of M2M, and some examples of actual deployments, existing mobile networks were not built for it. They had first taken shape to support basic voice and text-messaging services. Later, following the award of 3G licenses in the early 2000s, they were adapted for "bandwidth-hungry" applications, such as mobile gaming and video. But the cellular industry had largely bypassed M2M, and so M2M's pioneers had been forced into an awkward compromise. Running M2M services over 2G and 3G networks was technically possible, but it was far from ideal economically -- and sometimes prohibitively expensive.

Lab-bound egghead and flamboyant visionary, Fourtet and Le Moan seemed the perfect complement for a technology startup. Using ultra-narrowband technology in unlicensed spectrum bands, Sigfox would be able to design networks catering solely to the M2M marketplace, they realized. It could undercut cellular rivals already supporting some M2M services. More importantly, it would create opportunities where high connectivity costs had previously been an insurmountable barrier.