It is several weeks before Michael Myers traditionally whips out his Halloween mask and reaches for his dagger, but the seasonal horrors are already piling up in the UK. Blaming them on Brexit has become de rigueur among Remainers. Their reaction to scenes of fuel droughts, empty supermarket shelves and labor shortages has been a mixture of mock fright and I-told-you-so glee.

While Brexiteers are usually right to insist the UK's exit from the European Union (EU) is not the main villain, denying responsibility for the latest scare will be harder. During an interview this week with the BBC, Intel boss Pat Gelsinger uttered the B-word in ruling out the UK as a possible location for one of his new chip factories. "Post-Brexit  we're looking at EU countries and getting support from the EU," he is quoted as saying.

But if Brexit is the only monster in this story, Gelsinger could have decided against the UK months ago. It has, after all, been in the script since 2016, and it became a fait accompli just before Gelsinger was named Intel CEO in January. Brexit might have reduced the UK's attractiveness to manufacturers, but Gelsinger would have known that when he was still at VMware, in talks about the Intel job. 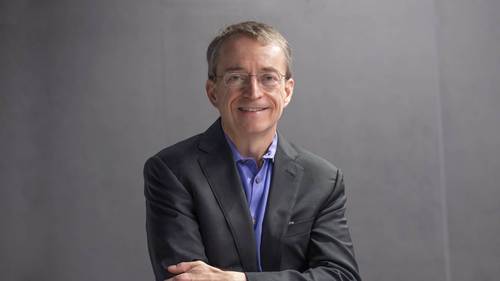 Intel boss Pat Gelsinger will not be constructing one of his new fabs in the UK.

Much newer than Brexit is the coronavirus and EU plans for a 750 billion ($867 billion) recovery fund, which policymakers seem eager to throw at strategic and technology initiatives rather than destitute hotel owners. Accompanying this is a bold vision to double Europe's share of semiconductor production to about 20% by 2030. If the UK has similar ambitions, they have not been made public. And it could not hope to match the EU's total budget.

One of Intel's goals is to be more competitive against Taiwan's TSMC and South Korea's Samsung in the market for cutting-edge silicon, where it has fallen behind. For companies that need chips based on the latest 5-nanometer designs, Asian manufacturers are the only option today. With chips still in short supply, and China bullying Taiwan, governments are suddenly nervous about semiconductor security. That explains why Europe is courting Intel and its rivals.

Regardless of Brexit, the UK must have looked unappealing to Intel for numerous other reasons. While it is home to 19 chip factories (or fabs), many are quite old and most use 150- to 180-nanometer processes. The semiconductors they produce are still essential to many industries. But gearing UK fabs up to the later designs that have caught Intel's fancy would demand a huge investment.

Starting from scratch would require an even bigger one. According to one expert who spoke with Light Reading on condition of anonymity, building TSMC-style facilities could potentially cost about $20 billion and take around five years. One stepper  the critical machine used to make the chips  carries a price tag of about $100 million, he says. The market dominance of ASML, a Dutch company that produces these steppers, is a further risk factor.

Besides being home to ASML, Europe has some fabs that are less antiquated. Repurposing these and moving to smaller nanometer designs would be feasible, and it would be less expensive than building anew. The uncertainty is whether Intel can obtain access to or ownership of facilities that are not currently in government hands.

Whatever the exact reasons for Gelsinger's UK avoidance, it leaves the government in a potentially awkward position. A state-of-the-art fab built by Intel would have created a domestic supply of high-end chips. The government's ability to attract other chipmakers will now be in doubt. But setting up a fab without them would be a huge and costly undertaking. The alternative is to continue relying on fabs in other parts of the world  including some threatened by China.

None of this necessarily means building a UK fab would be a good idea. Intel has promised to invest up to 80 billion ($92 billion) in European fabs alone, while TSMC and Samsung are reportedly planning global investments of $100 billion and $205 billion respectively over the next three years. With all that activity focused on cutting-edge designs, today's semiconductor shortages could be succeeded by a capacity glut at the high end of the market. Someone could be left with a lot of expensively produced chips and no one to buy them.

Like what we have to say? Click here to sign up to our daily newsletter
COMMENTS
Newest First | Oldest First | Threaded View
Add Comment
Be the first to post a comment regarding this story.
EDUCATIONAL RESOURCES
sponsor supplied content
eBook: Monetize the Enterprise - 6 Ways to Capture the B2B Opportunity
eBook: The 3 Key Digital Mediation Challenges - And How to Solve Them
Case Study: APAC CSP Boosts Efficiency of Enterprise Operations with CSG
Private 5G Networks and Testing
Which Path to Convergence Is Right for You?
Data Center Top Tips: 10 Issues That Can't Wait
DDoS Trends Report
The Challenge of 5G Security
Building the 5G experience
Grow Your Revenues With Innovative Customer Engagements and Business Models
Educational Resources Archive
More Blogs from Morris Lore
Musk says Twitter has the X factor after all