Startup Ossias Forever Tracker wireless power technology has been approved by the FCC and adopted for use by Walmart, starting deployments later this year.

Ossia is working to develop and market the Forever Tracker with T-Mobile and Xirgo Technologies.

Ossia says that the Cota Power Receiver, embedded into any device initiates a "conversation" by sending a beacon signal, which indicates its readiness to perform a task -- to find a Cota Power transmitter. The transmitter then sends power back in the same exact paths. This "conversation" between device and transmitter happens 100 times a second to send power safely to devices at a distance while in motion.

"Ossias initial certification covers a Cota transmitter operating at 2.4 GHz for deployments in commercial, industrial, and business environments, at a distance of up to one meter," the company says of the Cota system. The Cota RF signal meets FCC Specific Absorption Rate (SAR) requirements -- for humans and other objects -- without requiring motion detector or an exclusion zone.

Each Forever Tracker device can recieve up to 2W of RF power while being charged. The devices will be start to be used in asset trackers at Walmart distribution centers this year, with further commercialization happening in 2020. 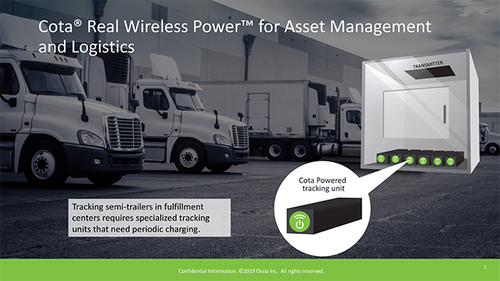 T-Mobile says that the Forever Tracker can also use its NB-IoT 4G network to track assets. To address Walmarts massive supply chain with dozens of distribution centers across the country, Ossia is leveraging the unique advantages of T-Mobiles nationwide NB-IoT network, the first in the U.S., to keep devices powered and provide a cost structure that enables deployment on a massive scale, said Mike Katz, Executive Vice President of T-Mobile for Business, in a statement.