MetTel launched the IoT Single SIM today, a cloud-connected chip that connects automatically to the strongest signal in any location.

MetTel claims that this is the first Single SIM that can securely and automatically connect devices to the IoT with the strongest signal via the four major US and 650 worldwide carriers, covering over 160 countries, but that information wasn't independently verified. Currently MetTel says five large (unnamed) customers are using the technology, which was available on limited availability until today's launch. (See MetTel Launches First IoT Single SIM.)

"We haven't found anything [like this] out there ... and we work essentially with everyone," said Max Silber, vice president of mobility and IoT for MetTel, in an interview with Light Reading. "We went out and created our own solution simply because we couldn't find anything comparable that was going to give us this level of flexibility and this level of access," he added. 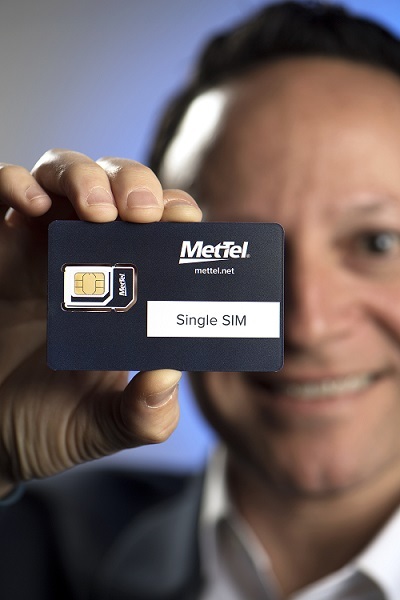 The service provider has about 10,000 B2B customers globally, and their focus on mobility infrastructure "very quickly morphed into IoT requirements as companies were really introducing connectivity into the process flow to try to improve how they deliver services," said Silber.

Gartner predicts that 20.4 billion connected devices will be in use worldwide by 2020, and with this rapid growth in the IoT and machine-to-machine (M2M) market, consistent connectivity of devices is increasingly front-of-mind for service providers and enterprises. (See Paving the Way for IoT Security .)

"The concept of the IoT Single SIM solves the problem that we consistently ran into which was just not having great coverage on a single provider everywhere, and by everywhere I mean around the world," he added. "Some carriers launched a one-SIM product, but that product is more limited to the roaming agreements they signed with several carriers around the world. We needed something that really addressed having the ability to have connectivity everywhere."

According to Silber, the IoT Single SIM can utilize the "best-in-breed signal" by choosing the provider based on signal strength, instead of selecting primarily on cost. Specific to IoT, selecting providers primarily for signal strength is also economical as the technology deals with micro plans, instead of the high-data plans that are generally more expensive, he added.

"We've removed the constraint we've had to deal with historically which is not knowing what connectivity to send to any given endpoint," he said. "In this case, we're just relying on a single source solution to be able to turn on, find the best signal and work."

The MetTel Single SIM provides real-time data on product status and location of connected devices, and archives session activity for the past 48 hours. It also includes geo-fencing functionality to self-report when devices have reached their destination or generate an alert if the device is moved. Typically geo-fencing would require adding additional components like GPS to the chipset, but the IoT Single SIM instead uses cellular tower triangulation to map the coordinates and physical location of connected devices, said Silber.

MetTel's IoT Single SIM can be utilized by clients from varying industries such as healthcare, retail, utilities and original equipment manufacturers (OEMs), and the chip could be used for product distribution, asset tracking, remote patient monitoring and more. This technology "allows [manufacturers] to remove some of the guesswork of which SIM connectivity do you ship with which unit because in this case wherever they ship it, as soon as they plug it in and it has a power source to the unit, it will find the local network and it will work."

While the IoT Single SIM resides on a hardware chip, it utilizes an "eSIM-ready infrastructure" to enable more control over the IoT Single SIM's transition over different carrier networks, should there be coverage issues or a carrier decommission a network, for example.

"An eSIM essentially has the endpoint morph itself into a different carrier ... We're essentially building an infrastructure where through our cloud infrastructure, we're able to remotely change the identity of that SIM card," said Silber. "Now it's not an eSIM technology because eSIM isn't widely used just yet, it's still very preliminary as well as very expensive for the applications that have been tested so far. So we're using traditional SIMs but we're putting controls [for] changing their identity on the cloud."